Last month, Justin Trudeau became the Prime Minister of Canada. Now, he's campaigning to win over the rest of the world, one McLuhan-inspired image at a time.

Mr. Trudeau's appearance this week in two U.S. glossies – The New York Times Magazine and the high-fashion bible Vogue – gave new fuel to his critics, who will never forgive him his good hair.

To them, he is and will remain the Selfie PM, more invested in perfecting his pout than his policies.

First, Mr. Trudeau has a short window of opportunity in which to exploit the international media's curiosity about him and thus kick-start a rebrand of Canada on the world stage.

Second, all media are now international, which allows Mr. Trudeau to speak simultaneously to foreign audiences and supporters at home who might be a little bit thrilled to see him nestled amid the spreads of $10,000 winter coats, hot celebrities and cool cocktails.

Third, outlets such as Vogue are natural platforms for the first Instagram prime minister.

(Then, of course, there is this: In 1964, four years before Pierre Elliott Trudeau became prime minister, the Canadian techno-sage Marshall McLuhan predicted, "Politics will eventually be replaced by imagery.")

For the shoot in January's edition, Vogue tapped the Montreal-born photographer Norman Jean Roy, who executes high-priced shots of movie stars and models for Vanity Fair, Allure and other celebrity-stuffed magazines. Vogue's choice of writer was just as noteworthy: John Power, a man who, in addition to covering politics for the magazine – he wrote about Naomi Klein last year – also serves as its film critic.

He understands the power of images and cinematic language, even if his profile of Mr. Trudeau proved uninterested in exploring it.

Mr. Trudeau may not be young enough to be a digital native, but he has the intuitive intelligence of one.

He has shown that in the past on his Instagram feeds, cannily blending shots of himself on the campaign trail, holding his son Hadrien above his head during a Pride march, and posting a selfie of himself in soft-focus giving the Vulcan salute in memory of Leonard Nimoy.

So it made sense that the two images of Mr. Trudeau released on Wednesday – one of him and his wife Sophie in an art-directed embrace; the other, a black-and-white shot of him alone, in mid-thought – were quickly reposted on Instagram.

With its emphasis on imagery over text – or, as McLuhan might have suggested, images over politics – the social-media network has become the platform of choice for celebrities to communicate with their uncritical fans, without interference from intermediaries.

On Twitter, followers expect a conversation, which can get messy; Instagram, however remains primarily a broadcast outlet.

Some critics complained about the choice to appear in Vogue, and charged that it was inappropriate for Ms. Grégoire-Trudeau, who was wearing an Oscar de la Renta dress, to help sell a high-priced designer, though you might also argue the design house was helping to sell the Trudeaus.

On Twitter, Mr. Trudeau's adviser Gerald Butts defensively noted that Vogue has a history of profiling politicians – Aung San Suu Kyi, Condoleezza Rice and Hillary Clinton have appeared in its pages – and that Nelson Mandela guest-edited an edition in 1993.

Others defended Mr. Trudeau's choice and suggested that the criticism, in dismissing a women's magazine out of hand, was sexist in nature. (Indeed, Mr. Butts retweeted a photograph of the December issue of GQ, which features Barack Obama, apparently without controversy, on the cover.)

"Trudeau is interesting on a number of levels," said Ian Austen, the Canada correspondent for The New York Times, who wrote a well-read profile of Margaret Trudeau for the paper last month. "Canada has rejected the right, effectively, at a time when it looks like a number of countries are thinking of embracing it again – which is a huge thing." He added that Mr. Trudeau's platform planks of deficit spending and marijuana liberalization are also unusual.

"His whole 'Sunny Ways' rhetoric is quite atypical. It's not an optimistic time, globally, and a politician who manages to get elected in this environment with that kind of message, that's pretty interesting."

Why did Team Trudeau decide to co-operate with The New York Times Magazine and Vogue? On Thursday, the Liberals said they had received a huge number of requests from international media after the election, including opportunities for TV interviews with big networks.

The logistics were easier with the two magazines, both of which offered an audience worldwide, but also at home.

"Obviously both outlets have huge reach in Canada, and we were happy to make something a little different work." 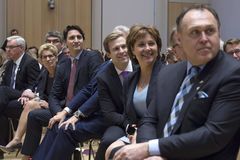