Former governor general Michaelle Jean was among those Canadians who sharply criticized U.S. President Donald Trump on Friday for reportedly using vulgar language to describe Haiti and countries in Africa.

Jean, who was born in the Haitian capital of Port-au-Prince and is currently secretary general of the Organisation internationale de la Francophonie, called Trump's reported remarks "insulting."

"It was so disturbing this morning to hear President Trump's comments reported all over the news calling my poor native land and African countries 'shithole' nations," Jean said in a statement to The Canadian Press. "It is such an insult before humanity."

Trump was widely reported on Thursday to have questioned in a meeting with lawmakers why the United States should accept more immigrants from Haiti and "shithole countries" in Africa rather than from places such as Norway.

On Friday morning, Trump tweeted that he used "tough" language at the meeting, but not the reported vulgarity. Still, Jean, 60, who was Canada's governor general from 2005 to 2010, made no bones about her feelings.

"For the first representative of the United States of America to speak in such a manner is quite troubling and offensive," Jean said in the statement.

Jean, a refugee from Haiti who came to Canada in 1968 and was raised in Thetford Mines, Que., also noted that Friday was the eighth anniversary of a devastating earthquake that struck her native country, one of 57 member French-language countries – many from Africa – that form La Francophonie.

Speaking in London, Ont., Prime Minister Justin Trudeau said he would not "opine on what the president may or may not have said" but called Canada a country of openness and respect.

Trump's reported comments were also taken personally by Dr. Andrew Furey, an orthopedic surgeon in St. John's, N.L., and founder of Team Broken Earth, a group of medical professionals who responded to the Haitian earthquake in 2010 and has since returned to the country several times.

"In addition to being insulting to us, more importantly it's quite disrespectful and insulting to the people that we're trying to help and the friends and colleagues that we've made there over the last eight years," Furey said in an interview. "It's profoundly disappointing to hear someone in that office use that language."

While Trump's various statements have frequently been deemed offensive, Furey said that's no reason to accept them. It's incumbent on everyone as global citizens, he said, to challenge the president's views on countries outside the U.S., especially those that are poor and in need.

Some have defended Trump's pronouncements as straight talk.

"Trump is absolutely right," said Mamady Traore, 30, a sociologist in Guinea. "When you have heads of state who mess with the constitutions to perpetuate their power. When you have rebel factions that kill children, disembowel women as saints, who mutilate innocent civilians."

"(I) have known many fine Haitians – including a former governor general of Canada," Campbell said in a tweet. "Trump is unworthy to speak of them!"

"I don't know what kind of brain he has because he just forgets the history of the world," Villefranche said. "He forgets the U.S. is an immigrant country."

The African Union said it was "frankly alarmed" by Trump's comments.

"Given the historical reality of how many Africans arrived in the United States as slaves, this statement flies in the face of all accepted behaviour and practice," union spokeswoman Ebba Kalondo said. Botswana's government called Trump's comment "reprehensible and racist," while Senegal's President Macky Sall said he was shocked.

– With files from Associated Press. 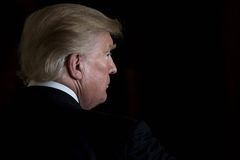 Trump uses profanity to disparage Africans as he rejects bipartisan 'Dreamers' plan
January 11, 2018
updated
'Frankly alarmed': Africans furious at Trump’s reported insult
January 12, 2018
Report an error
Due to technical reasons, we have temporarily removed commenting from our articles. We hope to have this fixed soon. Thank you for your patience. If you are looking to give feedback on our new site, please send it along to feedback@globeandmail.com. If you want to write a letter to the editor, please forward to letters@globeandmail.com.
Comments are closed