At long last, the Maud will float home.

After years of trying to persuade Ottawa to allow Norway to reclaim the famed schooner sailed by legendary polar explorer Roald Amundsen – and which is currently resting partially submerged in Nunavut's Cambridge Bay – Norwegians have set their plans to retrieve the ship from its resting place of 82 years.

With a price tag of $5-million to $6-million – or more if necessary – the raising of the 300-tonne vessel that is now scheduled for next summer will be a challenging technical feat, relying on simple physics.

" 'There is no bad luck' Amundsen used to say, 'only good preparations,' " said Jan Wanggaard, manager of the Maud Returns Home project. His team has completed plans to raise the Maud after spending several weeks in late-August at the site conducting final research. "Of course, we're expecting the unexpected as we try to raise the Maud. But I'm confident our plan will work."

The Norwegians are hoping to make the Maud the centrepiece of a new museum built specifically for the ship. Mr. Wanggaard has taken small samples of wood to Norway, so that the experts can determine the best temperature and air-moisture conditions at which the ship must be kept to prevent future disintegration.

Named for Queen Maud of Norway, Norwegians believe the oak-hulled ship played a significant role in the building of the nation and its cultural history.

Launched in 1916, it was designed for Mr. Amundsen's voyage to the North Pole. Mr. Amundsen made his name as the first explorer to reach the South Pole. Although the Maud did not reach the North Pole, it still made a famous foray into the Northwest Passage, and its crew collected scientific data and took meteorological, geophysical and oceanographic measurements.

"It holds a really special place in our hearts," Mr. Wanggaard said. "But we know it also is important to the people in Cambridge Bay, who are used to seeing it every day."

The ship had been left to deteriorate ever since it became lodged in the ice because Cambridge Bay does not have the technical expertise to save it, said the hamlet's mayor Jeannie Ehaloak.

Abandoned by Mr. Amundsen after three failed attempts to reach the North Pole, it was purchased by the Hudson's Bay Company and used as a floating machine shop, warehouse and wireless station. It issued the first regular winter weather reports for Canada's Arctic coast. After developing a leak, it sank at its winter anchorage in Cambridge Bay in 1930.

Currently, only a small area of the ship's starboard side is visible, while the rest sits on an angle on the seabed.

"I think the people accept it means more to Norwegians than to us," Ms. Ehaloak said, who can see the wreck from her home. "After all, we didn't have any plans to raise it. If there was a boat out there that had something important to do with Inuit history, we would want it back, too."

The Hudson's Bay Company sold the ship for $1 in 1990 to Asker, a wealthy seaside suburb of Oslo, where the ship was built, with the expectation that she would be returned to the port. But the permit from the Canadian government expired while funds were being raised, and the Maud remained in her watery grave.

Earlier this year, a private enterprise led by Mr. Wanggaard appealed to the federal government again for permission to retrieve the ship. While the state of Norway isn't involved, the embassy in Ottawa presented an application on behalf of the private enterprise at the Canadian Cultural Property Export Review Board in March.

"The application had to be forwarded by a resident in Canada, so that's how we got involved … to try and place this ship in the historical context of Norway's heritage," said Tobias Svenningsen, minister counsellor at the embassy.

"We have a long tradition of maritime exploration going back to the Viking age, but this was the only boat built for Amundsen and he oversaw its construction," Mr. Svenningsen said.

While the part of the Maud that is exposed to the air all year seems nearly unchanged from pictures taken in the early 1990s, Mr. Wanggaard said the area submerged roughly two metres down is constantly exposed to tearing from the winter ice.

Still, his team has confidence in the structural strength of the Maud because it hasn't yet rotted underwater or been damaged by micro-organisms.

The team of 10, a mix of three divers and other engineering experts, will use air buoyancy to move the Maud, Mr. Wanggaard explained. She will then be guided 6,850 kilometres across the Northwest Passage and Atlantic Ocean by an ice-breaker tug back to the naval museum in Vollen, Norway.

As a token of thanks for the soon-to-be-gone Maud, the team built a cairn – a traditional Norwegian memorial made of rocks – next to the site.

"Definitely I will miss it," said Ms. Ehaloak of the ship, adding, "but the cairn is nice and it was very well received by the community." 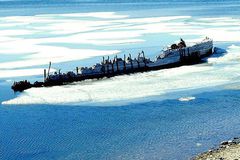 Norwegian to plead for return of Amundsen's ship
March 12, 2012 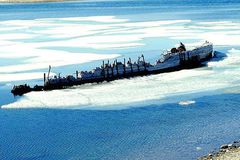