It's Ottawa's turn for the uneasy lessons of sex ed.

With school restarted, so is the standoff over Ontario's new health curriculum, and some angry parents say they're determined to send a message to federal Liberals over provincial frustrations.

Voters say the curriculum has the capacity to sway the outcome of at least one riding – Don Valley West, home to the Toronto neighbourhood of Thorncliffe Park, where hundreds of parents home-schooled their children this week in protest. Many of them say they see sex education as a sign that the Liberal Party has become less friendly to immigrants, particularly religious Muslims.

For the local Liberal candidate, it doesn't help that several Toronto-area Conservative candidates have made the sex-ed school curriculum part of their campaigns. When he knocks on doors in Thorncliffe Park, former Liberal MP Rob Oliphant – who held the riding from 2008-11 – has been breaking, gently, with his provincial colleagues' line on the issue.

"I'm not running provincially, I'm running federally, but ... I will stand with the Thorncliffe community," he said in an interview. "I think the implementation of the curriculum needs to be looked at."

Avoiding the conversation is not an option, he said. It's usually one of the first things that comes up.

Voters in Thorncliffe Park take sex ed more personally than most. Liberal Premier Kathleen Wynne, who many hold responsible for the brand-new sex-ed lessons, is also their MPP and has met many of them during her 12 years in office.

Mr. Oliphant served as multiculturalism critic during his term in Ottawa, losing his seat in 2011 by less than 700 votes to Conservative John Carmichael.

The curriculum went into effect on Tuesday, the first day of school. On rainy Wednesday, for the second day in a row, children attended makeshift "classes" in a park within sight of Thorncliffe Park Public School. Next to a sign reading "Grades 1 & 2," two women wrote on a whiteboard in front of more than 50 children seated on a tarp.

"What goes at the beginning of a sentence?" one woman asked.

"A capital!" the children shouted.

Parents in the park complained that the curriculum introduces certain topics too early and that it presents homosexuality as an acceptable, normal way of life, when that counters Islamic teachings. They said their protests have gone unacknowledged.

"It's months we are on the streets," said Khalid Mahmood, a father of five, referring to protests by parents.

Some parents are talking about forming a home-schooling co-op, and another father, Azeem Mohammed, said he has booked the basement of the local library for a month to move the impromptu school indoors. About 430 registered students were absent from Thorncliffe Park on Wednesday, though that was an improvement from Tuesday, when about 700 children were missing, said Toronto District School Board spokesman Ryan Bird.

On Wednesday, Ms. Wynne told the media she was dismayed to hear of the absences and of graffiti on Thorncliffe Park school, where the words "shame on you" had been spray-painted overnight.

She said the health curriculum, last updated in 1998, was written after asking 4,000 school council chairs for comment and consulting 70 public-health and parents' organizations. Ms. Wynne isn't considering withdrawing the curriculum but "will always talk to people who have questions," she said.

She met with some Thorncliffe Park parents this week and reassured them that they can excuse their children from the lessons, she said. Individual schools will make those decisions on a case-by-case basis, the Ministry of Education said in a statement.

Mr. Oliphant said he supports the principles of the curriculum but thinks it could be taught in a sensitive way, recounting how he helped broker an arrangement at another school to allow Muslim students to pray in the cafeteria on Fridays.

Conservative candidates Kyle Seeback and Parm Gill, running in Brampton, have both sent out campaign materials about sex ed, according to media reports. Federal Conservative candidates are "deliberately misleading Ontarians" into thinking sex ed is relevant to the election, said Celina Caesar-Chavannes, the Liberal candidate in Whitby.

Mr. Oliphant said he believes other federal candidates have told Thorncliffe Park residents that they have some power to intervene on the issue. "I say, 'Listen, no one can,'" he said.

Mr. Gill, Mr. Carmichael and the Conservative Party of Canada didn't respond to requests for comment.

Mr. Mohammed, who voted for the Liberals in the last election, said he sees sex ed as a second betrayal after the party's support for anti-terrorism bill C-51, which he said creates the kind of "police state" that "people came to Canada to avoid." He and other voters said they weren't sure if they would swing left or right in this election.

"We want to completely wipe out the Liberals," said Saeeda Sadaf, a mother who was at the makeshift school in the park.

Mr. Oliphant said he steers voters back to Liberal policies on immigration, citizenship and refugees, but that hearing them out on sex education has become part of his campaign now, too. 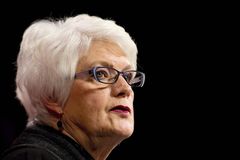 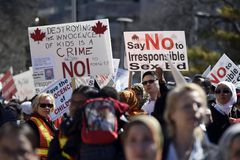 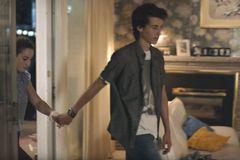