Some scientists just want to explore Jupiter. Moritz Heimpel is building his own.

The University of Alberta physicist is part of a team that has harnessed one of the world's top five supercomputers at the Argonne National Laboratory near Chicago, to create the most detailed simulation yet of Jupiter's atmosphere and dynamic interior.

The goal is to understand how Jupiter – by far the solar system's largest and most energetic planet – actually works, including how it generates a magnetic field that is 10 times stronger than Earth's.

Yet, Dr. Heimpel is not so buried in his virtual world that he doesn't care about the real thing. So, he will be paying particularly close attention on July 4, when NASA's Juno spacecraft does something that's never been done before: fly around Jupiter's north and south poles.

Until now, Jupiter has only been observed from vantage points around its equator – and at reasonably safe distances. "But when you cross lines of latitude, that's when everything changes," he said.

As the first mission to provide the over-and-under view of Jupiter – at times passing within 5,000 kilometres of the planet's swirling cloud tops – Juno is expected to provide reams of data that will allow Dr. Heimpel and his colleagues to test and further refine their computer model. As the mission progresses with a series of steep, swooping dives around the planet every two weeks, researchers hope the observations and theoretical work together will serve to answer some of the most fundamental questions about Jupiter, including its origins and what role it may have played in our own existence.

"One of our primary goals is to learn the recipe for solar systems," said Juno's principal investigator, Scott Bolton, during a mission status briefing in Washington on Thursday.

Jupiter contains more mass than all the other planets combined so understanding exactly how, where and when it formed is of central importance to the history of the entire solar system.

One of the key questions Juno may be able to address is whether Jupiter has a solid core located deep within its mainly liquid hydrogen and helium interior. If such a core is present and detectable, it would provide an important clue about how and when the building blocks of all the planets first condensed out of the diffuse cloud of primordial material that swirled around the infant sun 4.5 billion years ago.

Juno will learn what it can about Jupiter's interior each time it makes a close approach by probing the atmosphere with microwaves and by recording detailed measurements of the planet's gravitational and magnetic fields.

But spying on the inner workings of a behemoth does not come without risk. To achieve its goal, Juno will brave clouds of electrically charged particles that whip around Jupiter's magnetic field like bullets and could disable Juno's sensitive electronics if they penetrate the spacecraft.

"Jupiter is a planet on steroids. Everything about it is extreme … and we're going right next to it," Dr. Bolton said.

To improve the chances of success for the $1.1-billion (U.S.) mission, the spacecraft has been designed like an armoured vehicle. Its most delicate hardware is located inside a "radiation vault" with titanium walls 1.2 centimetres thick. The vault is expected to cut down on radiation exposure by a factor of 800. But whether that will be enough is an open question because no spacecraft has been put in such a situation before.

"It's terra incognita," said Fran Bagenal, a planetary scientist at the University of Colorado in Boulder and a member of the Juno team. "We don't really know what the environment is."

One part of the scientific payoff that Dr. Bagenal said she is most looking forward to will be getting a good look at Jupiter's aurorae – curtains of visible and ultraviolet light that are supersized and super-energized versions of Earth's Northern Lights. In Toronto this week to give a public talk about Juno and other planetary missions, she added that Jupiter also offers a key to help understand the stories of thousands of other solar systems that have been discovered in recent years, many containing planets similar in size or even larger than Jupiter.

Sabine Stanley, a University of Toronto physicist and collaborator on the computer-simulated version of Jupiter, noted that Earth's magnetic field is important to life because it helps shield us from dangerous particle radiation from the sun. But Jupiter's magnetic field is easier to study in many respects because its source does not lie buried under thousands of kilometres of rock. Data from Juno may therefore provide a better window into how magnetic fields behave on planets elsewhere in the galaxy.

"We'd like to know what roles magnetic fields play on other planets, including the possibility of life on those planets," she said.

updated
Mercury passes between Earth and sun for first time in a decade
May 9, 2016 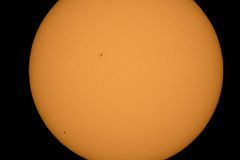