In the fall of 2010, Mohamed Hersi met a kindred soul through his work as a security guard in downtown Toronto. The two young men, whose families had hailed from the Horn of Africa, became fast friends – and that was when Mr. Hersi began to utter warnings.

"That's when someone is trying to entrap you," Mr. Hersi explained, "sitting there talking to you and basically wearing a wire."

This, at least, is the recollection of the former friend, who was actually an undercover police officer – "U.C." in police parlance – using notebooks to log everything Mr. Hersi said. In testimony on Monday, the officer even recalled the two men took the batteries out of their cellphones while walking en route to a Raptors game, before confiding to each other that they each wanted to go to Somalia to join an Islamist insurgency group known as al-Shabab.

The police officer, whose identity can't be published by court order, started giving evidence Monday in a new trial in a Brampton courtroom. Few outsiders are attending beyond Mr. Hersi's family and security officials, but the evidence is yielding important insights into how Canadian authorities can infiltrate the lives of suspected extremists – before they ever get the chance to gravitate to violence.

South of the border, where such techniques are used more frequently, groups such as the American Civil Liberties Union are sounding the alarm about federal police overrelying on those techniques. But there is far less dissent in Canada, where terrorism prosecutions can also rely greatly on infiltrators. In 2006, detectives paid millions in expenses for two police agents who got inside the so-called Toronto 18 terrorist cell; last year, an undercover U.S. FBI officer was brought to Canada to help secure arrests in an alleged plot against a passenger train.

And in March of 2011, Mr. Hersi – now 28 – was taken into custody at Pearson airport holding a boarding pass for Cairo. Police allege he was actually en route to join the al-Shabab terrorist group in Somalia. A newly filed "agreed statement of facts" speaks to previously secret evidence – including that Mr. Hersi was carrying $6,000 and a "black spy pen" when he was arrested.

The investigation started six months earlier when Mr. Hersi's dry cleaner called the police, after finding a memory stick with The Anarchist's Cookbook explosives manual in his bag of clothes, according to the admitted facts.

Police rushed to find a young cop Mr. Hersi might confide in and gave him a crash course in working undercover. The officer began visiting Mr. Hersi at his downtown workplace, on the pretext that he was a consultant canvassing opinions from security guards.

Over the next few weeks, the two men became fast friends, hanging out at shawarma restaurants and shopping malls, and during Friday prayers at the Salaheddin mosque in Scarborough.

The officer testified Monday that Mr. Hersi said he knew a Toronto man who had previously joined al-Shabab, and Mr. Hersi frequently intimated that he wanted to follow suit. For his part, the officer initiated conversations about a notorious English-language al-Qaeda propaganda article that was making the rounds at the time – called "How to Make a Bomb in the Kitchen of Your Mom."

Mr. Hersi is said to have been familiar with the article and to have urged utmost caution in downloading and handling such material. Even so, the agreed statement of facts says that The U.S. Navy Seal Sniper Training Syllabus and The Anarchist's Cookbook were found on his laptop at the time of his arrest. 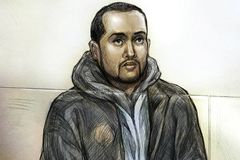