I don't know what trouble brought a police car to a house on my block in Montreal this week, but something was definitely wrong with the cruiser. It had a big red sticker on it, in the middle of the hood. It was one of thousands of protest stickers that, according to an arbitration panel ruling earlier this week, Montreal police must remove from their cars and division offices.

"Libre négo," the sticker said – free negotiations. Other stickers on the windows of my local police station say "On n'a rien volé" – we have not stolen anything. That seems an odd complaint until you remember how many Quebec politicians have been investigated for theft or fraud. Police protest in this city is nothing if not heavily coded.

Both kinds of stickers relate to a two-year-old dispute over provincial legislation that forced police officers and other municipal workers to contribute more to their pensions. The police association argues, not unreasonably, that this sort of measure should be worked out at the bargaining table, not in the Quebec National Assembly.

The police association says its officers will not scrape off any stickers until it considers its legal options. But the stickers and the tactic of wearing red caps and anything but regulation trousers are steadily scraping away at both the image of the police force and the psychological foundations of policing.

Some cops got quite creative about putting the stickers on their vehicles, fashioning arrows and other shapes that bring to mind the flames some car buffs apply to their customized chassis. Other officers just plastered the stickers all over, making their cruisers look like well-traveled steamer trunks.

The uniform protest is the more profound gesture, for reasons laid out 250 years ago by Frederick the Great. "Without uniform, there is no discipline," the Prussian monarch said, explaining with one phrase why the trend he started – of kitting out troops in closely regulated duds – quickly swept across Europe. A military or police uniform shows that the individual body fits into a precise hierarchy controlled by the state. It is the sign of order and obedience, and it works most deeply on the person who wears it.

When I see a cop in pink camo pants or leopard-print tights – more rare, but documented – I wonder what it costs the officer to put that on in the morning. It is not only against regulation; it is against all the training they received. It runs counter to the notion that order radiates from and is reflected into society from the uniformed body of the police officer. Perhaps that is why the protest is hedged by the decisions of most officers to stick to coloured camo – a uniform of sorts, although not the proper one.

Protest campaigns can be long and stubborn in Quebec. Students demonstrated over higher university tuition for months before triggering a crisis for the government of Jean Charest in 2012. The police show no sign of buckling, and no new legislation has appeared to stop their protest in spite of outrage after officers wore camo pants to the state funeral of former premier Jacques Parizeau in 2015.

One troubling antecedent for the police may be a historic revolt against uniforms that came from the top, not the ranks. A 1920s painting of the Ursuline nuns arriving in Quebec in 1639 shows the sisters coming ashore with their black habits in perfect order, their wide white collars spotlessly clean. In 1964, the Ursulines began giving up their traditional uniform for ordinary dress in response to a Second Vatican Council directive that religious orders "adjust their way of life to modern needs." We will never know for sure, but it is just possible that the abandonment of uniforms that had held such sway in the province for three centuries actually accelerated the drastic erosion of church authority after the Quiet Revolution.

It certainly demystified the church's power, and that should worry the police. People may feel no more inclined to break the law in front of an officer in "clown pants," as the unofficial trousers are known locally, but a long and determined show of lost standards may erode the special mixture of respect and fear most people feel about the police.

Oddly enough, the officers might as well be following Vatican II, because their uniform protest is also a reflection of "modern ways": the relentless trend towards casual dress in almost all situations. Casual Friday has become an everyday occasion at many work places. The so-called business uniform is normal only at old-line organizations, as Facebook founder Mark Zuckerburg dramatically showed when he wore a hoodie to a much-publicized meeting with Wall Street bankers in 2012.

How surprising to find the police catching up with a trend. How disappointing that they feel they must.

Rein in the clowns known as the Montreal Police
June 17, 2015 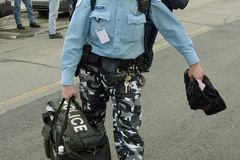 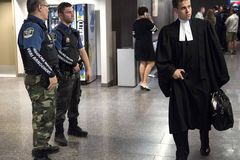