The University of Western Ontario is changing its name as part of a drive to go global, scrapping the nod to its home province in favour of the worldlier Western University.

The school's president, Amit Chakma, has been pushing for Western to become a more international institution since he was named the school's leader in 2009. The new brand, which has received mixed reviews from students and alumni, is a step toward making Western easily recognized around the globe.

"This is our way of declaring our intention that we are way past a regional school or a national school and we want to be international," Dr. Chakma explained on Thursday.

He said that when he came into his position in 2009, the school had only 126 first-year international students. This year, it has 400.

"I very strongly believe that our students must be given an opportunity to acquire global perspective. There are many ways of doing it; one is to internationalize our campus."

Along with the name change, the university launched a new logo – featuring the school crest – replacing the image of one of the university's towers. Western also defined exactly which purple it will use as in its official colours (Pantone PMS268), and commissioned a typeface called Hellmuth, after Western's founder, Bishop Isaac Hellmuth.

"This was about creating a unified voice, message and image for the university," said Western's vice-president of external relations, Kevin Goldthorp.

The rebranding campaign, which has been more than two years in the making, gathered input from thousands of faculty, staff, students and alumni, Mr. Goldthorp said.

Although the legal name of the school will stay the same – meaning transcripts and degrees will bear the traditional University of Western Ontario – Western University will be used in all official communications and branded materials.

This isn't the first time Western has changed its name: The school was founded as the Western University of London Ontario in 1878; in 1923, it became the University of Western Ontario.

Mr. Goldthorp said the shortened name won't be hard to get used to – it's used colloquially already. "The rationale to landing on the word 'Western' is that it's what people call us. It really is playing back what people are commonly using as a name to describe us."

The new name, as well as the old initials, UWO, were both trending on Twitter in Canada on Wednesday as students and alumni reacted to the news.

Some tweeted they were happy about the changes, others were ambivalent.

@ReporterApril tweeted: "I think 'Western' works. Always called it that anyway. 'Western University,' not so sure," while @martinSpeakers asked: "So if someone asks me where I went to school do I say UWO or Western University?"

Many were unhappy, such as @RyanAI87: "I went to the University of Western Ontario, NOT Western University. Please don't ever call me for a donation. Won't ever give to you now."

The uproar was something student-council president Andrew Forgione wasn't expecting. He was consulted on student reaction, but says the administration's enthusiasm was infectious.

Julian Uzielli, a third-year Western student, said he was on the fence. "On one hand, I do like the new logo. I think the old tower logo was dated," he said. "But the name … kind of bothers me a little bit."

A recent Western grad, Sean Kelly, was more incensed by the changes.

"It does offend me as an alumni that they would change the name of the institution that I went to, without us having any power over it," he said.

"It's flustering that incoming students and current students will have to go to Western University as opposed to UWO." 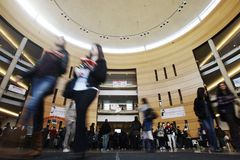