A controversial ad campaign on Vancouver's transit system showing the territory of Palestine shrinking into the state of Israel will run in other Canadian cities this fall, says the coalition behind the images.

"We do know that in other Canadian cities, for example in Toronto and in Calgary, there will be ads" running sometime this fall sponsored by advocates in those cities, said Charlotte Kates, a spokeswoman for seven Vancouver-based groups calling themselves the Palestine Awareness Coalition.

Kates said the images, which went up in Vancouver on Tuesday, show the steady occupation of Palestinian territory by Israel. The coalition got the idea for the "Disappearing Palestine" campaign from similar ads that have run in American cities like New York, Seattle and San Francisco.

"We wanted to draw attention to and shed light on the ongoing human rights violations ... against Palestinians," she said.

"The Canadian government has been such a strong voice in support of Israel ... so we think it's particularly important that people in Vancouver and other Canadian cities learn about what's happening in Palestine now and what's happened there historically."

Jewish groups have declared strong opposition to the ads, which are displayed at a wall mural in a Vancouver SkyTrain station as well as on 15 buses, and have tried to have TransLink, a government agency, remove them.

"We're disappointed that TransLink decided to run them," Anita Bromberg, national director of legal affairs for B'nai Brith, said in an interview from Toronto.

"It is contrary to their own rules and regulations," she said, as advertisements "shouldn't be derogatory of any one group, and the innuendo, the common understanding, would be to be very derogatory of Israel and it's supporters."

"In this day and age, where such supporters could be the target of hate, of violence or other acts of mischief, we feel that that regulation of TransLink should be interpreted quite broadly, understanding what the circumstances are around a campaign like this."

However, TransLink said in a statement posted to its website Tuesday that the ads will stay up because they comply with Canadian advertising standards and do not violate any human rights.

TransLink said it does not endorse nor advocate any positions put forward by outside advertisers.

In 2009, the Supreme Court of Canada struck down aspects of TransLink's policies that prohibited political advertising after a court battle between the agency, the Canadian Federation of Students and the B.C. Teachers Federation.

"The Supreme Court was very clear, in nearly an identical case except for the content of the ads, that TransLink as a government agency has got to respect freedom of expression," Josh Paterson, executive director of the B.C. Civil Liberties Association, said Wednesday.

"They've made this advertising service available on the sides of their buses and inside their buses, and they can't deny that to people just because the content of the message is political," he said. "It's pretty cut-and-dry from our perspective."

Bromberg said Jewish groups are very concerned that the ads may be coming to other Canadian cities, and said they're reaching out to those transit authorities.

"The focus has been on TransLink and why they're allowing the ads, but I think that there's a broader picture," she said. The pro-Palestinian coalition is "saying Israel is wiping Palestine, as they term it, off the map, but the reality is this is part of a campaign to do the opposite, and that's using different techniques to wipe Israel off the map."

However, Hani Faris, a political science professor at the University of British Columbia, argued the ads simply show "statements of fact" and the groups are overreacting.

"Those who did the ads did not violate any political standards that would be common and acceptable to Canadians ... They remain within the confines of the law concerning political expression and advertisements, and to say that they are against the Jewish people I think, personally, is with no grounds and I find it rather obnoxious," he said.

But Stephen Schachter, the co-chair for the Centre for Israel and Jewish Affairs, argued that if advertisements targeted non-Jewish groups, the situation would be taken more seriously.

"I can think of all sorts of other kinds of advertising by other communities, whether it's sexist, homophobic, anti-immigrant, anti-other-ethnic or religious groups that would be" prohibited, he said.

"We have members of the Jewish community who say they are not going to use transit and are very concerned about safety issues as a result of this kind of advertising."

Schachter said the current focus is on public awareness and he declined comment on whether his group might launch legal action against TransLink.

Bromberg added that launching a counter ad campaign is not in the works at the moment, but that may change.

"The importance is to let people know what the propaganda campaign is and public awareness, we hope, will make the difference."

Pro-Palestine transit ads will not be removed, TransLink says
August 28, 2013 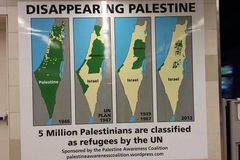