Former Canadian soldiers are killing themselves at a significantly higher rate than that of the general population, the government's most comprehensive examination of veterans' suicides reveals.

The landmark study, which was released on Thursday, shows that 1,486 former military members ended their lives from 1976 to 2012, with one-third of the suicides occurring after 2002, when Canadian troops were entrenched in the Afghanistan war.

Young men faced the greatest suicide risk, government researchers found. Suicide claimed 40 per cent of the 435 male vets who died before turning 25. These vets were 2.4 times more likely to kill themselves than their comparable population – a worrisome finding that is prompting a deeper look.

"It's not entirely clear why the rates for younger veterans are higher," said Alexandra Heber, chief psychiatrist with the Department of Veterans Affairs. "Because these are people who will have [been] released fairly recently, we're looking at the connection between that and the transition period."

"We know that there are a lot of factors that can contribute to suicide and complicate life soon after people have released."

Although the research offers the most detailed veterans' suicide count to date, it does not explore what factors may have contributed to their deaths or examine their work and deployment history.

The Globe and Mail began in 2014 investigating the suicides of soldiers who had served on the Afghanistan mission after the military would not disclose how many had taken their lives. The Globe's continuing investigation has revealed that more than 70 Canadian soldiers and vets who deployed to Afghanistan have killed themselves. Many had post-traumatic stress disorder (PTSD) and other mental-health issues related to their military work, along with personal problems such as relationship breakdowns and financial stress.

The federal government has long faced calls to track how many former soldiers are ending their lives and why. While suicides within the Canadian Armed Forces are monitored, the deaths of former soldiers have not been regularly tracked – a crucial gap in understanding how to better support vets and prevent further suicides.

The study, which linked National Defence personnel data with provincial and territorial death records submitted to Statistics Canada, marks only the second time that the government has counted veterans' suicides. The first time it released data was in 2011.

The most recent analysis doesn't break down how many were receiving disability benefits and services from Veterans Affairs, which is a significant shortcoming of the study, veterans' advocate Aaron Bedard said.

More analysis of the data is coming next year, said Faith McIntyre, director-general of policy and research at Veterans Affairs. The department has committed to annually releasing suicide reports. The next examination will focus on the military record of veterans lost to suicide, parsing whether they were in the army, navy or air force and whether they deployed overseas.

Researchers also plan to look at how much time passed between the soldiers' military release and their suicide, said Linda VanTil, an epidemiologist who is working on the study.

Last fall, The Globe published 31 profiles of Afghanistan war veterans lost to suicide. Five had been discharged from the military, and another three were scheduled for release.

Three of the five discharged soldiers – Sergeant Ron Anderson, Corporal Sean McClintock and Private Tyler Hulme – died within a year of leaving the Forces. Retired Pte. Hulme, 27, who had bipolar disorder, was facing a four-month wait for a civilian psychiatrist when he took his own life in April, 2014.

Dr. Heber said improving the support offered to military members who are being released is a priority for both the Forces and Veterans Affairs, which announced a joint suicide-prevention strategy in October.

The suicide rate among male veterans has increased in Canada by 10 per cent over the nearly four-decade period analyzed in the Veterans Affairs study. The rise is at stark odds with the 29-per-cent drop seen among the general male population.

For both male and female vets, the suicide risk was greater than their comparable Canadian populations – 1.4 times higher for men and 1.8 times for women. Of the 1,486 former soldiers who died by suicide, 1,421 were men and 65 were women.

"We know that the problem is grave because we see it firsthand. When you have PTSD, they fast-track you out. Suddenly, you are a pariah," veterans' advocate Mr. Bedard said. "Going from the pride of the nation to the bottom of the barrel, of course they're vulnerable."

Canada's suicide toll is similar to the numbers that the United States, Britain and Australia have uncovered among their military veterans. A study of American vets in 2010 showed that men were 1.5 times more likely to die by suicide than expected, while women faced a 5.9-times-higher risk.

Earlier this year, one Canadian veteran's struggle with severe PTSD and depression led to deadly consequences for his family.

Lionel Desmond, an infantry soldier in the Afghanistan war, was out of the army for just 18 months when he gunned down his wife, Shanna Desmond, their 10-year-old daughter, Aaliyah, and his mother, Brenda Desmond, before killing himself in their home in rural Nova Scotia in January. His family continues to call for an inquiry into the triple murder-suicide.

For two families of soldiers who died by suicide, the battle for recognition is over
November 8, 2017 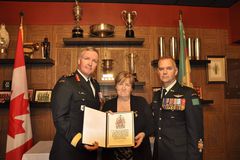 After 13 years, first Afghan-mission soldier to die by suicide will be honoured with a Memorial Cross​
July 26, 2017 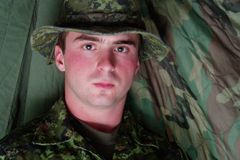 Nearly half of soldiers who killed themselves in 2016 were dealing with loved one’s suicide
November 29, 2017
Follow Renata D’Aliesio on Twitter @renatadaliesio
Report an error Editorial code of conduct
Due to technical reasons, we have temporarily removed commenting from our articles. We hope to have this fixed soon. Thank you for your patience. If you are looking to give feedback on our new site, please send it along to feedback@globeandmail.com. If you want to write a letter to the editor, please forward to letters@globeandmail.com.
Comments