Glacier died while venturing into some of the country's busiest shipping lanes in the Gulf of St. Lawrence after his favourite food: high-fat zooplankton called copepods that are like tiny Big Macs for the giant North Atlantic right whales.

Over the 33 years of his life, Glacier plunged and fluked his way up and down the Atlantic coast until, in June, he was struck by the hull of a ship. He died of blunt force trauma.

His school-bus-sized body was spotted floating in the Gulf on June 19 and towed to Prince Edward Island for necropsy.

Why are whales dying in the Gulf of St. Lawrence? What it means for fisheries and the future​​

Glacier (the name given to him by researchers) was one of 12 right whales found dead this summer in the Gulf of St. Lawrence. A report detailing the cause of death for six of these whales was released on Thursday, showing four died from vessel strikes and one from a long-term entanglement in fishing gear. The sixth whale was too decomposed for a conclusive result, but it was also believed to have been killed by a ship strike, said the report by the Marine Animal Response Society and veterinarians at the Atlantic Veterinary College and Canadian Wildlife Health Cooperative with support from Fisheries and Oceans Canada.

"Due to the very rapid rate of decomposition of these animals, it is imperative to ensure prompt identification, reporting, and response to such mortalities," the report said.

Conservationists in Canada and around the world are watching closely how Ottawa reacts to the deaths, which they say pose a serious threat to the survival of the species. This summer alone, the right whale deaths in Canadian waters represent 2.5 per cent of the critically endangered species, of which just 458 are left in the world.

The necropsies showed no evidence of biotoxins, infectious diseases or starvation in the whales. Five live whales were also documented entangled in snow crab fishing gear, the report said.

A joint statement from Fisheries and Oceans Minister Dominic LeBlanc and Minister of Transport Marc Garneau said the report will guide their next steps, but did not give details.

"We will continue to monitor the migration of the whales … in order to act accordingly, based on evidence," the statement said. "We are committed to doing what is necessary to help keep our right whales from harm."

Under Canada's Species at Risk Act, the federal government is required to prevent wildlife species from becoming extinct and help in the recovery of species that are endangered because of human activity.

Moira Brown, a right whale scientist with the Canadian Whale Institute and the New England Aquarium, said she is not surprised to learn the causes of death, as ship strikes and fishing gear entanglements have been the greatest threats to the species.

She said the federal government needs to start immediately to gather more data about the whales' location and look at other potential foraging areas. "Clearly, we have a really bad overlap with the fishing and shipping industry. … We need to move quickly to study this huge habitat as quickly as possible," Dr. Brown said.

Historically, right whales have fed in the Bay of Fundy and Roseway Basin off southern Nova Scotia in summer, but since at least 2010, they have been showing up in the Gulf of St. Lawrence, a semi-enclosed fishing and shipping area bordering the Atlantic provinces and Quebec.

Earlier this week, the Centre for Biological Diversity, Defenders of Wildlife, the Humane Society of the United States, Humane Society International and Whale and Dolphin Conservation sent a letter to Ottawa outlining actions they say it must take immediately to better protect the North Atlantic right whale. Addressed to Prime Minister Justin Trudeau, Mr. LeBlanc and Mr. Garneau, the letter called on the Canadian government to enact permanent mandatory speed limits in the Gulf of St. Lawrence, the Bay of Fundy and Roseway Basin when right whales are present, as is done seasonally in the United States. (Canada's mandatory speed limit in the Gulf is temporary, and speed reductions are voluntary in the Bay of Fundy and Roseway Basin.)

In August, Transport Canada set temporary speed limits of 10 knots for vessels of 20 metres or more in the Gulf of St. Lawrence, and on Thursday, the department said it may consider speed limits in other areas.

"We will be leaving that zone in place until we have advice from [Department of Fisheries and Oceans] science that, in fact, the whales have moved on, and we have prepared to be able to move the zone elsewhere in the ocean, if necessary, if indeed we get intelligence from DFO surveillance airplanes that the whales have moved to another location," said Jane Weldon, Transport Canada's director-general of marine safety and security.

Transport Canada has fined four vessels that did not respect the speed restriction, including a Canadian Coast Guard vessel.

This summer, aerial surveys identified 114 right whales in the Gulf – about one quarter of the world's population. They are expected to migrate to warmer U.S. waters by December.

DFO has been working for the past few years on an action plan that focuses on fishery interactions with right whales.

Glacier, meanwhile, will not be forgotten. His bones are being cured in manure to clean them of tissue and oil. In a few years, his skeleton will be mounted at DFO's future Atlantic science enterprise centre in Moncton. 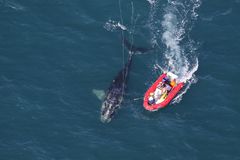 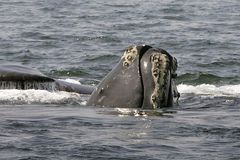