The interim leader of Ontario's Progressive Conservatives is launching an investigation into the legitimacy of the tens of thousands of new party memberships signed up during his predecessor's 2.5-year reign.

Vic Fedeli announced on Tuesday that he is bowing out of the leadership race to replace Patrick Brown. After five days on the job as interim leader following Mr. Brown's sudden resignation, Mr. Fedeli said he needs to devote all of his time to addressing a party structure that is in "much worse shape" than he realized. He has ordered a probe into the names and addresses of all 200,000 party members.

"I wouldn't have done that if I was completely satisfied," Mr. Fedeli told reporters at a news conference. "There is an overarching issue about these memberships that has caused me to ask for a complete analysis … right down to the IP addresses. I plan to root out the rot."

Mr. Fedeli's news about problems not just with possibly erroneous membership rolls but also the information-technology systems heightened the crisis gripping Ontario's Official Opposition and came a day before the party executive prepares to finalize rules for an upcoming leadership race.

Hartley Lefton, a Toronto lawyer and chair of the committee in charge of drafting the rules, said the party executive plans to meet on Wednesday, at which time the rules could be ratified. Once the executive approves them, the leadership race will officially begin. But party insiders said Mr. Fedeli's comments have cast fresh doubt on how the party could get ready for a leadership contest just four months before the provincial election. Leadership contenders would have 30 days to sign up new members. But the party needs to establish how many members it has before a leadership race begins.

Tory MPPs named Mr. Fedeli interim leader last Friday, after Mr. Brown stepped down following a CTV News report alleging sexual misconduct involving two young women. Mr. Brown has denied the allegations and remains a member of caucus. Under his leadership, party membership ranks swelled from 10,000 to 200,000, setting a new record. While the party has been known for signing up "instant Tories" at both the federal and provincial levels for decades, party insiders said Mr. Brown took the practice of signing up new members to a whole new level after he was elected leader in May, 2015.

Would-be nominees for the Progressive Conservatives and local party officials in as many as 14 ridings across Ontario have complained about voter fraud and broken rules at nominations. Allegations of ballot-stuffing were widespread during an ugly nomination race in the riding of Ottawa West-Nepean, currently held by Liberal Infrastructure Minister Bob Chiarelli.

The then-PC riding president, Emma McLennan, flagged concerns with the party executive last year about a May vote, questioning the legitimacy of 73 members listed as living at 25 Woodridge Cres., an apartment building, in spite of the fact that the names did not appear on the building's tenant directory. She also noted that 58 people had phone numbers with Toronto area codes. Ms. McLennan and a majority of the association executive resigned in protest in June.

One number on the riding association membership list belongs to Aval Arora in Toronto. When The Globe and Mail called the number on Tuesday, Ms. Arora said she's had that phone number for several years and has no connection to Ottawa or the Ontario PC Party.

Similarly, Balveer Singh of Toronto said he had no idea why his number appears on the membership list of a political riding association in Ottawa. "It's the first time I've heard of this," he said.

Mr. Fedeli said fixing problems with the party's systems will be a massive undertaking. "We have learned our party is in much worse shape than we knew," he said.

The party has been rocked by the departures of its two top officials in the run-up to the June 7 election. In addition to Mr. Brown, Rick Dykstra announced on Twitter on Sunday night that he was stepping "aside" as party president shortly before Maclean's published allegations that he sexually assaulted a young Conservative staffer in 2014 when he was a federal MP.

Mr. Dykstra did not address the allegations in his Twitter post, nor has he responded to requests for comment. His lawyers, Chris Murphy and John Phillips, said in a statement that Mr. Dykstra "categorically denies" the allegations reported by Maclean's.

However, Mr. Dykstra is staying on as a member of the executive, a decision made by interim party president Jag Badwal.

Mr. Fedeli called on Mr. Dykstra to "do the right thing" and step down from the executive. However, under the party's constitution, the leader – or interim leader – has no power to appoint or remove someone from the party executive. Mr. Dykstra led the charge to hold a leadership race before voters go to the polls on June 7, according to party insiders.

The executive overruled Tory MPPs who recommended to the executive that Mr. Fedeli take the party into the coming election as leader and wait until after the election to choose a permanent successor to Mr. Brown.

Richard Ciano, who served as party president prior to Mr. Dykstra, was informed by Mr. Badwal just before midnight on Monday that he was no longer on the executive, according to a party insider. In a tight vote on the question of when to hold a leadership race, Mr. Ciano was strongly in favour of waiting until after the election, according to insiders.

In an e-mail response, Mr. Badwal said the position of past president will be left vacant "until we complete the launch of the leadership process." 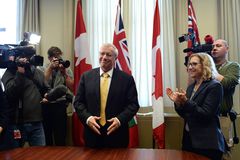 Follow Karen Howlett and Bill Curry on Twitter @kahowlett @curryb
Report an error Editorial code of conduct
Due to technical reasons, we have temporarily removed commenting from our articles. We hope to have this fixed soon. Thank you for your patience. If you are looking to give feedback on our new site, please send it along to feedback@globeandmail.com. If you want to write a letter to the editor, please forward to letters@globeandmail.com.
Comments are closed