Ontario provincial police say post mortems confirm that three people who were found dead in a Ryerson Township home last Friday, and the man suspected of killing them, all died from gunshot wounds.

The bodies of Ulla Theoret, 55, Paul Theoret, 28 and Raija Turunen, 88 were found at their rural home about 300 kilometres north of Toronto along with the suspected shooter, 58-year-old Mark Jones.

Police had earlier said they found a handgun and a long gun in the Theorets' house but have not yet indicated why they were killed.

Thomas Theoret, who lost his mother, brother and grandmother, said Monday that his loved ones were killed by a neighbour who had been "stalking" his parent.

Theoret said Jones and his mother had known each other for a while before their relationship soured.

Theoret said one of his other brothers, who lives in another Ontario community, eventually told Jones to leave the family alone.

"My mom didn't really date (Jones) but I think they were just friends for a couple months," he told The Canadian Press. "Then he started acting kind of strange and kind of stalking her."

The bodies of Theoret's family members and Jones were found by a friend who stopped by the home for a pre-arranged visit around 7:30 p.m. on Friday, police have said, noting that the deaths took place sometime between Wednesday evening and the time of the discovery. 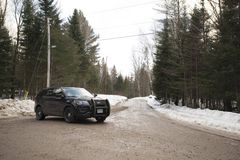 Police investigating deaths in Huntsville, Ont., as triple murder-suicide
February 25, 2018
Report an error
Due to technical reasons, we have temporarily removed commenting from our articles. We hope to have this fixed soon. Thank you for your patience. If you are looking to give feedback on our new site, please send it along to feedback@globeandmail.com. If you want to write a letter to the editor, please forward to letters@globeandmail.com.
Comments are closed