When his children were young, Victor Goldbloom would get home long after they had gone to bed and gently nudge them to see if they would wake. If they did, he would listen carefully to how their days had gone and then regale them with tales of his own. In a sense, it was a distillation of what drove him all his life in public and in private: to communicate as a pediatrician, as a politician, as a community leader, husband and father, and, as the title of his recently published autobiography Building Bridges indicates, as a conciliator.

"Dad could turn anything into a riveting story," said his daughter, Susan Restler. "Once, he woke me up and told me about a beef Wellington he'd had at the Beaver Club. It was as if I was there. My mouth watered at the description of the beef, the mushrooms and the puff pastry."

Jonathan Goldbloom, the younger of his two sons, recalls wondering why his father spent so much time on the phone with his patients, often repeating himself.

"It's because I want to make sure they understand my instructions," the father replied.

Ditto for his habit of making house calls, something few doctors ever do: He felt that if he could see how his patients' families lived, he'd have a better understanding of the situation.

"He was so respected, when the Concordia riot happened in 1969, three of his former patients called to ask him how they should tell their parents they were involved," his son said, referring to the student occupation of the computer lab in what was then known as Sir George Williams University in response to the institution's bungling of racism allegations against a professor.

"He was energetic, brilliant and a role model for so many," Mr. Goldbloom continued. "One [provincial] cabinet minister told me that when my father was in politics, whenever the minister travelled somewhere to make a speech, Dad had been there the week before."

Dr. Goldbloom, who died on Feb. 15 at the age of 92 after suffering a heart attack while enjoying dinner at a downtown Montreal steakhouse, lived that credo right up until the end. The city's mayor, Denis Coderre, tried to sum up the breadth of the man in a eulogy before hundreds of mourners with this quote, often attributed to Winston Churchill: "We make a living by what we get but we make a life by what we give."

Mr. Coderre went on to quote Dr. Goldbloom himself from a project he had contributed to, called "Ce que je crois," or "This, I believe," in which Dr. Goldbloom remarked that when he dies, he'd like God to tell him he'd done well and the world is a little bit better for his having been in it.

"And I am entirely certain that this is what the Almighty said to him on his arrival. Then, they probably went on to discuss baseball and the return of the Expos."

Victor Goldbloom was born in Montreal on July 31, 1923, the elder of Alton and Annie (née Ballon) Goldbloom's two sons. His parents valued both books and music, and they believed in making the world a better place by allowing themselves to be present in it and avail themselves of every opportunity to learn. For example, although there was little contact between the French and English-speaking communities at the time, his father, a pioneering pediatrician who was key to the development of Montreal Children's Hospital, spoke some French and was determined that his boys would become fluent. To that end, he hired a Parisian woman to visit their home on Crescent Street each week to converse with them; by the time they started at the neighbourhood public school, they already had a sense of the language's structure and nuance.

He completed his primary and secondary school years at Selwyn House and Lower Canada College, learning to turn the other cheek and perform even better when confronted with anti-Semitic sentiments. At McGill University, he earned a bachelor of science degree in 1944, a medical degree a year later and, in 1950, as he followed in his father's footsteps, a diploma in pediatrics.

Dr. Goldbloom, a bass-baritone who performed in concert occasionally, went to New York to do his residency because there he could combine medicine with his two other loves: baseball and opera. There, at a cocktail party in 1947, he met Sheila Barshay, a graduate of Mount Holyoke College who would become his wife. Intelligent, creative and working for the League of Women Voters, in some ways, she was the yin to his yang. Where he loved fine food, a smoky Scotch and good red wine, she fell asleep while nursing her first glass and couldn't cook a whit, preferring to compose dinner with frozen foods from the grocery store. And where he was skillful behind the wheel of a car, she was not.

But the couple were bound together by a shared passion for the issues of the day, a commitment to human rights and a total devotion to family. Married the following year, they moved back to Montreal where he began to practise and she learned to speak French, albeit with a heavy New York accent. When their youngest son was three, Dr. Goldbloom fully and proudly supported his wife as she returned to school to do a master's in social work at McGill University.

In 1966, Dr. Goldbloom was first elected to Quebec's National Assembly as the Liberal MNA for the riding of D'Arcy-McGee on Montreal's west side. Voters re-elected him three more times, until he stepped down in 1979. Along the way, he made history in double-barrelled fashion in 1970 when then-premier Robert Bourassa appointed him environment minister, for it marked the first time such a provincial portfolio existed and the first time a Jew had ever served in the Quebec cabinet.

As municipal affairs minister, he played a crucial role in getting the 1976 Montreal Summer Olympics ready on time after the province wrested control of the Games, with costs quickly spiralling out of control, from city hall. In the process, he faced down a formidable foe in then-mayor Jean Drapeau, but Jonathan Goldbloom said the two men remained friendly, if only because of his father's willingness to share the spotlight.

In 1979, after Claude Ryan became leader of the provincial Liberal Party, Dr. Goldbloom quit politics. In his memoir, he calls Mr. Ryan a "thoroughly vindictive" winner, uncommunicative and cold, and when a friend pointed out a newspaper advertisement in which the Canadian Council of Christians and Jews was looking for a new CEO, he applied and got the job.

For the next eight years, he used what he'd learned – as a child, as a medical student who had to meet more stringent standards for acceptance because he was Jewish, as a politician and as a family man – to improve a dialogue that was often fraught with misunderstanding. In the face of hate of any kind, he knew to act with grace, sensitivity and strength, and never forget that he was living in the present, where he could engage people and there was always a possibility for change. He believed that he was lucky to have been born in Montreal rather than Europe, where anti-Semitism in his day would have meant much worse than a barb or a quota.

In 1991, then prime-minister Brian Mulroney appointed Dr. Goldbloom as the country's commissioner of official languages. Even more than the council, it was a position that required skillful stickhandling; in provinces and territories where English was the predominant language, the Official Languages Act was thought to be coercive and unnecessary, while in Quebec it was thought to be in competition with Bill 101, the Charter of the French Language.

He'd been in the job for only six months when Don Getty, then-premier of Alberta, denounced what he called "forced bilingualism" in a speech to the Rotary Club of Edmonton. What to do? Three weeks later, Dr. Goldbloom was in Edmonton, standing before that very same Rotary Club and giving an impassioned speech about bilingualism as the glue that holds the country together.

"The Official Languages Act is not about compulsion," he said. "I look around the world today and I see people fighting each other and pulling apart from one another because of religious or linguistic or ethnic or cultural differences, and I thank God for Canada."

The crowd gave him a standing ovation.

In his own community, Dr. Goldbloom was often called upon for counsel, too. Denise Grossman, the president of Temple Emanu-El-Beth-Sholom in Westmount, said that when she got the news of his death, she called previous presidents to let them know.

"The first words out of everyone's mouth was, 'He was my mentor,'" she said. "Whenever he had a suggestion, he'd always preface it with, 'Excuse my chutzpah but …' And I would always reply, 'Your chutzpah is accepted any time.'"

His eldest son, Michael Goldbloom, noted that his father still did three Sudoku puzzles a day, planned to appear before a National Assembly committee hearing to voice his displeasure with a school board reform bill, and wanted to form a committee to improve Muslim-Jewish relations.

"We knew he could not live forever but he did seem to be ageless," he said. "We loved him and he loved us and he will always be with us." 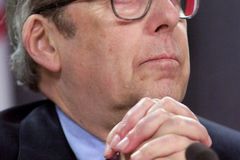