Pharmacies in Ontario are filling a growing number of prescriptions for opioids, but a new report from the Ontario Drug Policy Research Network suggests this may actually reflect safer prescribing practices.

The report, released on Tuesday, shows while one in seven people in Ontario were dispensed an opioid in 2016, that number has remained unchanged over the past several years. And although more prescriptions are being filled, the total volume of drugs being dispensed has declined, according to the report, titled Behind The Prescriptions: A Snapshot of Opioid Use Across All Ontarians. More than 4,800 mg MEQ (a unit of measurement that stands for "milligrams of morphine or equivalent") were dispensed in March, 2017, for every 100 individuals, down 18 per cent from 5,903 mg MEQ per 100 individuals in January, 2015.

"Even though we're seeing more prescriptions, this might actually be a positive finding in that it suggests similar numbers of people are getting opioids, but … they're getting smaller prescriptions at a time, which is actually probably a safer way of prescribing these drugs," said Tara Gomes, lead author of the report and a scientist at St. Michael's Hospital in Toronto.

Doctors' opioid-prescribing practices have recently come under increased scrutiny, as at least 2,458 apparent opioid-related overdose deaths were recorded across the country last year. In late 2016, Ontario's Ministry of Health and Long-Term Care introduced an opioid strategy to address the crisis of overdose and abuse, while the College of Physicians and Surgeons of Ontario launched investigations into doctors prescribing exceptionally high doses of opioids.

In 2016, nearly two million Ontarians were dispensed an opioid, the vast majority for the treatment of pain, Dr. Gomes and her team found. Some 317,890 were dispensed an opioid for cough suppression, and 57,509 for the treatment of addiction. Their report offers a more in-depth look at data released earlier this year in a report by Health Quality Ontario, which showed an increase of nearly half a million opioid prescriptions dispensed in the province in 2015-16, compared with 2013-14.

Both reports relied on data from the province's Narcotics Monitoring System, launched in 2012, which captures all prescriptions for opioids dispensed in the province.

The findings from Dr. Gomes and her team suggest doctors and dentists have become more prudent in prescribing the powerful painkillers, taking measures to lower the risk of addiction and misuse. Writing smaller prescriptions for shorter durations means patients are less likely to wind up with large quantities left over in their medicine cabinets, Dr. Gomes explained. It also ensures they have more contact with their pharmacists, and greater monitoring if they need their prescriptions refilled, she said.

Almost all opioid prescriptions for pain treatment in 2016 were for immediate-release opioids, such as codeine- or oxycodone-combination drugs, such as Percocet, the report found.

And more than 63 per cent of people given an opioid for pain were new users, which, the report said, likely reflects the common use of the drugs for short-term, acute pain, such as dental or postsurgery pain. On average, new users were given immediate-release opioid prescriptions for around five days, with about 30 tablets a prescription. Continuing users tended to be prescribed longer durations of around 14 days, and higher quantities of about 60 tablets a prescription.

Nearly 2.3 million prescriptions dispensed to continuing users were for long-acting opioids, including hydromorphone, oxycodone, morphine and fentanyl, which are typically used to treat chronic pain, the report found. Of these, close to 900,000, or 40 per cent, were for daily doses that exceeded the limit of 90 mg MEQ suggested in new national guidelines published in the Canadian Medical Association Journal in May.

"It's a bit of a good news, bad news story," Dr. Gomes said. "It still suggests a huge number of people are getting very high-dose opioid treatment, and we need to consider how we can continue to promote that decreasing over time in a safe manner."

Jason Busse, an associate professor at McMaster University's department of anesthesia who co-led the development of the new national guidelines, said the number of prescriptions that exceeded the recommended limit is not unexpected, since previous guidelines from 2010 suggested a limit of 200 mg MEQ.

"It's not surprising that current doses are probably more reflective of the earlier guideline," said Dr. Busse, who was not involved in the new report.

Dr. Busse said while doctors should approach patients receiving opioids of 90 mg MEQ or more daily for chronic, non-cancer pain to try to decrease their doses, there are risks, including withdrawal, that can be severe.

"We don't want to be in a position where some patients feel compelled to seek out opioids from non-prescription sources to address their symptoms," he said.

Opioids from illicit sources may play a role in the relatively high rates of opioid-related deaths in certain parts of the province, including Hamilton, Renfrew county and district and Simcoe Muskoka district health units. These areas had low rates of opioid prescriptions for pain and addiction, according to the report, which showed regional variations in prescription patterns. The Thunder Bay district health unit had the highest percentage of residents dispensed opioids for the treatment of addiction, as well as the highest rate of opioid-related deaths. 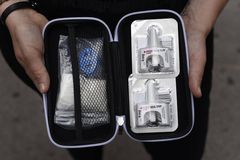