Cooke Aquaculture said in a written statement that it is "deeply disappointed" with Friday's vote to phase out ocean-based net-pen farms – where fish are raised in pens made of netting that allows water to flow freely between the containment area and marine environment – as leases come up for renewal over the next seven years.

The bill was passed in response to an incident last summer when high winds collapsed the pens of a fish farm owned by Cooke Aquaculture Pacific.

The incident let up to 263,000 Atlantic salmon loose into the Pacific Ocean, raising concerns the invasive fish could harm native Pacific salmon runs.

Canada's eastern waters have seen similar escapes, said Crabbe, which can have a devastating impact when the farmed fish breed with wild Atlantic salmon to create "hybrids" that are less capable of survival.

"Wherever the open net-pen industry is established on the east coast of North America, the wild salmon populations have plummeted," he said.

He said he doesn't think Atlantic Canada will follow Washington's lead in phasing out net-pen farming, but said provincial officials should take note of what happened in the state as they seek to expand the industry in the region.

Washington state officials have fined Cooke Aquaculture US$332,000 for the escape of the invasive salmon.

Crabbe said he thinks Atlantic Canada could see similar calls for accountability and stricter regulations regarding escapes and disease outbreaks.

"After the spill, (Cooke Aquaculture) ... characterized it primarily a business loss, and I think now what's happened is likely an incredible business loss for them," he said. "There are a lot of lessons we can learn, wherever the industry exists."

There are more than 100 Atlantic salmon farms in B.C. waters, compared with less than ten in Washington state.

Natural Resources Minister Doug Donaldson has said the province is working with First Nations, the aquaculture industry and the federal government as it reviews the fish-farm tenures, many of which come up for renewal this June.

The topic has sparked controversy in B.C., where some First Nations and environmentalists have occupied farms and hosted protests at ministers' offices. They say net-pen fish farms pose too great a risk to already-threatened native species, which are vulnerable to viruses and diseases.

The B.C. Salmon Farmers Association, meanwhile, maintains the province's industry is well managed. It also employs more than 6,000 people, it says, and constitutes the province's largest agricultural export – valued at $524-million in 2016.

Fisheries Minister Dominic LeBlanc said in a statement that the Canadian government is committed to regulating a responsible and sustainable aquaculture sector.

"We understand Canadians' concerns around aquaculture and are committed to science and evidence-based decision making," LeBlanc said.

He added that the government is convening a panel, announced Feb. 5, on the appropriate use and consideration of scientific evidence as it relates to aquaculture regulation.

He also pointed to a $24-million investment in the Aquaculture Sustainability Program, which aims to streamline regulation, improve regulatory management and increase scientific knowledge of the sector. 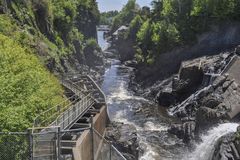 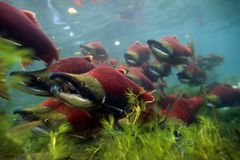 Genetically modified salmon approved for consumption in Canada
May 19, 2016 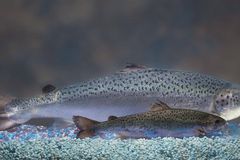