Elizabeth Tracey Mae Wettlaufer was charged Tuesday with eight counts of murder. That a nurse – a nurse! – could deliberately kill a patient, never mind eight frail elderly nursing-home residents who were under her care, is a stomach-churning thought. The revulsion is already palpable and it will grow as the details behind the spectacular headlines sink in.

Carer turned killer makes for a spectacular narrative, in a movie-of-the-week kind of way. Angel of Death makes for a powerful image.

But let's be careful here. The details released by police are vague as they are scant.

We should not jump to conclusions, nor assume that all nursing home residents are at risk. (They're not.)

We should also dispense quickly with the hackneyed notion of "mercy killing," that some self-appointed saviour is freeing people from their misery by knocking them off. That type of killer is delusional, and extremely rare.

Related: Alleged victims at Ontario nursing home all thought to have died of natural causes

Related: Former nurse stands accused of being one of Canada's most prolific serial killers

Real life rarely plays out like an episode of Criminal Minds, where mass murderers are foiled and justice served with razor-like efficiency.

History tells us that police investigations and prosecutions can go terribly wrong, and that what goes on in health-care facilities is not always as nefarious as it may seem.

The case of Susan Nelles is a haunting example.

On March 25, 1981, the 24-year-old cardiac nurse was charged with the murder of a three-month-old baby who died of an overdose of the drug digoxin, which is used to treat congestive heart failure.

Ms. Nelles would soon be charged with three other murders and, after a case that gripped the nation, she was discharged in May, 1982.

An exhaustive review eventually revealed 36 suspicious baby deaths at the Hospital for Sick Children, which sparked an inquiry headed by Justice Samuel Grange.

He concluded that Ms. Nelles should never have been charged, but blamed neither police nor the Crown, whom he deemed to have acted in good faith. The inquiry ultimately determined that eight children had been murdered but identified no murderer.

To this day, the baby deaths remain a tragic whodunit.

But, over time, the most commonly accepted theory has come to be that there were no murders. Rather, a chemical, MBT, that was used in the rubber seals of syringes and IV lines likely triggered fatal anaphylaxis in the very sick children, and digoxin spread in their bodies postmortem, giving the false impression of overdose.

So what does this have to do with the case of Ms. Wettlaufer? It reminds us that damning evidence may not always be what it seems.

That eight patients, aged 75 to 96, would die over a seven-year period while being cared for by the same nurse is not in the least bit unusual. The mortality rate for long-term nursing home residents is close to 100 per cent.

Seniors, and institutionalized seniors in particular, get a lot of drugs. Drug interactions and drug-related medical errors are commonplace.

Giving people a prescribed drug before they die is not the same thing as deliberately setting out to kill them in a premeditated fashion. And, again, it needs to be stressed that we don't yet know the details of what Ms. Wettlaufer is alleged to have done.

What we do know is that everyone – even someone who has had alcohol problems, someone who quit their job the day after suspicions were reported to police and whatever other dirt will be dredged up in the weeks to come – is entitled to the presumption of innocence.

While the Crown's case proceeds at the snail-like pace at which the justice system operates in Canada, we must resist the temptation to fill the void with speculation.

Former nurse stands accused of being one of Canada’s most prolific serial killers
October 25, 2016
Alleged victims at Ontario nursing home all thought to have died of natural causes
October 25, 2016 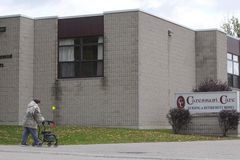 A history of nurses charged with killing patients
October 25, 2016
Follow André Picard on Twitter @picardonhealth
Report an error Editorial code of conduct
Due to technical reasons, we have temporarily removed commenting from our articles. We hope to have this fixed soon. Thank you for your patience. If you are looking to give feedback on our new site, please send it along to feedback@globeandmail.com. If you want to write a letter to the editor, please forward to letters@globeandmail.com.
Comments are closed