It had been snowing in Nepal's upper Manang district when two groups of Canadians had to decide on Tuesday whether to proceed with their treks in the narrow valleys north of the Annapurna range.

They decided to go ahead, and later that day, a torrent of rocks and snow swept away four of them, three from Quebec and one from Vancouver.

They were among as many as 27 people missing or killed in blizzards and avalanches around the Annapurna range this week. Fall is Nepal's high season for trekking, but heavy rain and snow have lashed the region after tropical Cyclone Hudhud struck the Indian subcontinent.

There are conflicting views about why the Canadians ventured onto the trail. A Kathmandu tour operator whose guide led four of the Canadians said his group was reluctant to move forward, but were swayed by six other Canadians booked by a Montreal travel agency.

"My guide said, 'Maybe this is dangerous. Better not go.' But they said, 'Oh, we can go.' And my clients followed them," said Harka Gurung, team leader at the Kathmandu outfitter Nepal Hidden Treks.

The other group was made up of six Quebeckers who booked with the Montreal outfitter, Terra Ultima. The group's tour leader was an experienced outdoorswoman, Sylvie Marois, and once in Nepal, they had a local guide, Kusang Sherpa, co-owner of Panorama Himalaya Trekking. 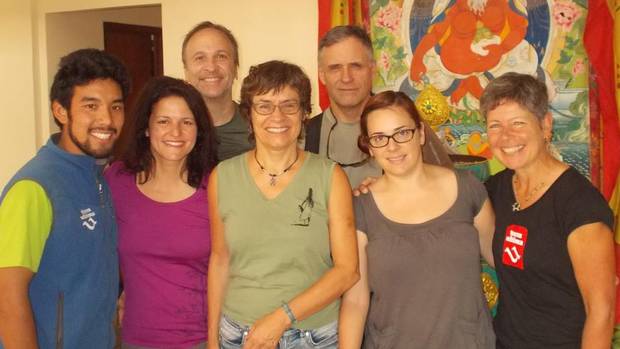 The Quebec trekkers and their Nepalese guide, in a photo posted on Facebook by Panorama Himalaya Trekking. At the left are Kusang Sherpa and Sonia Lévêque. On the right are Geneviève Adam and Sylvie Marois, who are now missing and presumed dead.

Ms. Marois, who is one of the people missing after the accident, was an accredited avalanche-safety instructor who trained others on avalanche risks, so she would never have led her group out in Nepal had there been a danger, said a friend and colleague, Renée-Claude Bastien, head of the Quebec association of adventure-tourism guides. Ms. Bastien led the same tour in Nepal for Terra Ultima a year ago. The area is usually dry and snow-free at this time of year, and safe for trekkers.

"I have full confidence in Sylvie's judgment," Ms. Bastien said. "She always knew what was going on around her, and always had people's safety in mind. She was just in the wrong place at the wrong time."

In an interview from Kathmandu, Mr. Gurung said it snowed all night before the two groups entered the Nar-Phu valleys, a new trekking destination north of the traditional Annapurna circuit.

A woman who was in the Terra Ultima group said the avalanche hit with a mix of rocks and snow clumps the size of basketballs.

Sonia Lévêque told Radio-Canada the trekkers were on a narrow trail at about 4,000-metre altitude, and had seen and heard smaller avalanches.

"We were looking out for avalanches, but this one really took us by surprise," Ms. Lévêque said.

She ended up buried to the waist in wet, heavy snow. She and her spouse dug themselves out. "We fought for our lives. We were lucky," she said.

Those missing include the 55-year-old Ms. Marois and two other members of the Terra Ultima group, a 59-year-old woman from a Montreal suburb, and Geneviève Adam, a 33-year-old nurse from Quebec City.

The fourth victim, hiking with Nepal Hidden, was Jan Rooks, 55, a nurse at the B.C. Children's Hospital in Vancouver. 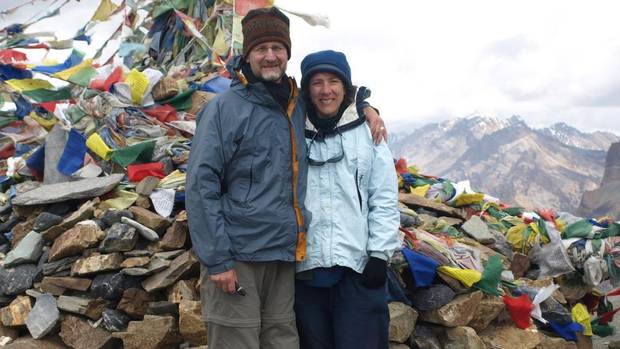 Vancouver nurse Jan Rooks, with her husband, Grant Tomlinson, in a photo they posted online following their previous trip in the Himalayas, in 2008.

Ms. Marois, Ms. Adam and Ms. Rooks were all well-travelled mountain-hiking enthusiasts. News about Ms. Marois has shocked Quebec's tight-knit world of adventure tourism. She was an award-winning, highly respected expert in outdoors tourism and a mentor to countless people, Ms. Bastien said.

Ms. Adam had scaled Mount Kilimanjaro in Tanzania last year. Ms. Rooks and her husband, Grant Tomlinson, had trekked in the Ladakh portion of the Himalayas in 2008. "It is an immense loss for our family," her family said in a statement that described Ms. Rooks as also "an accomplished pianist and keen environmentalist."

Ms. Lévêque said survivors had little success finding their missing companions because up to 20 metres of snow was piled up at the bottom of the avalanche.

Cold and wet, they walked for about an hour to shelter in a cabin.

Rescuers have recovered 10 bodies from the Phu area, the Trekking Agencies' Association of Nepal said.