Doctors typically assess a patient's ability to recover from a heart attack by weighing a variety of factors, among them being whether the patient is a smoker, has a healthy diet, and is physically receptive to medications or surgery.

But they might also want to consider how much money the patient makes and how many years he or she spent in school. And that summer cottage on the lake? Note that, too.

New research shows that poor Canadians are twice as likely to die as affluent Canadians 10 years after suffering a heart attack despite having similar access to quality medical care. The striking difference in mortality hinges on the capacity of wealthier patients to exercise.

That poverty correlates with higher rates of disease and mortality has been known for decades. More and more, however, scientists focusing on the relationship between socioeconomic status and health are arriving at the same conclusion: Wealth equals health regardless of access to care.

Risk for any number of ailments, from mental illness to infant mortality to asthma, falls with every rung on the socioeconomic ladder a person climbs.

"Disease is driven in large part by what is happening to you, both physiologically and socially and behaviourally," said Nancy Adler, director of the Center for Health and Community at the University of California at San Francisco, who has studied socioeconomics as a predictor of health extensively. "Health care can't move that."

The heart study: How income made a difference

Researchers at the Institute for Clinical Evaluative Sciences tracked 1,368 Ontario residents who had suffered a myocardial infarction (medical jargon for a heart attack) between 1999 and 2003 and who had survived at least one year.

The same pattern held true, although to a slightly lesser extent, when researchers analyzed mortality based on five categories of educational status, from incomplete high school to university degree.

"While the magnitude of association between unadjusted education and mortality was smaller than that for income, the relationships between education, functional recovery and post-[heart attack] survival were similar as for income," said the report, published Monday in the medical journal PLoS One.

Researchers found no single reason that less affluent patients exercised less, but rather pointed to a variety of factors. Socioeconomically disadvantaged people are generally less likely to make healthy lifestyle choices; they may be limited by other medical illnesses or disabilities; their jobs and other family commitments may not leave them time to work out, and they may not have the money to join a gym.

Another problem, noted the lead researcher, David Alter, in an interview is that exercise is still not prescribed routinely and programs are not in place to facilitate it.

For example, while all patients have access to angioplasty or bypass surgery after a heart attack, fewer than 30 per cent are admitted to cardiac rehabilitation programs after surgical interventions.

"We give lip service to the importance of exercise and physical activity, but it's still not integrated into care," Dr. Alter said.

That means patients are largely left to their own devices, which gives wealthier patients a distinct advantage. That is reflected in the mortality data.

About 70,000 people a year in Canada die of cardiovascular disease – including heart attacks, heart failure and stroke, according to the Public Health Agency of Canada.

That figure includes about 16,000 people who die of heart attacks. However, most of the 60,000 or so Canadians who have heart attacks each year survive. The new research suggests they would have better outcomes if they were physically active.

There are also an estimated 1.6 million Canadians living with cardiovascular disease.

Modern research on social determinants of health can be traced to what is known as the Whitehall study, which examined mortality rates over 10 years beginning in the late 1960s of men in the heavily stratified British civil service.

Researchers discovered a striking correlation between grade levels of civil service jobs and mortality. Workers at the higher end of the service hierarchy were likely to live longer, healthier lives than their counterparts on the lower end of the spectrum.

Lower-ranked men were found to engage in risky behaviours, such as smoking, have less leisure time and were more likely to be overweight. But the disparity from pay grade to pay grade held even when these factors were normalized.

Whitehall researchers theorized that prolonged exposure to stress – the everyday stresses that accompany a lifetime of living paycheque to paycheque – may have an adverse impact on health. Subsequent studies by researchers around the world have bolstered that theory.

"All the research indicates that once you know somebody's poor, it doesn't matter if they're overweight or physically active in terms of the predictability of getting coronary heart disease," said Dennis Raphael, a professor of health policy and management at York University in Toronto, who has written extensively on the effect of income and poverty on health, particularly diabetes.

Canadian studies on the social determinant of health abound.

In 2008, the Canadian Institute for Health Information released a report that found people in lower socioeconomic groups in 15 urban areas across Canada were far more likely to be hospitalized for mental illness and childhood asthma.

Regina and Winnipeg had the most profound differences in hospitalization rates, while Ottawa and Toronto had the least. For example, poor people in Regina were 4.5 times more likely to be hospitalized for mental illness than people in the highest socioeconomic group. In Ottawa, the hospitalization rate between those classes was twice as high for the poor.

"At every stage of life, health is determined by complex interactions between social and economic factors, the physical environment and behaviour," the report said. "They do not exist in isolation from each other. It is the combined influence of the determinants of health that determine health status."

Many heart attack victims are able to resume many of the activities they enjoyed prior to their heart attack. The Heart and Stroke Foundation advises people in the early stages of recovery talk to their doctors about when they can safely resume activities such as driving, returning to work and air travel.

The Heart and Stroke Foundation and the American Heart Association both offer tips on heart attack treatment and recovering on their websites. 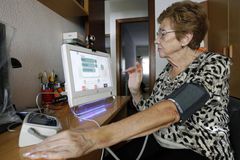