The bigger boats no longer show up at the marinas. Where people once were able to scoop pails of lake water, there is now just wild grass and pebbles. Gentle waves used to lap on cottage docks, but they have been replaced by decaying weeds that wash up on the receding shore.

Despite a rainy summer, there is still much hand-wringing around Georgian Bay as locals and cottagers alike are again worrying about the future after water levels in Lake Huron and Lake Michigan, which have remained below average for the past 14 years, hit a record low in January.

This is an iconic place, associated with the works of Tom Thomson and the Group of Seven artists, who shaped a certain image of harsh, beautiful Canadian wilderness, with its rocky islands, twisted pine trees and windswept skies. The area became a favourite vacation spot for the country's elite, with multimillion-dollar cottages and spectacular views.

Today, the archetypal image would be one of extended wooden docks stretching over bare rocks, sands and weeds. The talk is of costly dredging, boats striking emerging rocks and dying businesses. This prime cottage country is a troubled place. 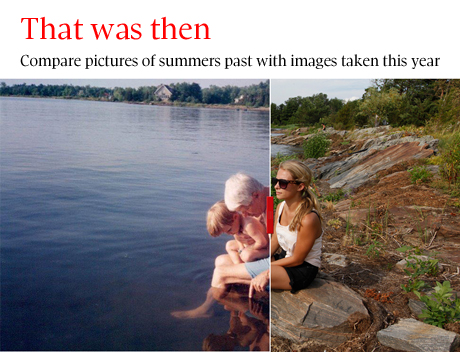 In Honey Harbour, a tiny community on the fractal-like southeastern shores of Georgian Bay, 21-year-old Lauren Patchett has worked at the Bee Hive Gifts & Antiques shop every summer since she was 14. She remembers how the water levels began to drop dramatically over the past decade. One year, she recalls, "we came up and it was starkly different. We had a whole new beach."

At her family cottage in nearby Waubaushene, her grandfather Richard McPhail would hold her on his lap when she was a toddler as he sat on a submerged rock, the water reaching his knees. Today, the water has pulled away and that same rock sits bare, surrounded by rotting weeds that have to raked away to remove their rank smell.

The situation has been a headache for many cottage owners, who lost access to their waterfront, had to relocate their docks, and lost property value, says long-time resident Larry Simons. "Maybe the Great Lakes aren't an endless water supply," he says.

A five-minute drive to the south, at the Picnic Island Resort, a cottage and trailer-camping facility with a marine gas station and boat slip, owner Ken Aquino has seen a 35-per-cent drop in boat fuel sales.

"There's a lot less boat traffic. I think people are afraid because they don't know where the rocks are now. As the water drops, new rocks appear."

He recalls the days when a few boats would sail nearly every minute across the channel between his resort and Roberts Island. "It's pretty quiet now. It used to look like the 401. Now, it's empty."

The International Joint Commission, which is responsible for shared U.S. and Canadian water issues, says the decline can be blamed on many factors. In a 2009 study, it found that between 1963 and 2007, the water levels of Lake Michigan and Lake Huron dropped 23 centimetres relative to Lake Erie, though the shift varies depending on locations and seasons.

One cause for the change was what was done to the St. Clair River, which flows out of Lake Huron and has been dredged several times over the past century to open it for larger commercial vessels, increasing the flow of water out of Huron and Michigan. This lowered the overall water level in Michigan and Huron by an estimated seven to 14 centimetres, according to the commission.

Another factor was the glacial isostatic adjustment. With the disappearance of the weight of the glaciers that carved out the Great Lakes thousands of years ago, the Earth's crust has slowly rebounded and tilted the area, resulting in another drop of four or five centimetres.

But the primary cause has been changing climate patterns, the study said. Shorter winters and warmer summers meant more water evaporating from the lakes than was going back in through precipitation, taking nine to 17 centimetres out of the water levels.

Earlier this year, the IJC surprised people in the area by recommending that Canada and the United States consider building a new structure in the St. Clair River to raise water levels in Lake Huron and Michigan by as much as 25 centimetres. One of the many options: an inflatable "flap gate" that would cost up to $170-million and would slow the movement of water through part of the river. But even if governments decided to go ahead with an engineered structure, it would take at least 10 years for water levels to rise.

Back in Honey Harbour, Diane Ross-Langley, who has run the Village Marina with her husband for more than four decades, said the receding shore forced them to spend more than $200,000 this spring to fix the docking area and dredge around it.

Still, the shallower water has made life hard for boat owners. She says one first-time visitor damaged his boat's outdrive, came to her marina for repairs, then headed out and quickly struck another emerging hazard despite staying within the navigation markers.

There are now fewer vacationers and they show up later in the summer, she says. "Nobody came up until July 1. ... It was almost like a ghost town here."

Her husband, Philip Langley, quips that they should turn their business into a dealership for all-terrain vehicles. "Soon, it'll just be a bunch of little ponds out there."

Editor's note: This article originally incorrectly quoted Diane Ross-Langley saying it would cost $20,000 to fix the docking area. In fact, it will cost $200,000. In addition her husband's name is Philip Langley, not Larry Langley as previously published.