An anonymous anarchist blogger who claimed to have taken part in a vandalism rampage in Hamilton says frustration with gentrification in the city is the motive behind the group's violence.

In a blog post on Anarchistnews.org on Monday, the writer noted their "one regret from the evening" – in which about 30 masked vandals pelted rocks through the windows of cafés, boutiques and other "yuppie businesses" along Hamilton's Locke Street South on Saturday night – was that they hadn't hit the Starbucks. The coffee franchise was a few too many blocks out of the way, the blogger rued.

It was the most violent incident in an escalation of anti-gentrification acts in a city that is seeing rising housing prices and redevelopment in the downtown core. Last summer, a busload of developers from Toronto was sprayed by sour milk-filled water guns when they arrived for a "Try Hamilton" real estate tour.

A newly opened high-end restaurant on Barton Street East had its front window smashed. A west-end real estate office had its locks glued shut. A renovated co-working space had "Hamilton is Not Your Blank Canvas" spray-painted on its wall.

No arrests have been made in this case, but police said Tuesday that they have linked this latest vandalism rampage to an anarchist book fair that took place at a local high school over the weekend.

The Tower, an anarchist "social space" in downtown Hamilton and one of the organizers behind the book fair, has remained quiet on the issue. On Monday, the Tower's own front window was broken in a seeming show of retaliation. A sheet of plywood was put up with a message scrawled across it: "We are not the least afraid of RUINS for we carry a new world here in our hearts."

The violence started after dark Saturday, and left close to $100,000 in damages.

Rebecca Tomasic, owner of Bitten Cupcakes, was just leaving her Locke Street shop around 10 p.m. when she noticed the group marching toward her – 30 or so faces hidden behind masks and balaclavas. They held up a banner as they headed down the middle of the road: "We Are the Ungovernables."

Ms. Tomasic darted to her car across the street and locked the doors, watching in shock as a big rock was picked up and hurled toward her small business, smashing the window. A handful of people banged at the remaining glass storefront with what appeared to be hammers before that too shattered.

"I watched it all unfold, sitting in my car," she said. "Seeing that banner, and the word 'ungovernable,' it's such a bizarre word … you don't know where the line is."

Police – outnumbered by the group armed with rocks – had retreated and called for backup, watching from a distance as the group made its way down the street. By the time backup supports arrived, the group had scattered.

It was an organized effort, police said. The group had cars waiting – and those who took off on foot shed layers of clothing as they fled, in the style of "black bloc" protesters.

In the blog post Monday, the unidentified anarchist expressed frustration with the celebration that has accompanied the city's revival.

"Locke St was downtown's first gentrified street, its 'success story' as Mayor Fred [Eisenberger] might say, the surrounding neighbourhoods the first to see the rent hikes that have since come to dominate so many of our lives," the post read. "Turning the tables and finally counterattacking Saturday night helped me to shake off some of the fear and frustration that build up when you're trapped in a hopeless situation."

The events have been condemned by politicians and community activists alike. There is a legitimate conversation to be had here, they acknowledge – but not with masks on.

Matt Thompson, a community developer with Hamilton's Social Planning and Research Council, says there have certainly been "cascading effects" of gentrification, not just in Hamilton, but across the Greater Toronto and Niagara regions.

"The statement that I read speaks about rich people and parasites making money through investments," he said. "Well, these small businesses on Locke Street … I mean they are, in most cases I suspect, really hard working. And they're not rich."

Reuben and Heidi Vanderkwaak, whose doughnut shop was targeted, learned of the vandalism through a flurry of late-night texts and calls from friends.

When they arrived at the store, around 11:30 p.m., they were crushed – they had just opened the shop in January.

"In our minds, there's no reason for us to be a target for anyone. We try to be equitable in everything that we do," Mr. Vanderkwaak said Tuesday.

He has seen posts chiding doughnut shops as "the poster child of gentrification," but he says that's not fair: "Just because we sell this product doesn't mean that is who we are, or our approach to anything."

They say they pay their 25 employees a living wage and are in the process of researching benefit plans. They buy local ingredients and try to give back to the community. As small business owners, they thought they were doing it right.

Mr. Vanderkwaak said he has read the anarchist's blog post, and is conscious of the issues that come with gentrification – but he is struggling to make sense of the blog poster's rationale.

"Doing what they did doesn't do anything; it doesn't solve anybody's problems. It doesn't work toward any positive change. It just drives the problems further in, and it drives people apart."

While he condemned the violence – "as any reasonable person would" – Prof. Harris acknowledged that there is some legitimacy to the root concerns raised. The issue with gentrification is not so much displacement, he said, as market exclusion – neighbourhoods becoming inaccessible to people who might have dreamed of living there.

Gentrification has been happening for close to half a century, but these sorts of "militant" responses are a new phenomenon, he said.

"I think that says much more about our times than it does specifically about gentrification," he said. "It's an act more of desperation and anger, I think, than anything I'd imagine could lead in any useful direction." 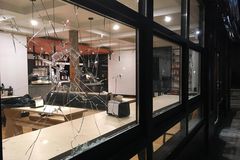 Masked mob of 'ungovernables' in Hamilton, Ont. cause $100,000 in damages
March 4, 2018
Follow Molly Hayes on Twitter @MollyHayes
Report an error Editorial code of conduct
Due to technical reasons, we have temporarily removed commenting from our articles. We hope to have this fixed soon. Thank you for your patience. If you are looking to give feedback on our new site, please send it along to feedback@globeandmail.com. If you want to write a letter to the editor, please forward to letters@globeandmail.com.
Comments are closed