As Justin Trudeau's Liberal government tables its long-awaited marijuana legislation, Canada's doctors have a message about pot: Just because it will eventually be legal, doesn't mean it's safe.

"We're saying, 'please keep the public-health focus front of mind as this legislation is unrolled,' " said Gail Beck, the clinical director of youth psychiatry at The Royal, a psychiatric hospital in Ottawa. "Lots of people think this is harmless."

The medical profession in this country has long had misgivings about medicinal marijuana – namely, that there is not enough solid evidence of pot's efficacy in treating chronic pain and other ailments to warrant a doctor's endorsement. But with the advent of legal recreational marijuana, doctors have a different set of worries.

One top-of-mind concern: The potential for addiction to marijuana, especially among teens and young adults. "We know that 1 in 7 teenagers who start using cannabis will develop cannabis-use disorder, which is significant," said Christina Grant, a professor of pediatrics at McMaster University in Hamilton.

Cannabis use crosses over into disorder territory when it begins to cause dysfunction in users' day-to-day lives, derailing their commitment to school or work and sowing conflict in their families, said Dr. Grant, the lead author of the Canadian Paediatric Society's position statement on marijuana, released last fall.

There is stronger evidence that heavy use of cannabis can lead to psychosis, especially among people who have a family history of mental illness, Dr. Beck said. However, the vast majority of the research involved people who use cannabis daily. The scientific literature is virtually silent on the mental-health effects of smoking pot now and then.

"We don't know the lower limit that's safe," Dr. Grant cautioned. "There's no evidence to say, yeah, use it once, use it twice and nothing will happen."

There is good evidence that teens who smoke pot frequently suffer long-lasting damage to their still immature brains, including problems with memory, attention and executive functioning. "For teenagers who use cannabis regularly, there's actually structural changes [visible] on MRI," Dr. Grant said. "They show that certain areas of the brain are smaller, there's thinning of a part of the brain called the cortex, which is very important in terms of thinking and planning and organizing."

The adult brain appears capable of recovering from chronic pot use in a few weeks. "That's not what happens in young people," Dr. Beck said. Citing concerns about the adolescent brain, the CMA, which represents the country's physicians, last year urged the federal government to ban the sale of marijuana to people under the age of 21 and to restrict the amount and potency of the drug available to those younger than 25.

Most of the health concerns associated with cannabis apply to heavy users. But occasional tokers can wreak havoc if they get behind the wheel while high. "Cannabis impairs your ability to safely drive a vehicle," said Amy Porath, the director of research and policy for the Canadian Centre on Substance Abuse (CCSA.) "It impairs your reaction time. It impairs your ability to multitask and pay attention." Police across the country are currently piloting a roadside saliva test to see if it adequately detects cannabis-impaired drivers.

Your lungs on pot

"Whether it's tobacco or cannabis," Dr. Porath said, "there are concerns with smoking anything." Smoking pot can cause coughing, wheezing, sore throat and tightness in the chest. It can also aggravate asthma. Although marijuana smoke contains many of the same cancer-causing chemicals as cigarette smoke, the evidence that pot-smoking causes lung cancer is mixed, according to a review of the evidence by the CCSA. The same is true of cannabis smoke and chronic obstructive pulmonary disease or COPD, an umbrella term that includes chronic bronchitis and emphysema. Recent studies have suggested "no causal relationship" to COPD in cases where patients smoked low-to-moderate amounts of pot, the CCSA report said, but more research is needed among heavy smokers of the drug. 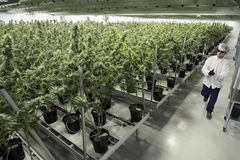