The antimalarial drug mefloquine has come under renewed fire from former Canadian soldiers who say the medication left them with anxiety, paranoia, depression, dizziness and permanent psychiatric problems. The Canadian military is reassessing its use of mefloquine, which is now the antimalarial of choice for fewer than 5 per cent of Canadian soldiers deployed to parts of the world where malaria is prevalent. Outside the military, mefloquine is still an option for everyday travellers who need to protect themselves from malaria. Let's take a closer look at the controversial drug.

Mefloquine is an antimalarial medication that goes by the brand name Lariam. The brand-name version is no longer sold in Canada, but a generic version, marketed by AA Pharma Inc., is available here. Travellers take mefloquine and other antimalarials to protect themselves from falling ill if bitten by a mosquito that carries the malaria parasite.

There are between 400 and 600 cases of malaria diagnosed in travellers returning to Canada annually. Between 10 and 20 of those are serious enough to require advanced critical care.

How often must travellers take mefloquine?

Of the three antimalarials regularly used by Canadian travellers, mefloquine is the only one that can be taken weekly. The others have to be swallowed daily. The Public Health Agency of Canada (PHAC) has an expert committee which writes guidelines on tropical diseases and travel for doctors across the country. The group's subcommittee on malaria recommends three options for prevention: mefloquine; atovaquone-proguanil, better known by the brand name Malarone; and doxycycline, an antibiotic. (Chloroquine, another option that can be taken weekly, is the first-line choice for Haiti, the Dominican Republic, Central America north of the Panama Canal and a handful of other places. But most of the areas where malaria is endemic are now chloroquine-resistant, meaning the drug does not provide protection there.)

To best shield themselves from malaria, travellers should start taking mefloquine at least one week – preferably two or three – before departure and then once a week for four weeks after their return. Malarone can be started a day before leaving and has to be taken daily for seven days after a traveller returns. Doxycycline should be started one day before departure and taken daily for four weeks after leaving the malaria zone. All three pills must, of course, be taken while in a malaria zone.

What is the cost of mefloquine?

The price varies, but an online pharmacy search turned up prices as low as $3.25 a tablet and as high as $12 a tablet. Because mefloquine only has to be taken once a week, that works out to as little as 46 cents a day, although the average cost is closer to $1 a day.

Malarone or its generic equivalents are the most expensive option, costing between $5 and $10 a pill, or day. Doxycycline, which like Malarone has to be taken daily, is the cheapest at between 50 cents and $1 a pill.

What are the advantages of mefloquine?

"The once-weekly dosing is quite attractive to some people," said Andrea Boggild, clinical director of the tropical-disease unit at Toronto General Hospital. "Some people will say, 'You know what? I just cannot manage to take a pill every day.' " Mefloquine is relatively inexpensive, too, which is especially important for travellers without extended health insurance who plan to spend months in a malaria zone.

Dr. Boggild, who is also a member of PHAC's Committee to Advise on Tropical Medicine and Travel and its malaria subcommittee, said that for travellers with no history of mental illness, mefloquine can be a convenient and affordable choice.

What are the disadvantages of mefloquine?

There can be severe neurological and psychiatric side effects with mefloquine, especially for people with any history of mental illness. In 2013, the U.S. Food and Drug Administration added a black-box warning – its most serious kind – to mefloquine's label. Health Canada in August quietly updated its detailed description of the drug to make some of its potential dangers more clear. "The major drawback [of mefloquine] is intolerability," Dr. Boggild said. "The issues are as minor as unpleasant dreams to issues as major as severe neuropsychiatric adverse events in the range of 1 in 10,000 healthy people."

Hard figures were not immediately available, but travel doctors and tropical-disease experts say that Malarone and its generic equivalents are now significantly more popular than mefloquine. "I rarely use [mefloquine] for anybody who's never taken it before," said Mark Wise, a Toronto family doctor who also practises travel medicine. Malarone, Dr. Wise said, has fewer side effects and has not been subject to the same bad press as mefloquine. "Most travel clinics probably aren't using mefloquine for first choice. They should certainly be avoiding it in a certain population. There are safer, well-tolerated, effective options." Dr. Boggild, who only sees ill returning travellers, said she "rarely" meets patients who were on mefloquine. 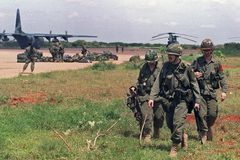 Top military physician skeptical about toxicity of malaria medication
November 18, 2016
Judge urges Ottawa to look into mefloquine
November 17, 2016
Follow Kelly Grant on Twitter @kellygrant1
Report an error Editorial code of conduct
Due to technical reasons, we have temporarily removed commenting from our articles. We hope to have this fixed soon. Thank you for your patience. If you are looking to give feedback on our new site, please send it along to feedback@globeandmail.com. If you want to write a letter to the editor, please forward to letters@globeandmail.com.
Comments