As Canada's premiers gather in St. John's for three days of meetings at the Council of the Federation, one item will tower over all else: the Canadian Energy Strategy.

A master plan for the future of oil, gas and electricity in this country, it is one of the most important pieces of policy provincial and territorial leaders have ever crafted.

Alberta and other oil-producing provinces are counting on the strategy to help them build more pipelines, get their resources to market and expand overseas exports. Ontario and Quebec, for their part, have pushed for the strategy to contain an agreement between all provinces and territories to battle climate change.

According to a confidential draft obtained this week by The Globe and Mail, the Canadian Energy Strategy commits the provinces and territories to help get oil pipelines built – but contains little concrete action on climate change.

The strongest environmental commitment – a promise for all provinces and territories to set absolute targets for cutting greenhouse gases – is marked as a sticking point that could be scrapped from the final strategy after debate this week.

Here's everything you need to know:

What is the Canadian Energy Strategy? Why is it happening?

Former Alberta premier Alison Redford kick-started the strategy in 2012 to get the rest of the country to help her province move more oil-sands bitumen and crude to market.

Alberta's problem was that it didn't have enough transportation capacity for all the oil it could be producing. Various companies proposed new pipelines – Energy East, an expansion of Kinder Morgan's Trans Mountain, Keystone XL and Northern Gateway – to carry Alberta's oil to refineries and ports, from which it could be exported overseas.

But environmental groups and First Nations opposed these pipelines, and some have become tied up in regulatory reviews.

Ms. Redford wanted the rest of the country's premiers to help these pipelines get built. Such a strategy could also benefit Saskatchewan and Newfoundland and Labrador, the country's other two oil-producing provinces; New Brunswick, which wants more oil to feed into a refinery in Saint John, also stands to gain.

During the three years it has taken to draft the strategy, Ms. Redford resigned, and several other provincial premierships have changed hands. But the central idea of the strategy is the same.

That sounds great for Alberta. Why are Ontario and Quebec so keen on this?

Kathleen Wynne and Philippe Couillard have become interested in the Canadian Energy Strategy, particularly over the last year, because they think it would be a good way to get a national agreement on climate change.

So far, the provinces have all acted independently: Ontario closed its coal-fired power plants, Quebec implemented a cap-and-trade system on carbon emissions and British Columbia has brought in a carbon tax.

But there is no overarching plan to which all provinces and territories agree. This has led to wildly different results in the fight against climate change: Ontario, Quebec and British Columbia have all managed to cut greenhouse-gas emissions, but Alberta and Saskatchewan have seen major increases.

So, the quid pro quo in the strategy would see Ontario and Quebec agree to help Alberta and other oil-producing provinces get more oil to market; in exchange, everyone would agree to concrete, co-ordinated action to fight climate change.

Most importantly, the Canadian Energy Strategy would figure out how to square the oil sands with the need to achieve absolute cuts to the country's greenhouse-gas emissions.

So how did all that turn out?

In a nutshell: the draft strategy would make Ms. Redford proud. Alberta got everything it wanted on the oil side; Ontario and Quebec didn't get much on the climate side.

Section 7 recognizes the need to build more pipelines and other energy infrastructure:

"As energy production expands to meet growing domestic and international energy demands, our country must have the necessary pipelines, electricity systems and other energy infrastructure in place to move energy products to the people that need them," it reads.

Section 8 commits the premiers to speed up regulatory decisions so companies proposing pipelines or other oil and gas projects can get a yea or nay more quickly. The provinces and territories commit to "reducing overlaps and duplication" and to develop common protocols between their various regulatory regimes.

And section 9 commits the country to "promote market diversification" by exporting more oil and gas overseas.

"It is projected that over the next 20 years, levels of energy production across Canada will increasingly outpace domestic energy needs, resulting in growing amounts of energy available for export," the section says. "The international energy market is very competitive, and in the race for new markets, Canada's global competitors are not standing still. It is important that we take timely action to explore and seize international export opportunities."

This section of the strategy also suggests the country should create "value-added energy products," such as "chemicals and refined fuels."

The climate-change provisions, by contrast, are pretty vague. Section 2 of the strategy commits the premiers to "transition to a lower carbon economy" but there is little specific agreement on exactly what provinces and territories will do to make this happen.

What is the most important climate promise in the strategy?

The only major, firm climate-change commitment in the draft strategy seen by The Globe is a pledge by all provinces and territories to "pursue absolute GHG emissions reductions."

This is significant because many provinces – including Alberta – do not currently set absolute emission-reduction targets (Alberta's GHG emissions have gone up 53 per cent since 1990.) If adopted, this section of the strategy would compel everyone to cut back on greenhouse gases.

But this section of the strategy is underlined in red, and the word "absolute" is further enclosed in red square brackets. This means the section is still up for debate and could be scrapped.

Sources familiar with the strategy say this is expected to be thrashed out at the premiers' conference.

Whether the premiers keep this section intact, or water it down (or cut it out entirely) will be a pivotal test of whether the strategy tackles climate change.

How does Alberta's new government affect all of this?

That's the one wild card. Since Rachel Notley's NDP ousted the Progressive Conservatives in the May election, she has promised stronger action on climate change.

Ms. Notley has appointed an expert panel to make recommendations on what the government should do on the global-warming front. The panel does not report back until later this year, but it's possible Alberta's new government might signal its willingness to take stronger action on climate change than its Tory predecessors by agreeing to something significant in the Canadian Energy Strategy.

That said, Ms. Notley's government has largely adopted the same language on the strategy as the Tories used – the need to get pipelines built and more oil-sands crude to market.

We'll have to wait and see how she plays her cards this week.

The premier's conference began Wednesday with a meeting with First Nations, followed by an informal reception and dinner between the provincial leaders. On Thursday and Friday, they hunker down for intensive negotiations.

The plan is for the strategy to be finalized and released before the end of the week. That could, of course, change if there are serious disagreements and some premiers opt not to sign on. 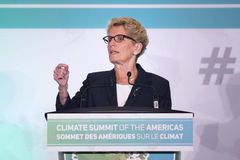