More than a million Canadians served full-time in the armed services during the Second World War. Of those, 45,000 were killed and another 54,000 were wounded. As we remember all those who served, The Globe and Mail's Dave McGinn spoke to five Canadians about how they joined the war effort seven decades ago.

'It was such a different Canada,' says Anthony Wilson-Smith, president of Historica Canada. 'Very few people had the money to go on overseas trips, nobody could just take an airplane and go somewhere … and Canada was a much more rural society than it is now.'

Four of the five veterans featured here are part of Historica Canada's Memory Project, an education program launched in 2001. All of their stories shed light on their life-altering events. 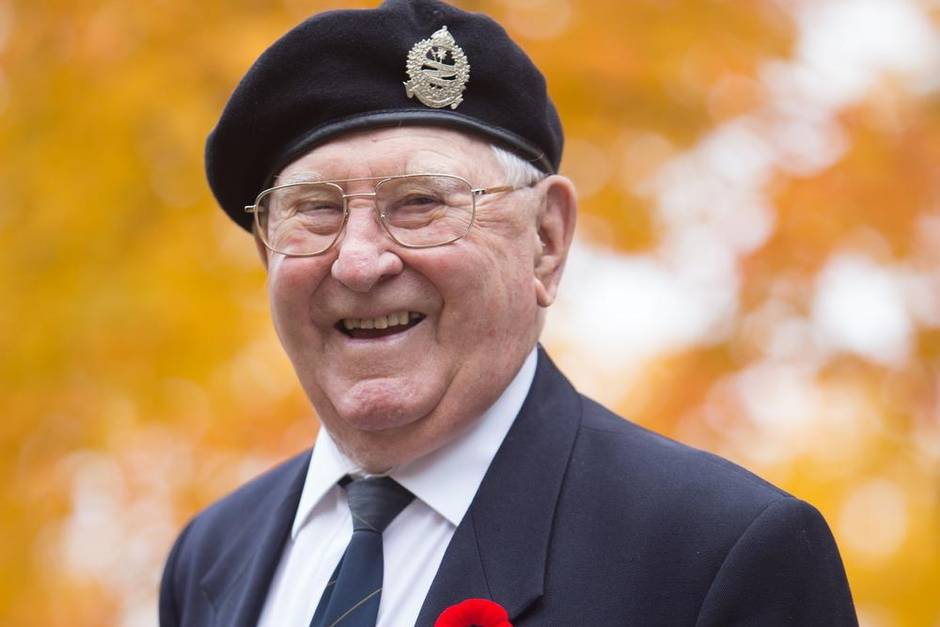 Mr. Pite now lives in Brantford, Ont., not far from the small village where he grew up. After enlisting, Mr. Pite joined the Army Intelligence Corps. He was one of 14,000 Canadian soldiers who landed on Normandy on June 6, 1944. From there, he went through Belgium and Holland and eventually to Germany, where he spent the last few months of the war. “I made it sound easy, but it wasn’t. It wasn’t easy,” he says.

My father served in the First World War.

He joined the army and went overseas right about the beginning of 1916.

People have asked me quite often why I wanted to enlist. I think it was mostly my dad being a veteran of the First World War. He was a very upright man and he made a good soldier. I think maybe that from the time I understood, I figured that I would join the army.

At that time, of course, we never thought about war. But when I was 14 or 15 I wanted to join the army. I was working on a tobacco farm in Scotland, Ontario. I had been working in tobacco since I was about 12 years old.

I enlisted in 1939. I was only 17, so I became what they called a reserve soldier. I have two brothers. One came in the army but he was quite younger than I was so he didn’t join up until the war was well established. My youngest brother had health problems.

It never entered my mind to join another branch of the military. My dad joined up in the same armoury that I signed up in many years later. I never regretted it. I was going to do what my dad did. I went into the armoury in Brantford and signed up. The really sad part was there was a large number of men who only came in because they were going to get three meals a day and they couldn’t have cared about anything else. I enlisted as just a plain private. But as time went on I ended up in the Intelligence Corps. I landed in France on D-Day. I was away for seven years and came back and went right on the farm again. 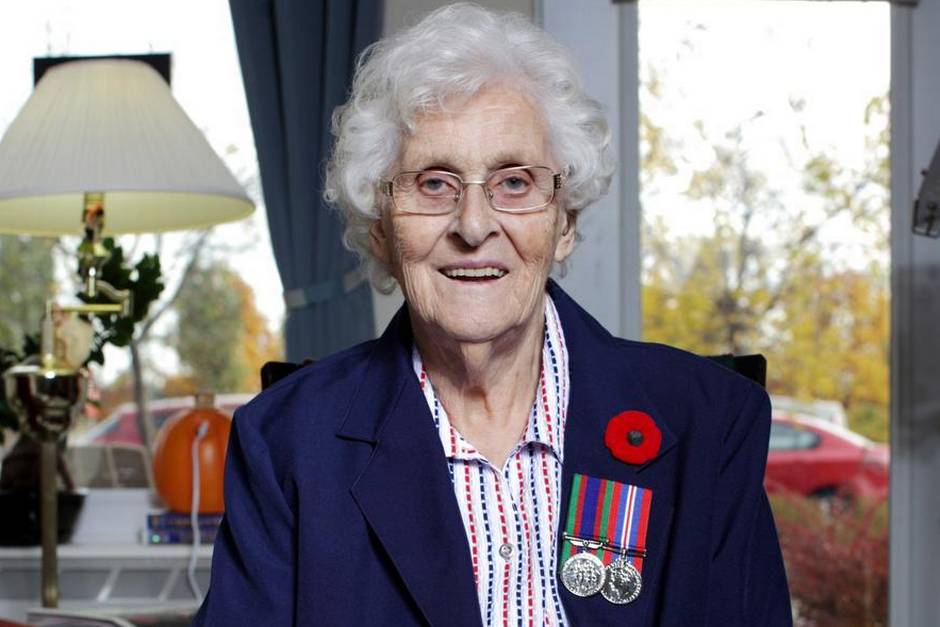 Barbara Goble of Ottawa:"I was mad I didn’t get any adventure."

Born in Montreal, Barbara Goble was one of more than 17,000 women who served with the Royal Canadian Air Force Women’s Division. The RCAFWD was established in 1941 and discontinued in 1946. WD personnel ranged from clerks to Service Police. “They gave us rations, so when I went home on weekends, my mother loved them. They were for butter, sugar, eggs,” she says

We were very poor with the Depression and that. My father was a fireman on the CPR but the trains weren’t running. He was on welfare and we were living from tenement to tenement in Montreal.

I was the oldest of seven children. I was working in a garment factory when I saw a sign that said, “We Serve That Men May Fly.” It was a recruitment sign up on a building for the Royal Canadian Air Force Women’s Division. So I went right in and joined up.

My mother wasn’t too happy. She didn’t like to see me go.

Instead they sent me to Ottawa. I was so mad. I came to Ottawa and worked in a building next to the courthouse. I lived in a barracks and worked in the basement of the post office sorting mail.

I was mad I didn’t get any adventure. But I’m glad I joined up. I’m glad I had that experience. I was in the Air Force for three years.

They didn’t send me out West, but I got even with them. My mother had an address in Calgary where she was brought up. That’s how I finally got out West. When the war was over, I said that my mother and father had moved to Calgary and I gave them that address, so they had to send me there. 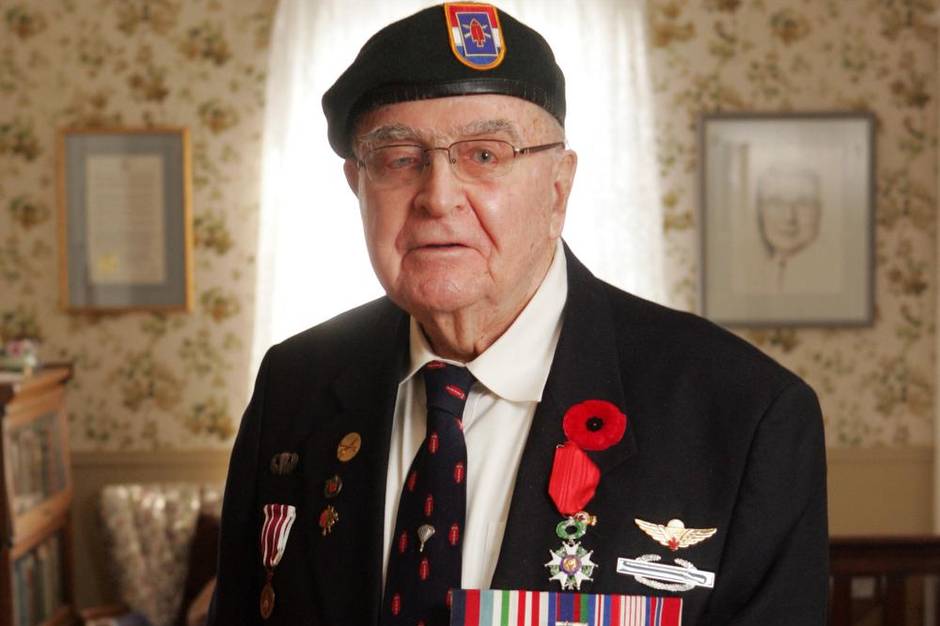 Arthur Pottle of Saint John, N.B.:"I was a Grade 8 dropout when I enlisted."

The Saint John, N.B., native served in the Royal Regiment of Canadian Artillery. His regiment helped capture Monte la Difensa in a battle depicted in the William Holden film, The Devil’s Brigade. From there, his regiment led the capture of Monte Majo. “Our outfit broke up, the First Special Service Force, because we couldn’t get Canadian replacements. All the replacements were needed in northwest Europe at the time. The guys that were still around, they sent us back to England and we trained the drivers, the cooks, the batmen and so on to become infantry,” he says.

Dunkirk had just occurred and I thought they needed everybody at that time.

I was a Grade 8 dropout when I enlisted. I was working at a great big factory here that made all kinds of valves and fire hydrants. I ran patterns from the pattern department to the foundries.

Most of the young men in the neighbourhood were in service when I enlisted. My mother and father thought it was something everyone at the time was doing, I guess.

I joined the artillery. My father had been in the infantry in World War One and he said the infantry marched too much, so get in the artillery. My next-door neighbour was a member of the anti-tank regiment that was ready to go overseas, so I went down to the armoury to enlist but by the time I got through, their complement was full.

I ended up with about a dozen others down on Partridge Island at the mouth of our harbour. I was coast artillery for a year or so and then I got transferred to anti-aircraft down in Dartmouth and Halifax. When the call came they wanted paratroopers for a special service force. I was anxious to go overseas. Everyone seemed to be going overseas. 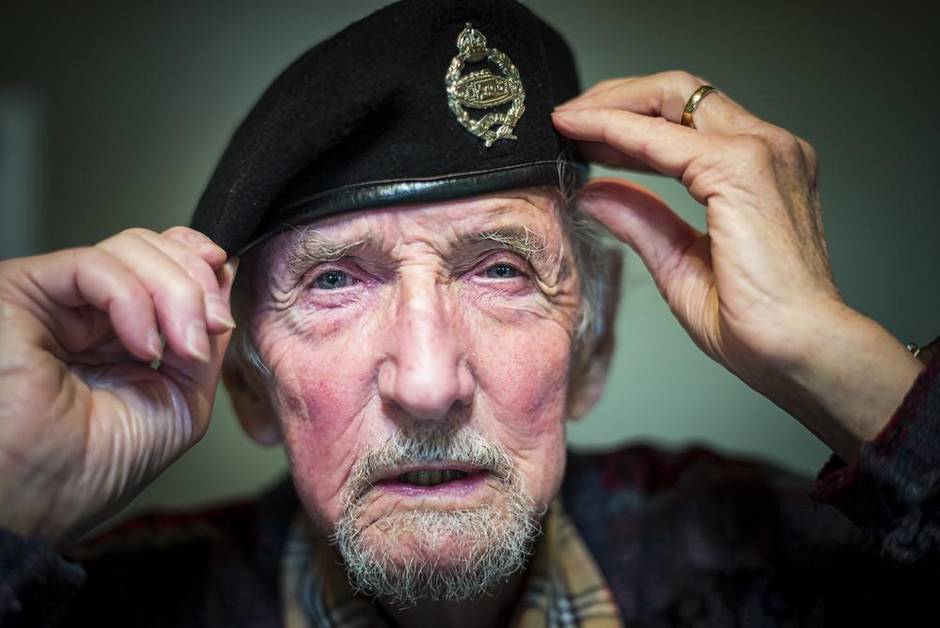 Jack Clements of Salt Spring Island, B.C.:"A lot of her friends were getting notifications that their kids were killed."

Born in Vancouver and now living on Salt Spring Island, B.C., Mr. Clements served with the 4th Canadian Armored Brigade. After arriving in Normandy in July, 1944, the Brigade made its way through Belgium and Holland and into Germany. “You were either terrified or you were bored out of your skull. Or you were relieved because you made it,” he told the Memory Project.

I was born in Vancouver. My father was a door-to-door salesman. He was in the Royal Flying Corps in the First World War, and then during the Second World War he was the recruiting sergeant for the Fraser Valley.

I had gone in mid-December, a buddy who I had known since Grade 5 and myself, and they said to come back on Jan. 1. We went back in and of course all the recruiting people had terrible hangovers.

I gave them my recruiting papers to sign. My father had already filled out the papers. The guy said, “You’ll have to come back. You’ve got your papers all mixed up.” And I said, “That’s my father. He couldn’t get over.” And he said, “Your father enlisted you?” I was 18.

I had been in the militia since I was 13. It was a machine gun regiment. When I enlisted, most of us were doing it – all my buddies. A friend and I joined up together. We headed downtown to join up. We went to see about the Navy. We went over to where the Navy headquarters were and it was shut. I can’t even remember why. So we thought, well, we’ll just go up the mountain and join up there with the Army. We weren’t even drinking. We got separated after basic training. My father was happy when I told him I was going to enlist. I don’t think my mother was happy. A lot of her friends were getting notifications that their kids were killed in Italy and places like that.

I don’t regret the decision to enlist at all. It was something I wanted to do, obviously. Otherwise I wouldn’t have done it. 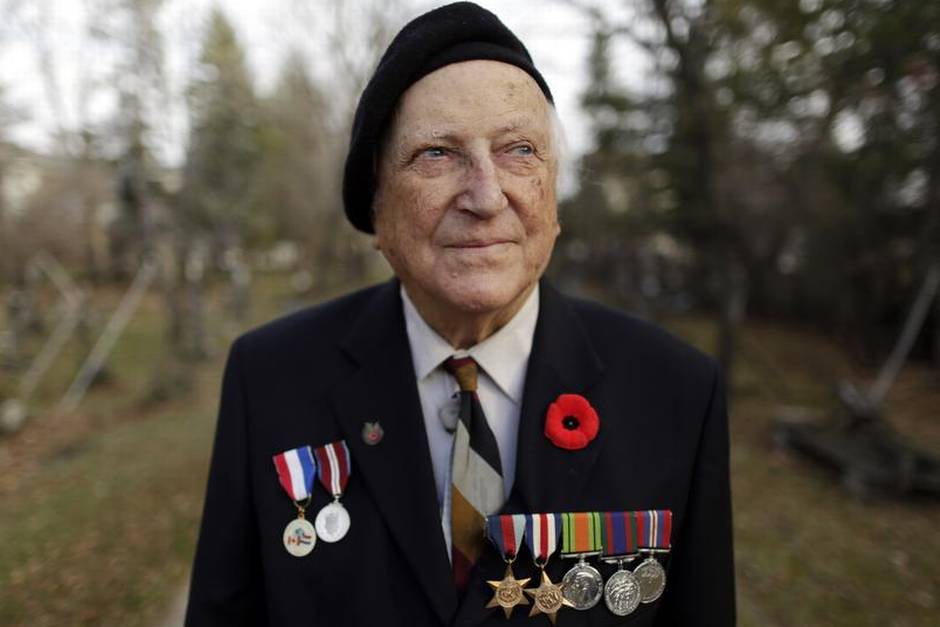 Born in Winnipeg, the city he stills call home, Len Van Roon was one of nearly 13,000 conscripted soldiers to be sent abroad. He helped direct artillery fire for the 19th Canadian Army Field Regiment Royal Canadian Artillery troops who stormed the beaches of Normandy on D-Day. “All the birds went out to the sea to escape, but of course when they got out far enough to where the stuff was being fired they couldn’t go any farther. There were thousands of birds milling about in the sky,” he says.

I’m not the military type, really. My father died when I was 11. I don’t have any brothers or sisters. My mother and I had a small poultry farm. I was conscripted in 1942. I was 20 years old.

If your name came up and you were over 18, you were in the Army. There was an appeal system, so I went through that appeal system. They looked me over, and I guess they needed bodies. So they said, “There’s no exemption for you.” I thought, Well, if you’re in, you’re in. You might as well do you what you can.

My mother was a very strong woman. She just went along with it. She accepted the fact that this was reality. My girlfriend, who was my future wife, and I decided not to get married before I went overseas. That struck me as being pretty crummy. Some people don’t come back.

But it worked out wonderfully for us.

I wrote 1,100 letters in the three years I was away. It was good therapy, especially when things were rough. It’s a way of calming people. It reminds you the real world is still there.

My job during the war was to direct artillery fire. On D-Day we were directing fire on to the beaches. We went in with British commandos on the landing craft. Initially, we cruised between the guns that were firing onto the shore, so we had a ringside seat. We had to transfer to a landing craft and that sea was rough. I could get seasick watching a boat on television, so it was so good to get onto shore. After the war, I went back to the poultry farm.