A hard winter for Canadian bees

A new report on the health of honey bees in Canada says 58 per cent of the colonies in Ontario did not survive the winter.

Among the possible causes cited for the colony failures are starvation during a long winter, weak queens, viruses, and poisoning from pesticides, said the Canadian Association of Professional Apiculturists (CAPA), which compiled the survey.

The report comes as the Ontario government moves toward a system of restricting or licensing the use of neonicotinoid pesticides, a widely used class of chemical linked to the losses of bees and other pollinators that are vital to the food supply.

According to the CAPA report, the Canadian average of overwintering bee losses was 25 per cent, a number that falls to 19 per cent when Ontario is excluded.

"This level of winter loss is considered a high winter loss for most Canadian beekeepers…" the report said. "Clearly the impacts of pest, pathogen and environmental factors continue to be a challenge through the year to beekeepers across Canada."

For the latest winter, New Brunswick had the second highest percentage of honey bee losses, 26 per cent. Alberta, which has the largest number of colonies, lost 18.5 per cent of its honey bee colonies.

Beekeepers and a growing body of scientific research say the neonicotinoid class of pesticide that has become widely used in the past decade is contributing to the decline in populations of bees and other pollinators. They say the chemicals designed to protect crops against worms and other pests are weakening beneficial insects and making them more vulnerable to viruses, parasites and loss of food supply.

Neonicotinoids, known as neonics, are applied by the seed companies on corn, canola and some soybeans. They are also used by vegetable farmers and growers of ornamental flowers.

The pesticide is systemic, which means it is present throughout the plants, including the nectar and pollen eaten by honey bees and other insect pollinators that are responsible for a third of the food humans consume.

Bayer CropScience, the largest maker of neonic-coated seeds in Canada, says the chemical is safe, and that there is not enough of the pesticide in crops' pollen and nectar to be lethal to bees.

That view is not widely held in the honey industry.

"This is a systemic pesticide that is designed to kill something that tries to eat it. So when a bee tries to eat from the flower, there's still a little bit of poison there," said Dan Davidson, president of the Ontario Beekeepers' Association and a beekeeper in Watford, Ont., who lost about 35 per cent of his bees last winter.

Beekeepers say winter loss tallies underestimate neonics' toll on bee populations because they do not include the ones that disappear in the summer.

"They collapse throughout the summer, and that doesn't stop in the wintertime, it's just beekeepers are not cleaning up the mess because it's frozen. It's just a bigger pile [of dead bees] in the spring," said Tibor Szabo, who breeds queen bees and is vice-president of the beekeepers' group.

A harsh winter is cited as one of the reasons bee deaths are so high in Ontario. But winter was extremely cold and long in much of Canada, so why were losses not as deep elsewhere?

The answer is unclear, but could lie in one of the province's most important crops, corn. All corn is coated with neonics, and Southern Ontario's warm climate makes it one of the few suitable areas to grow the crop used for ethanol and animal feed. The province grows 62 per cent of the country's corn, followed by Quebec at 30 per cent, Statistics Canada says.

Planting the irregular-shaped corn with air-pressurized seeders kicks up enough dust with the pesticide in it to affect bees adversely. (Bees do not feed on corn pollen; the crop is wind-pollinated.) At Health Canada's direction, seed companies and growers took steps this year to reduce the amount of dust generated by seeding machines, using a waxy lubricant with the seeds and fitting machinery with air deflectors.

Density is another possible factor in the numbers of bee deaths in Ontario. The province's ever-shrinking farm country means fewer bee-friendly meadows and fallow fields, said Dan Davidson of the Ontario Beekeepers' Association. And beekeepers who want to move their hives away from a farm planting corn have fewer places to go.

The move to control use of pesticides

Last winter, Europe banned for two years the use of three types of neonicotinoids. The pesticides, which generally coat seeds, are widely used in North America on corn, canola and about 50 per cent of soybeans, in addition to greenhouse flowers and vegetables. Provinces lack the power to ban pesticides, which are regulated by Health Canada. But Ontario is poised to become the first to regulate them by moving toward a licensing system that would require commercial growers apply to use them.

"Our goal is to develop a system that targets the use of neonicotinoid-treated seed to areas or circumstances where there is demonstrated need, recognizing the important role both pollinators and farmers play in Ontario's agrifood industry," Jeff Leal, Minister of Agriculture, Food and Rural Affairs, said in a statement on Wednesday.

Bees are in trouble worldwide. Between 2006 and 2011, the average yearly decline in managed honey bee colonies in the United States was 33 per cent, the U.S. Department of Agriculture says. In the United Kingdom, 29 per cent of honeybee colonies did not survive the winter of 2012-2013, the highest death rate in Europe.

For some fruit growers in China, fewer bees means they have to take matters into their own hands, standing on ladders and using small brushes to do the job of the insects.

"Insect pollination is a vital ecosystem service that maintains biodiversity and sustains agricultural crop yields. Social bees are essential insect pollinators. So it is concerning that their populations are in global decline," Guelph University professor Nigel Raine said in a study published in the journal Functional Ecology. 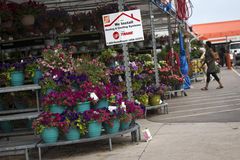 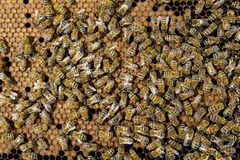