He brilliantly negotiated the Olympic mogul course on the way to a gold medal, and then freestyle skier Alexandre Bilodeau cut some deft turns on far less familiar ground.

When a reporter from Britain pointed out that were Quebec a country, it would be second in the medal count, Mr. Bilodeau swerved around the sovereignty debate. "We're both proud to be Quebeckers," he said pointing to silver medalist and fellow Quebec native Mikaël Kingsbury. "But we're very proud to be Canadians … yes, we do a lot of good things in Quebec but there are great things all across Canada."

The medals won by Mr. Kingsbury and Mr. Bilodeau were the sixth and seventh Canada has captured at the Sochi Games. As of Tuesday morning, six of Canada's nine medals have been captured by Quebec athletes, including three golds.

Short-track speed skater Charles Hamelin, who also won gold on Monday, was the only Canadian double-gold medalist at the 2010 Olympics; overall, Quebec-based competitors won eight of the 15 individual medals awarded to Canadians in Vancouver.

In Sochi, Quebec-based athletes have posted the top Canadian result in all but five of the 18 competitions held so far in which Canadian athletes are represented.

The obvious question is: Why? Poet and singer Gilles Vigneault surely provided part of the answer with his iconic Quebecois hymn Mon pays c'est l'hiver, but that's not an especially comprehensive explanation. There are many facets to the answer, from Quebec's geography, to bigger and better funding for Quebec athletes that has led to nearly 40 per cent of Canada's Sochi delegation hailing from the province.

But there are more ephemeral elements, too – the small gesture of a sporting idol autographing a ski jacket, and years later, an athlete stepping onto an Olympic podium. That's precisely what happened this week in Sochi when 41-year-old former Olympic champion moguls skier Jean-Luc Brassard (the signer) was on hand to watch 19-year-old Justine Dufour-Lapointe (the signee) win the women's moguls event.

You can draw a straight line between what Brassard did in Lillehammer 20 years ago and an event involving an athlete who wasn't even around to see it, the story of the success of Quebec athletes at this Games is at least partly one of athletes building dreams for subsequent generations.

Ms. Dufour-Lapointe is following in tracks set by Mr. Brassard (whose own idols were the Crazy Canucks), the short-track speed skating team is populated by athletes inspired by Gaëtan Boucher, cross-country skier Alex Harvey is completing the legacy of his Olympian father Pierre.

"You should never discount the power of inspiration," said world champion and three-time Olympic downhiller Mélanie Turgeon, "when athletes succeed in accomplishing great things, and then are around to give back, it's a powerful thing." She should know. Super-combined skier Marie-Michèle Gagnon of Lac-Etchemin, Que., who crashed in the slalom portion Monday, talks about being spurred on by Ms. Turgeon.

The latter now works with figure skaters as a mental preparation coach and cites the proximity between Quebec's sports stars and youth athletes as a key factor.

According to Ken Read, a former Crazy Canuck and one-time director of winter sports at Own The Podium, Quebec's biggest advantage lies at the provincial funding level. Mr. Read cited provincial tax credits ($6,000 per year for carded athletes) and direct financial support to sporting associations, saying Quebec is especially effective at getting its athletes from recreational sports to the high-performance realm. "That's where Quebec stands alone," he said.

In 2012-13, the province's regional sporting structure provided $2.6-million to amateur sports – leveraging the relatively low cost of living and plentiful supply of dieticians, physiotherapists and sports psychologists produced by the province's 10 universities. Alberta, home to the largest number of national training centres in the country, contributed $159,000.

There's also a tighter strategic alignment between the provincially funded bodies and the national level, which Mr. Read said "is critical in moving athletes to the elite level" – Quebec as a model of national-provincial integration.

Mr. Read suggested Quebec benefits from its clarity of purpose – putting as many athletes as possible on national teams – which has shifted to having as many top performers as possible; why be content just to be there if you have the horses to take over?

Other experts point out Quebeckers embrace sports practised only sporadically in the rest of Canada – short-track is the obvious example.

Most of Quebec's population is not much more than an hour's drive from mountains and forests with thick, lasting snow cover and winter trails. There is also lots of infrastructure; Quebec City has a speed-skating oval and a lakefront ramp that allows skiers to practise acrobatics in the summer.

Mr. Brassard said his home province's dominance in freestyle is a function of smaller mountains and learning to ski in often crummy conditions. "We're kind of a victim of our mountains," he said. "Our mountains are very small and they suit very well a mogul course and basically every centre has a mogul course."

As it is elsewhere in Canada, Olympic glory is a rare, nearly unanimous rallying point in Quebec. Even the omnipresent Canadian flags draped around Quebec gold medalists and the hand Justine Dufour-Lapointe put on her heart during the Canadian national anthem fail to dampen the enthusiasm of dyed-in-the-wool sovereigntists.

Pierre Curzi, an actor and former Parti Québécois politician, confessed to being "overtaken by incredible emotion."

"Each time there is a medal, we all become Canadian, which in my case is a pretty serious matter," said Mr. Curzi during his regular radio spot on 98,5 FM. "That's sport. We get caught up in the beauty of competition, the emotion, and there's a national sentiment residing in all of us."

Downhill skier Erik Guay, biathlete Jean-Philippe Le Guellec and Harvey all have legitimate podium hopes in events later in the Games; Mr. Hamelin triumphed Monday in the 1,500 metres, his weakest event – he will skate in three more events, and could conceivable win medals in each.

But some in the amateur sports establishment warn that the development pipeline – in Quebec and elsewhere – isn't flowing as freely as it has in the past, and that the current crop of athletes owes a great deal to the money spent ahead of Vancouver.

There are doubts, then, as to whether the results in Vancouver and Russia, to this point at least, are sustainable.

Today, Quebec and its athletes are happy to revel in the golden glow. 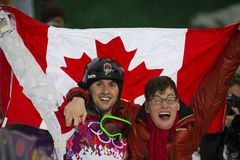 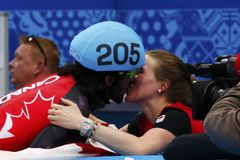 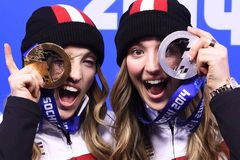 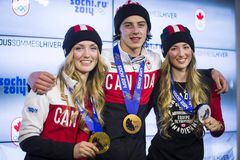 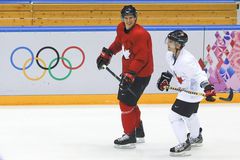 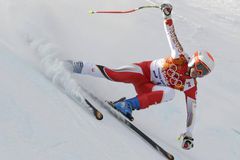 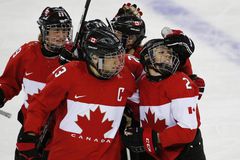 Follow Paul Waldie, Sean Gordon and Les Perreaux on Twitter @PwaldieGLOBE @MrSeanGordon @Perreaux
Report an error Editorial code of conduct
Due to technical reasons, we have temporarily removed commenting from our articles. We hope to have this fixed soon. Thank you for your patience. If you are looking to give feedback on our new site, please send it along to feedback@globeandmail.com. If you want to write a letter to the editor, please forward to letters@globeandmail.com.
Comments