Jim Thomas has given up on using the 15-foot sailboats he keeps propped against the dock behind his cottage. In the 12 years since he and his wife, Pat, bought a bungalow on the edge of Georgian Bay, they've watched their shoreline slowly recede, creating a grassy patch behind their home and making it impossible to launch the crafts without damaging them.

Mr. Thomas, 77, says he's willing to roll with the punches of a rapidly changing environment. When the wind is blowing in his favour, he can navigate into the bay in a grey rubber dingy he keeps by the dock. Other times, he drives to nearby Midland, where another boat is stored in deeper water.

Still, with water levels in Georgian Bay nearly 60 centimetres below the historic average, many of his neighbours are rallying against a trend they say is damaging coastal wetlands and destroying their property values. Some have advocated an engineered solution to the problem, such as inflatable rubber weirs to displace water, or installing fish-friendly "speed bumps" in the St. Clair River, downstream of Lake Huron.

But the perennial challenge of managing the Great Lakes is that it's largely a zero-sum game: more water for the vast middle lakes of Michigan and Huron means less for Superior, Erie or Ontario.

"You only have so much water to go around, so if you take it from here, it comes out of there," says Ted Yuzyk, who works with the International Joint Commission, a body set up by the Canadian and U.S. governments to monitor trans-boundary environmental agreements.

Mr. Yuzyk was the Canadian co-chairman for an IJC-commissioned study of water levels in the lakes. Released in March, the study advocates close monitoring of the lakes and more provisions for incremental tweaks. But because it stays away from any dramatic changes to raise the water level in Lake Huron, many residents and environmental groups see it as a "do-nothing" approach to a problem that required rapid action.

"There is a do-nothing crowd [who disagree with the study]," Mr. Yuzyk acknowledges. "But there's also a crowd that says don't screw up – anything more than you've already done."

The St. Clair River, which flows out of Lake Huron, has been dredged multiple times over the past 150 years to open it up for larger commercial vessels. But by scraping away at the bottom of the river, the projects increased the flow of water out of Huron and Michigan, dropping their height by an estimated seven to 14 centimetres compared with downstream Lake Erie.

After a dredging in the 1960s, officials said to install speed bumps or weirs to compensate for the change, but several years of heavy rains persuaded them the structures wouldn't be necessary.

The largest part of the drop in the lakes' water levels is attributed to climate change: shorter winters and dry, hot summers meant more water evaporating from the lakes than was going back in through precipitation.

A final effect, called the glacial isostatic adjustment, is slowly tilting the Great Lakes basin, causing water to be gradually displaced from the northeast to the southwest. The earth's crust is still rebounding from the weight of the glaciers that carved out the Great Lakes thousands of years ago, and like a pillow that's been compressed, the northeastern portion of the Great Lakes basin is gradually – and very slightly – rising. Because the southwestern section was not compressed as much, it's rising more slowly.

Mr. Yuzyk points out that many residents along the shores of Lake Michigan are happy with water levels as they stand – and worry any increase could flood their area.

"Yes, we can raise water levels on Michigan and Huron. The issue is that it has different implications on the U.S. and Canadian side," he said. "On the Canadian side it helps out. On the U.S. side, which is highly sandy beaches – and that's very erodable – that would create problems for them. So even on one lake you have two groups that have totally different perspectives."

Today, the drop in lake levels is creating a politically charged battleground, with environmental groups accusing the study's authors of obscuring their findings and failing to consider a broad enough spectrum of alternatives. One local residents' association says it plans to meet next month with Treasury Board President Tony Clement and other ministers to lobby for a plan to raise the water levels.

Mary Muter, who chairs the Sierra Club Ontario's Great Lakes section, said she wants to see Lake Huron and Michigan levels increased gradually by 25 centimetres to make up for what's been lost over the past 40 years.

She said the drop in water levels has already resulted in the destruction of wetlands in Georgian Bay, damaging plant and animal habitat. When she first started to work with researchers studying regional wetlands in the early 2000s, Ms. Muter said she and others had hoped the drop was part of a normal cycle.

"All Canadians should care about this. This is 20 per cent of the world's fresh water supply, and if we are depleting it because of human activities, then we are drawing down a mainly finite resource," she said.

There are two points of control on the Great Lakes: a set of gates and dams that regulates the flow out of Lake Superior, and another dam that controls the flow out of Lake Ontario. Bob Duncanson, director of the Georgian Bay Association, says he wants governments to consider more tools to regulate the lakes in between: Michigan and Huron (which are in fact two lobes of the same lake) and Erie.

"It's a big issue, and we think it's only going to get worse," Mr. Duncanson said, adding that he wants scientists to "think outside the box" about possible solutions. "We have to believe that there are, in this day and age, bigger and better ideas than were looked at in the fifties and sixties," he said.

"It's certainly been a very politically charged issue, interestingly enough, on the Canadian side," Mr. Yuzyk said. While the commission had low turnout at the public meetings it held this summer in the United States, people around Georgian Bay came out in the hundreds to voice their concerns about the report.

Pat Thomas says she doesn't miss having the boats at the dock, but watching the water retreat behind their cottage is a disappointment.

"It's really disconcerting," she says, gazing at the water from the end of the couple's weed-choked dock. "Each year it seems to get lower." 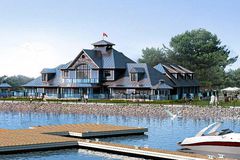