At the end of a remote gravel road in southern Saskatchewan's Qu'Appelle Valley is the next target in a growing movement to rid North America of its horse slaughterhouses.

Horse advocates in both Canada and the United States are outraged that this vast green valley, lush and rolling, is now home to this country's newest federally licensed horse abattoir: Natural Valley Farms Inc.

They are also concerned that even more Canadian companies may start slaughtering and processing horses in a bid to satisfy hungry overseas markets that crave horsemeat, a pricey delicacy in many countries, since the industry is headed for extinction in the United States.

"This is all happening under the radar. Ask most people, and they have no idea that horses are even slaughtered in Canada for meat," said Shelley Grainger, director of the Canadian Horse Defense Coalition's eastern region.

Her group wants the practice outlawed in Canada, arguing it is inhumane and repugnant because horses are commonly regarded more as pets and sporting animals than livestock. The coalition is also calling for a national ban on the shipment of live horses to other countries for human consumption.

Currently, almost all the horsemeat processed in Canada by the six licensed horse abattoirs is exported to Europe and Asia, although there is a small domestic market for the product in Quebec. According to Statistics Canada, the top importers of Canadian horsemeat last year were France, Japan, Mexico and Switzerland.

The industry is worth an estimated $60-million annually in Canada.

Steven Rei, an American anti-horse-slaughter lobbyist and founder of the National Equine Rescue Coalition, said Natural Valley Farms' decision to begin slaughtering horses this summer is proof that Canada is already benefiting from the shutdown earlier this year of two of the three remaining horse slaughterhouses in the United States. (In 2006, about 88,000 horses in the U.S. were killed and processed into horsemeat.)

The last operating slaughterhouse in the U.S., located in DeKalb, Ill., is struggling to remain open while it fights a new state law aimed at putting it out of business for good. It has been shipping its meat to U.S. zoos for feed, and overseas for human consumption, for about two decades.

The horsemeat contract Natural Valley Farms recently signed is with Velda Group, the Belgium-based parent company of the business that owns the troubled Illinois slaughterhouse.

Ken Piller, president of Natural Valley Farms, was extremely reluctant to talk about the controversy surrounding the meat plant's move to begin slaughtering horses at its facility south of Neudorf, Sask., a farming community of about 300 located 1½ hours east of Regina. The meat is processed at a plant in nearby Wolseley, Sask. It took several unreturned phone calls and an unannounced visit to the company's Neudorf plant before he agreed to speak.

"We saw an opportunity here," Mr. Piller explained in an interview. "I really don't want to talk about the politics involved."

According to Mr. Piller, the producer-owned business opened in 2005 and has been struggling ever since. The meat plant, which has tried to set itself apart from competitors by only producing hormone- and antibiotic-free beef, received money from the Saskatchewan government to help get started.

Mr. Piller, whose family has been farming and ranching in the Qu'Appelle Valley for several generations, said that to keep the company's two plants operational and its 150 employees busy, side ventures such as processing horse meat are necessary. Even as late as April, it had to lay off some workers because of a lack of work.

Mr. Piller understands that slaughtering horses for meat is an emotionally charged issue for many, but added: "Nobody in Saskatchewan cares. Everybody here raises horses ... Everybody understands at the end of the day there has to be a cull."

Mr. Piller said about 95 per cent of the horses slaughtered at Natural Valley Farms are from Canadian suppliers, and that many are "retirees" - often older, unwanted animals, including former racehorses.

Despite the collapse of the U.S. horse-slaughter industry, he doesn't expect more Canadian companies to rush in to fill the void. Mr. Piller said it's a difficult business to get into and that to ship product to Europe requires European Union certification, which Natural Valley Farms already had.

If anything, he expects Mexico will benefit more than Canada from the closing of American horse abattoirs.

People living near Natural Valley Farms' slaughterhouse are generally supportive of the company's move to produce horsemeat for foreign markets. "The plant has been good for this community. It has brought money and jobs here," said Glen Bender, who works at Cooper's General Store & the Chicken Coop Cafe in Neudorf.

Not all locals are happy with what's happening at the plant. Mr. Piller's uncle, Raymond Piller, a 70-year-old farmer, shook his head and said: "Those poor, poor horses. But I know that they have to do what they have to do to keep that place running. They've had a hard go of it."

Ms. Grainger said that while only a small percentage of horses in Canada are sent to the slaughterhouse (about 50,000 annually), there is no need for any of them to end up there.

"The fact is that my horse is my pet, just like my dog and my cat. We don't slaughter our pets for people to consume," she said. "Horses are a part of our culture in a way that traditional livestock aren't."

Ms. Grainger admits the anti-horse-slaughter lobby in Canada isn't as strong or organized as its counterpart in the U.S., but she expects it to gain steam as the "hidden industry" is exposed to more Canadians.

The process is similar to how cattle are slaughtered: The animal is usually stunned with a captive bolt pistol that drives a spike into its brain and renders it immediately unconscious. Ken Piller, president of Natural Valley Farms, a Saskatchewan-based meat plant that slaughters horses, said compared with other animals the horse "is probably the easiest and cleanest animal to process."

Humans have eaten horsemeat since the beginning of time. However, as with pork and beef, some religions have either discouraged or banned the consumption of it over the centuries. For example, in 732, Pope Gregory III issued an edict to Roman Catholics that forbade them to eat it.

Today, the meat is generally considered to be taboo in most English-speaking countries such as Canada, the United States and Australia. However, many European and Asian diners still regularly enjoy the delicacy. China is the leading producer of horsemeat.

The high-protein, low-fat meat is often described as tasting slightly sweet and similar to beef.

How is it usually prepared?

Similar to other meats, horsemeat can be prepared in numerous ways: smoked, salted, grilled, even eaten raw.

Almost all the horsemeat processed in Canada by the six licensed horse abattiors is exported. 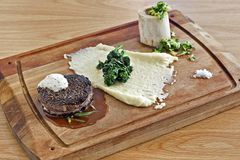