Often-overlooked Winnipeg, a city that had become predominantly known for wind, bugs, crime and floods, is experiencing a quiet renaissance, reinventing itself at every level and embracing its past in an effort to shore up its future.

The most visible change to the Manitoba capital's landscape, and likely its psyche, is the imminent return of the National Hockey League. This was the news that had hundreds of people celebrating in Jets sweaters at the corner of Portage and Main last week, with the city's True North Sports and Entertainment, owners of the MTS Centre, a recently completed downtown arena, expected to announce the purchase of the Atlanta Thrashers on Tuesday.

The move comes 15 years after Winnipeg lost the financially troubled Jets in 1996 when the team moved to Phoenix, and Mayor Sam Katz said recently that the return of major league sports is simply "correcting something that never should have happened."

But hockey alone cannot save a city. Winnipeg is in the midst of some major course corrections, most importantly a return to its roots with an ambitious plan to re-establish itself as a major transportation hub, one that will be built largely around the belief that rail shipping, too, is poised to make a comeback.

"There is no one silver bullet that addresses this problem," Mr. Katz said recently of revitalizing Winnipeg. "Every one is a piece of the puzzle, People thought, okay, you build the MTS Centre, everything's going to be wonderful. Well it doesn't work that way. That was asking too much and expecting too much. But a lot of good things are happening right now."

CentrePort Canada, a 8,000-hectare inland port being developed on the city's edge is a one-stop shop for air, truck and rail shipments and is designed to reroute North American trade through the middle of the country.

"The history of Winnipeg is as the gateway to the west and the so-called Chicago of the north," said Diane Gray, CentrePort President and CEO. "Without that history we wouldn't have the assets we do today, especially when it comes to rail."

Last week, CentrePort announced an agreement with two Chinese partners, including the country's largest private shipping company, Minsheng International Freight Co. The deal will create a new container-based rail system that will quickly move crops from the Canadian prairies into the Chinese market.

Until now, much of the canola and soybeans bought by China has been exported through Chicago, carried from farmer's fields by truck. Crops must be unloaded and repacked at shipping ports and the journey to China can be a long one, with the potential for products to spoil before they reach their destination.

But with fuel prices rising, many experts predict a growing reliance on rail, especially when it comes to feeding demand from the populous Asian continent. Products packed into shipping containers do not have to be reloaded at different ports of call, and can be delivered in a faster, more streamlined manner, with less of an environmental toll.

Winnipeg is not alone in predicting that rail shipping will be a major force in the coming years.

Both those lines, along with the Canadian Pacific Railway, run through land controlled by CentrePort.

Ms. Gray said container shipping is rapidly gaining popularity in the U.S., South America and around the globe.

"It just hasn't become ingrained yet in Canada," she said.

The CentrePort project was born in 2008, when Mr. Katz struck a task force to explore how the city could capitalize on its geographic location and transportation history.

They recommended the creation of the inland port, and former Manitoba premier Gary Doer was asked to lead an initiative bringing together all levels of government with labour and business communities to expedite its development.

Support for the project has been immediate and unequivocal. In 2008, the Manitoba government voted unanimously to create the CentrePort Canada Act, empowering the province, city and airport authority to work together to develop the land around a single plan.

The federal government stepped in to designate the area a foreign trade zone, allowing for sales-tax exemptions and duty deferrals within its parameters.

And Centreport was one of 18 companies, along with Facebook, Ericsson and Rogers Communication, invited to meet with Finance Minister Jim Flaherty during his pre-budget "listening tour" last fall.

Even the country's transportation infrastructure has been changed in anticipation of a growing reliance on container shipping. Ottawa has invested heavily in modifying railway tunnels and bridges across the country to accommodate double-stacked containers.

And a $212-million road called CentrePort Canada Way is under construction to ensure that heavy commercial truck traffic into the facility doesn't interfere with urban roads.

Investment in an industry, and a region, once considered past its prime is also occurring throughout Middle America, according to Joel Kotkin, author of The Next Hundred Million: America in 2050.

In a book about population trends over the next 40 years, Mr. Kotkin says the American heartland, written off during the Information Age, is about to experience a resurgence due to its control of the country's commodity exports.

"What you're seeing all over the world is the rediscovery of these kinds of places," he said. "In this next phase in the world's economic development, many of these long-overlooked, inferior places are going to become more strategically important."

Indeed, Ms. Gray was in Kansas City this week addressing the convention of North America's Corridor Coalition, which advocates for shipping through the middle of the continent, from Winnipeg, through the central U.S. and into Mexico.

Barry Prentice, an expert in supply chain management at the University of Manitoba, said cities within Mexico, as well as Kansas City and Regina, are all developing inland shipping ports.

As for Winnipeg, he said the city's fortunes rose and fell with the history of the national railway in the 20th century, and will soon rise again through CentrePort. "The future is the past," he said.

The opportunities now being presented to the city via its railway assets are part of "the beauty of slow growth," he said. If Winnipeg had grown faster over the last 50 years, he believes much of its valuable infrastructure would have been destroyed.

"The airport would have been shut down and moved 50 kilometers out of the city and we would have never had this industrial land so close to downtown to turn into CentrePort," he said. "We've had this elegant amount of time to make decisions and for things to be remain in place which are very desirable today."

Yes, hockey is coming back to the city, but as Mr. Katz proudly pointed out, it will return to a whole new place. "This is a very different Winnipeg than it was 15 years ago," he said. 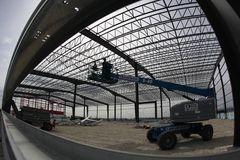 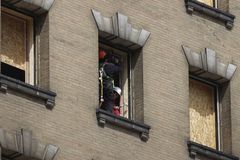 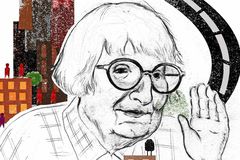