In a dramatic finale to one of the most lurid twin murder trials Toronto has seen in years, a woman charged in the axe slaying of her boyfriend was convicted of first-degree murder last night, six months after her co-accused former female lover was acquitted on the same charge.

Clad in a white cable-knit sweater and rising from the defence table to hear the verdict, Nicola Puddicombe, 36, appeared shaken as the five-woman, seven-man jury delivered its decision on the third day of deliberations.

Ms. Pechaluk, found not guilty at her own separate trial, was the star prosecution witness at the Puddicombe trial.

At both trials, the Crown theory was that Ms. Pechaluk wielded the axe that killed Mr. Hoy, but that the murder was a joint conspiracy by the two women.

And at both trials, Ms. Pechaluk denied killing Mr. Hoy but pointed a finger squarely at Ms. Puddicombe, once her beloved partner, who she said spent weeks discussing ways of killing Mr. Hoy.

The Puddicombe defence contended that Ms. Pechaluk was indeed the murderer and that Ms. Puddicombe took no part in Mr. Hoy's death.

At the Puddicombe trial, that created the unusual situation of defence and prosecution agreeing on the identity of the killer.

Half an hour after the verdict in the crowded Superior Court courtroom yesterday, Madam Justice Mary Lou Benotto handed Ms. Puddicombe the automatic sentence of life imprisonment for committing what the judge described as "a very cowardly act." Ms. Puddicombe will have little chance of parole for at least 25 years.

Constant visitors during the 10-week trial were Mr. Hoy's China-born parents, Norman and Anna, aged 74 and 75, respectively. They appeared immensely relieved at the outcome and both gave brief victim-impact statements in which they thanked police and prosecutors and lauded the justice system.

The increasingly tense wait for the jury's verdict had added urgency for the couple, who were leaving for China this morning on a long-scheduled trip to dispose of property they own there.

"We suffered every day, every minute," Mr. Hoy said, his voice rising, describing the three years since the death of their only son, who shared their Etobicoke apartment.

Also in the courtroom for the verdict, looking grim, were Ms. Puddicombe's Guyana-born parents, Rudy and Joan.

"This has been a great tragedy for everyone involved," said Mr. Stern, Ms. Puddicombe's lawyer.

Dennis Hoy, a 36-year-old GO Transit constable, was killed in October, 2006. He died as a result of six blows to the head, inflicted with the blunt side of a camping axe, an autopsy found.

The trials of the two women were subsequently held separately.

And a major difference between the two trials was that the Puddicombe jury heard Ms. Pechaluk admit to homicide detectives that she had killed Mr. Hoy.

Ms. Pechaluk's confession - which she later retracted - was ruled inadmissible at her trial because when she uttered it, police had failed to advise her she was entitled to legal counsel. It was, however, played for the Puddicombe jury.

Ms. Pechaluk was acquitted after testifying in her own defence - a rare move for a defendant accused of murder.

Then followed the trial of Ms. Puddicombe, who was accused not of swinging the axe but of persuading Ms. Pechaluk to do so.

Ms. Puddicombe, a Loblaws customer-service manager until her arrest, did not testify, and Mr. Stern presented no evidence on her behalf.

Prosecutors Tom Lissaman and Maureen Bellmore alleged the women were motivated by a desire to get Mr. Hoy out of their lives and to get the proceeds of his life-insurance policy.

"She said she would hit him in the back of the head, say she was in the shower and call police," Ms. Pechaluk testified.

Had Ms. Pechaluk decided not to retell the story she rendered at her trial, she could have been charged with perjury, which in this instance could have meant up to 14 years imprisonment.

Other prosecution evidence suggested the two women considered various ways of getting rid of Mr. Hoy, including poison. 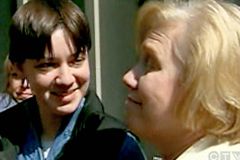 Accused in lesbian axe-murder trial acquitted
June 4, 2009
Follow us on Twitter @globeandmail Opens in a new window
Report an error Editorial code of conduct
Due to technical reasons, we have temporarily removed commenting from our articles. We hope to have this fixed soon. Thank you for your patience. If you are looking to give feedback on our new site, please send it along to feedback@globeandmail.com. If you want to write a letter to the editor, please forward to letters@globeandmail.com.
Comments are closed