The union that represents workers at the Alberta meat plant where a bacteria outbreak has prompted a massive recall of beef says workers were fearful of raising concerns about food safety and managers refused to discuss the problems.

Doug O'Halloran, the president of United Food and Commercial Workers Local 401, told reporters on Wednesday that the only way to find out what really went wrong at the XL Foods plant in Brooks is for the provincial government to call a public inquiry.

"How do you have the fox looking after the chickens?" Mr. O'Halloran said. "It's the same thing with food safety. If the government is doing that job and they are not doing it properly, how can they investigate themselves? You have to have an outside body who doesn't have any pressures on them to be able to do a thorough investigation."

Mr. O'Halloran also called for whistleblower protection for workers like those at XL who saw safety standards lapse as a result of what the union describes as an impossibly fast pace of work coupled with inadequate training.

"The line speeds, when they get up high, you don't have time to clean your knife properly," he said. "If the line speed is too great, you cheat. You don't have enough time to do it. And, consequently, you are not doing all the things [required for] cleanliness."

But workers who complained were putting their jobs on the line, the union boss said. "The odd time that somebody does come out and speaks out, they get fired," he said. "Right now, unless you had a videotape or a picture of something, you can't take a chance on coming forward."

That is particularly true of the increasing number of temporary foreign workers who can be sent back to their home countries if management is unhappy with what they have to say, Mr. O'Halloran said.

And despite repeated warnings about food safety that were raised by the union, he said, XL's management refused to listen.

The plant has been shut down since Sept. 27 – more than three weeks after the bacteria was first detected. More than 1,800 products have been recalled, and at least 12 people across Canada have fallen ill as a result of eating meat processed at XL, most of them in Alberta.

A team of inspectors from the Canadian Food Inspection Agency (CFIA) toured the plant on Tuesday to review the company's protocols and procedures. Their report is now being reviewed by senior officials at the agency to determine whether XL can be reopened.

"This is only one step in a multi-step process," Guy Gravelle, a CFIA spokesman, said Wednesday. "We are taking time to carefully review the report, before making any decisions on next steps."

But Mr. O'Halloran said the CFIA, which had 40 inspectors in the plant when it was in operation, should have clamped down on food safety long ago.

"Imagine a poor worker who is getting paid $17 an hour who needs his job," he said. "Do you think he or she is going to complain about something when government inspectors and the agency aren't rolling up the flag?"

Gil McGowan, the president of the Alberta Federation of Labour who also attended the news conference, said the federal handling of the E. coli outbreak suggests that the government has forgotten who it works for.

XL Foods maintains it has always welcomed input from its workers. In a statement, co-CEO Brian Nilsson said he was "saddened that the UFCW has chosen to attack the workmanship of its many members. We have extensive training programs for new workers and hold our workers in the highest regard for their abilities." 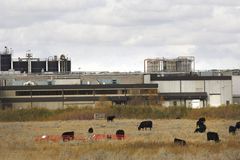 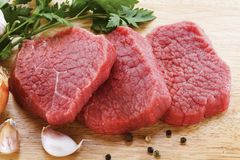 U.S. says it got almost triple the amount of recalled beef than it thought
October 8, 2012 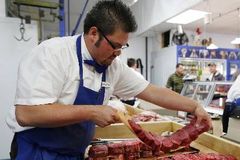