In Constance Beresford-Howe's most famous novel, The Book of Eve, published in 1973, the 65-year-old heroine tries to explain why she bolted from her long marriage to a demanding invalid husband: "You can't know what it's like to be invisible for years on end. … Never independent. Never free, even to use those four-letter words we all know, because the chief duty of females, we were taught, was to practise the restraints of civilization, not explore its possibilities."

Buoyed by the early wave of feminism, at a time when people were more easily shocked than they are today, she wrote lively novels about women at various stages of life, struggling to live unfettered, trying to discover who they really are once they throw off the restraints placed around them by husbands, fathers, society itself.

Her heavy use of dialogue in all her books made them highly readable, while her sense of irony and deft social comedy led to comparisons with the English writer Barbara Pym.

"She was such an independent spirit; under her quiet exterior, she was a doughty little person," said Pat Kennedy, her long-time editor at Macmillan of Canada, of Ms. Beresford-Howe, who stood barely five feet tall. "I remember once the American publisher wanted to change the spellings to U.S. spelling and she just dug her heels in and wouldn't have it.

"I think she is underrated because she was quiet and not flashy. She was very witty, and had a real eye for the moment. She disliked people who impinged on the independence of others."

Ms. Beresford-Howe died in a hospice in Bury St. Edmunds, Suffolk, England, on Jan. 20, at the age of 93. She had been suffering from an inoperable tumour blocking her digestive tract. She and her husband, Christopher Pressnell, had been residents of Britain for 25 years.

Of her 10 novels, only The Book of Eve has been continuously in print since it first appeared (others are available as e-books), and Eva, the senior citizen who reinvents herself and even finds a much younger lover, has joined Morag Gunn, Anne Shirley, and Del Jordan as one of the best-loved heroines in Canadian letters.

Ms. Kennedy said women approached the author at readings to say that she gave them courage to change their lives.

The book was published in Sweden, the United States, Argentina, Brazil, the Netherlands and Turkey. Adapted for the stage by Larry Fineberg, it was a hit at Stratford in 1976, with Jessica Tandy in the lead role. (Stratford's literary manager at the time, Urjo Kareda, reported that he overheard a man complain at intermission that he hadn't driven all the way from Michigan to hear Ms. Tandy say "shit" on stage.)

The 2002 film version altered the flavour of the book substantially. It starred Claire Bloom as Eva; another English rose, Susannah York, as her friend May; and Québécois heartthrob Daniel Lavoie as the lover, Johnny, changed into a Romanian instead of a Czech immigrant.

Constance Elizabeth Beresford-Howe was born Nov. 10, 1922, in Montreal, the first of two children of Russell and Marjorie (née Moore) Beresford-Howe. Her English-born father was area manager for an insurance company.

Young Constance grew up in the city's Notre Dame de Grâce (NDG) neighbourhood, where she had the advantage of her parents' library, stocked with classics her father had brought from England and 19th-century fiction her mother had acquired while working in a Toronto bookstore before her marriage. Laid up with rheumatic fever as a child, she passed her time reading and writing. By 13, she was attempting to write a novel set in the London slums.

Family life was stressful owing to financial worries, which only grew worse when her father was killed in a car accident while driving to the family's vacation house in Cacouna, on the south shore of the St. Lawrence, one weekend.

Her writing career got off to a running start at McGill University, where her stories were published for the first time, in the McGill Daily and the student magazine Forge. In 1945, she graduated with honours, winning the Shakespeare Medal for highest standing in English and the Peterson Prize for creative writing.

That year she also won the Dodd, Mead Intercollegiate Literary Fellowship (worth the then-lavish sum of $1,200) to complete her first novel, The Unreasoning Heart. The following year, the book was not only published by New York-based Dodd, Mead but appeared (condensed) in the now-defunct Redbook magazine – a heady experience for a 22-year-old writer.

Set in her own NDG neighbourhood, the somewhat melodramatic story concerns the interactions of a family of six, and Abbey, a 16-year-old orphaned girl, who goes to live with them. Abbey falls in love with Con, one of the adult sons – the one less favoured by his mother, but a better man than David, the mother's favourite.

"When I started to write, the literary life hardly existed," Ms. Beresford-Howe told this writer in 2002.

"Canada was a blank place on the literary map; Morley Callaghan and Hugh MacLennan were the two stars then. You had to have courage to set something in Winnipeg or Montreal."

She earned her master's at McGill, then moved to Brown University, on Rhode Island, on a provincial scholarship to work on her PhD, having decided on an academic and literary career. Her short fiction showed up in Saturday Night and Maclean's magazines and, in 1947, her second novel, Of this Day's Journey, appeared, praised by William Arthur Deacon of The Globe and Mail. Two other novels followed: The Invisible Gate (1949) and My Lady Greensleeves (1955), a historical novel, based on real events.

Having obtained her PhD in 1950, she was hired to teach English at McGill to servicemen returning from the Second World War and stayed on. Hugh MacLennan and Louis Dudek were among her colleagues and friends. She taught creative writing briefly at the University of British Columbia and wrote essays and book reviews for The Montrealer, but there were no novels for 18 years.

The Beresford-Howe family, in straitened circumstances after the father's death, decided to take a lodger into their NDG home, and that is how Constance met Christopher Pressnell, a Cambridge-educated French teacher eight years her junior, who needed a place to live. They married in 1960 and, in 1967, joyfully adopted 10-week-old Jeremy, their son, now a major in the Canadian Forces.

In 1969, distressed by the growing separatist movement in her home province, the couple moved to Toronto with their small child. In the two-year hiatus between teaching at McGill and starting a teaching job at Ryerson Polytechnic Institute (now Ryerson University), Ms. Beresford-Howe wrote The Book of Eve.

She told this reporter that the character of Eva was in part inspired by her mother, who had never left her father but should have. Another source for Eva was a 70-year-old woman named Edith, whom she and Mr. Pressnell met aboard ship while returning from England: "Edith was 70 at the time and had lived for years in England, but was a Canadian. She said to me, 'I have a male friend and he's Hungarian, and furthermore, it's not platonic.'"

The next two novels in what she considered to be her "Voices of Eve" trilogy were Population of One and The Marriage Bed, both dealing with the trials of women alone. The latter is the story of Anne Graham, a young mother of two with a third one on the way who is abandoned by her husband for another woman. In the end, she takes back her errant husband, who is clearly unworthy of her love.

The book was filmed for CBC television but it disappointed some of her readers for its affirmation of the maternal role. Andrea O'Reilly, who teaches in York University's faculty of gender and women's studies, wrote in the journal Canadian Women's Studies that Ms. Beresford-Howe "accepts if not glorifies the circumscriptions of the traditional mother/wife role in The Marriage Bed" and the book "bears traces of a conservative ideology."

She retired from Ryerson at age 65, after writing Night Studies about teachers at Simcoe College, a third-rate educational institution in downtown Toronto, who develop a closer relationship during a power failure. (She denied – unconvincingly – that Simcoe College was Ryerson.)

Two more novels rounded out her oeuvre. Prospero's Daughter (1988) is about a celebrated and highly theatrical Canadian author living in England who tries to engineer the marriage of his simple-minded daughter to a man she doesn't want, with disastrous results; A Serious Widow (1991) is the story of Rowena, a woman of 50, who discovers upon the death of her husband that he had another family in Ottawa. The book was a finalist for Ontario's Trillium award but lost out to Margaret Atwood's Wilderness Tips.

Her own marriage lasted 55 years and was ideally happy. "We never had a separation," said her husband, lest anyone should think her plots were autobiographical.

The couple had retired to England and found a house they loved in the picturesque Suffolk village of Lavenham; they travelled frequently in France and returned occasionally to Canada.

Tragically, Mr. Pressnell outlived his wife by only two weeks. He died in hospital on Thursday, when his heart stopped in the course of emergency surgery for a bowel obstruction.

Artur Fischer: Creator of the screw anchor was a prolific inventor
February 4, 2016 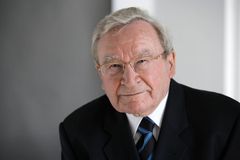