Two members of the Libération cell of the Front de libération du Québec knocked at his door, disguised as delivery men. Admitted to the house by a maid, they pulled their guns and kidnapped him.

By the time the crisis ended on Dec. 28, Quebec labour minister Pierre Laporte had also been kidnapped and then murdered, the national government of Pierre Trudeau had invoked the first peacetime use of the War Measures Act - suspending Canadians' civil liberties - and the army had been deployed in Ottawa and throughout Quebec.

Canadians watching their television screens saw every appearance of a country under martial law. Tanks were on the lawns of Parliament. Hundreds of union leaders, artists, scholars, students and other political activists in Quebec were rounded up by police, arrested and detained without charge. The mayor of Vancouver tried to employ the security regulations to clear the city's beaches of hippies.

Forty years later, the legacy of the October Crisis challenges the notion of who we think we are.

The steps taken under the aegis of the War Measures Act - overwhelmingly supported by both French- and English-speaking Canadians - remain a symbol of the country's fragile attachment to civil liberties and human rights, with echoes along the road from anti-terror legislation in the wake of 9/11 and the policing of the streets of Toronto during the G20 summit.

Despite the Charter of Rights and Freedoms being cherished as a symbol of national identity, it is the mantra of Canada's first Constitution of 1867 - "peace, order and good government" - that appears to trump all other mythologies of the country that Canadians want.

"They like peace and they like order," says Ramsay Cook, one of Canada's greatest historians. "I don't think this has ever been a country that had an enormous interest in civil rights."

The imposition of the War Measures Act indelibly stained the stature of Mr. Trudeau as a civil libertarian and advocate of democracy - even though it was done at the request of Quebec's premier Robert Bourassa and Montreal's mayor Jean Drapeau.

Recent scholarship by, among others, historian John English, author of an exhaustive two-volume Trudeau biography, has lent support to the former prime minister's declaration that he acted to deal with an apprehended insurrection. Yet his response of "Just watch me" to a CBC reporter who asked him how far he would go to defeat the FLQ was tied to him for the rest of his life, and ignited a still-ongoing debate over whether the act's application was justified.

But the FLQ crisis was hardly the first time in Canadian history that civil liberties have taken a beating; the impulse toward law and order is woven into the fabric of the country.

In the latter part of the 19th century, the Métis of the Prairies were starving, the buffalo herds on which they depended had been killed off, land promises had been reneged upon. Yet their resistance to government measures - which eventually led to the Northwest Rebellion - was met only by relentless demands from newspapers of the day that their defiance be crushed.

The Winnipeg General Strike of 1919 was ended by gunfire from police. The communism that took root among the unemployed of the Great Depression was criminalized. The federal government of Mackenzie King that invoked the War Measures Act at the beginning of the Second World War refused to allow Parliament to discuss its regulations - regulations harsher than measures under comparable legislation imposed by Britain, which was under direct enemy attack.

Following the cessation of hostilities, the courts upheld the government's decision to use the War Measures Act to deport Canadian citizens of Japanese descent.

Since the Charter of Rights and Freedoms became part of Canada's Constitution in 1982, the courts have strengthened police powers of arrest. We have human rights commissions in every jurisdiction in the country that with only a couple of exceptions - in Saskatchewan and Quebec - are pro-active in protecting Canadians against discrimination on the basis of race, gender and religion but not against individual violations of civil rights.

The Canadian Anti-Terrorism Act enacted in 2001 allowed for in-camera trials, pre-emptive detention and expanded security and surveillance powers. Anne McLellan, Canada's minister of public safety at the time, said in an interview that great care was taken to strike a careful balance between the government's primary obligation to protect Canadian society and its responsibility to uphold individual rights.

Civil libertarians strongly disagreed with her, and the courts have whittled away at some of her legislation's provisions, but they've done so without much support from Canadians.

A majority of Canadians - 58 per cent - told pollsters at the time Ms. McLellan's legislation was introduced that terrorism threats outweigh the protection of their individual rights and freedoms and the due process of law. Sixty per cent said they would give police the power to randomly stop and search either themselves or their vehicle. A small majority (53 per cent) even said that law-enforcement officials should be given the power to detain suspected terrorists indefinitely without specific charges.

Where does this thinking come from - if Canadians rate the Charter near the top of the list of things that symbolize their national identity, right up there with the majesty of the land and hockey?

Bruce Ryder, a constitutional legal scholar at Toronto's York University, looks for an answer in an older cultural theory of Canada. He sees in Canada's Tory traditions - brought north across the border by Loyalists after the American Revolutionary War - more concern for the well-being of society than for individual freedoms.

University of Ottawa legal scholar Craig Forcese, a specialist in national security law, says the Charter is now internalized as a social value in Canada. "We do talk more emphatically about rights and we take them more seriously [since the October Crisis] But Benjamin Berger of the University of Victoria's law school says having a Charter of Rights and Freedoms doesn't in itself guarantee a culture of civil liberties; that requires an engaged and active citizenry.

Late last month, the Ontario government announced that the province's former chief justice and a much-respected former attorney-general, Roy McMurtry, had been called in to look at a law that was twisted to allow police to misrepresent its provisions.

What Mr. McMurtry's mandate will be is a little vague. But on the weekend, he was going through a box of papers in his house and came across letters he wrote as a lawyer in private practice in November of 1970 to The Globe and Mail and to federal Conservative leader Robert Stanfield, decrying the invocation of the War Measures Act.

"The events of the past three weeks," he wrote, "have demonstrated how quickly a nation can forget the importance of its basic freedoms when it is confronted with a crisis and the often irrational emotions that result therefrom." (The letters are posted on The Globe's website.)

Mr. McMurtry does believe the Charter has changed the culture of civil liberties in Canada. He was asked if he would conduct his inquiry in the context of the Charter.

VIEWS OF THE CRISIS

Then the federal NDP leader, Tommy Douglas was a prominent and early opponent of the War Measures Act, which he called "overkill on a gargantuan scale."

From his speech in Parliament on Nov. 4, 1970, explaining why his party voted against the act: "I have no hesitation in saying that those of us who voted against that motion did so for two reasons: first, because we have not been given any evidence that there was a state of apprehended insurrection in this country and, second, because we could not approve the regulations enacted under the War Measures Act because they deprive Canadian citizens so extensively of basic civil liberties … as a member of Parliament standing in my place I have no right to restrict the liberties of 21 million Canadians without adequate proof."

The late Trudeau-era cabinet minister Eric Kierans wrote in his 2001 memoirs: "There was no secret knowledge that explained the imposition of war measures. Everything we were told in cabinet came from the streets outside.

"… None of the secret police raids turned up the guns, rifles, machine guns, bombs or dynamite, although they did sweep up Pauline Julien, who sang separatist songs. … It was Tommy Douglas of the NDP who stood in the House, day after day, and hammered the government for suspending civil liberties, and if you ask me today why I wasn't up there beside him I can only say, damned if I know. He showed political courage of the highest order."

In his book Here Be Dragons, Telling Tales of People, Power, Passion, Peter C. Newman wrote that Pierre Trudeau lied to him about a conspiracy to set up a provisional parallel government that would replace Robert Bourassa - only to discredit the story that Mr. Newman had been urged to write:

"I felt angry and cheated by Trudeau's revisionist version of events. I hadn't been in Ottawa for a dozen years without becoming inured to the fact that prime ministers lie. … Then the penny began to drop. If the prime minister could reverse himself so casually, then the entire scenario had been a meticulously concocted lie. … The only apprehended insurrection the PM had going for him was the puny parallel government rumour in my story, which was not an insurrection, nor had it been apprehended, since it never got started."

"The reality is that the RCMP never asked for the War Measures Act, were not consulted as to its usefulness, and would have opposed it if they had been asked their opinion.

"Two days before the invocation of the War Measures Act, a meeting of the Cabinet Committee on Security and Intelligence heard RCMP Commissioner William Higgitt suggest that the best course was to continue investigations 'as at present.' He added that a 'broad sweep and preventive detention of suspects' would be counterproductive, leading to 'massive problems.' " 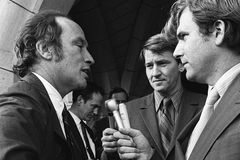 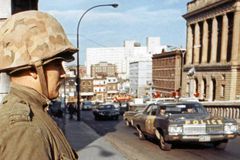