The government's response to the Attawapiskat housing crisis may well have underscored Stephen Harper's reputation for his hard line rather than his heart, with his focus on the aboriginal reserve's financial problems, not its social ones.

But in other parts of the country, the Prime Minister's government is also quietly bankrolling one of the largest social pilot projects ever seen in Canada, paying generously for cutting-edge research that is changing the lives of hundreds of homeless people.

The project may scream out for a new, national social program – the kind that has been anathema to Mr. Harper in the past.

But it is producing results that suggest federal involvement in funding homes for the homeless can be smart and save money.

The At Home/Chez Soi pilot project is now halfway through its five-year life span, backed by $110-million of federal money channelled through the Mental Health Commission of Canada.

It's the most comprehensive research experiment with homelessness in Canada, if not the world, researchers say. And it's working.

"We now have enough experience to know this can be done," says Paula Goering, lead researcher for the project.

The pilot project has its origins in the political dust-up of 2006. With Paul Martin's minority Liberal government on life support, NDP leader Jack Layton demanded billions in federal funding for housing and homelessness. The bargain eventually broke down, but left behind a mounting public concern that homelessness had been ignored for too long.

The government agreed to set up a program through the newly-minted Mental Health Commission. As is Mr. Harper's style, it was to be finely-targeted, one-time funding.

But top government officials, in touch with Ms. Goering and other researchers on the front lines, argued that homelessness was a growing scourge in every major city. And they saw a new approach in the parts of the United States that seemed to be producing results: dramatic reductions in homelessness, all while saving money on social services, and law enforcement.

The approach, known as "housing first," rejects the traditional method of trying to fix homeless people's underlying problems before guiding them towards affordable housing. Instead, the home comes first – heavily subsidized and with no strings attached. Then, a support team swoops in and bombards the homeless people with services of all kinds, if they want them.

The government was not about to embrace an experimental approach to the homeless wholesale. Instead, taking their cue from Mr. Harper, officials decided to zero in on a sub-group: the mentally ill.

Then they narrowed their focus further. In five cities across the country, they targeted a particularly vulnerable sector of the mentally ill homeless population. In Toronto, it was visible minorities.

At Home staff and partners in each city scour alleys and sidewalks for homeless people who fit the bill and funnel the willing into the program.

Out in suburban Scarborough, Elizabeth Bennett meticulously organized and hung up a few dozen sketches she has finished, and decorated her tiny new apartment for Christmas. Her Bible and a small backpack are never far from her side, even while relaxing in her home.

She has spent the past few years in and out of shelters and various lodgings, struggling to gain control of her schizophrenia and deal with a former landlord who threatened her family and wanted to "keep" her. Now, she has privacy, a strong support network, friends in the church nearby, and a sense of home.

"As long as I'm inside, I feel safe," she says. "I feel safe because of my prayer, and because of the security on the door."

A common criticism of the housing-first approach to homelessness is that it can't work in a tight housing market. Core to the idea is to give homeless people a choice in their home, so they can have some control over living conditions. But that's hard if there's not much rental housing available, says York University professor Stephen Gaetz, who heads the Canadian Homelessness Research Network.

The At Home clients come with ample support and funding attached, as well as a plan to prevent eviction. Often, they're less trouble than regular tenants, says Paula McDougall, the office manager at a building in a gritty part of north Toronto.

The At Home people pay their rent on time, she says, and they are coached on how to live in harmony with their neighbours. Ms. McDougall stays in touch with the case workers, and although she has no formal training in dealing with mental illness herself, she has had enough experience to know what to do if someone goes off their meds or causes trouble.

At Home has been able to place everyone approached so far. As of November, the program was fully subscribed, with 1,030 homeless people now in homes and a control group of 980 people.

"At any time, 70 to 80 per cent of the clients are doing really well," says Aseefa Sarang, executive director of Across Boundaries, a Toronto mental health organization that is heading up implementation of At Home in the city.

That's an astounding success rate for a problem that has been the bane of many a government policy. 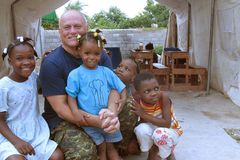