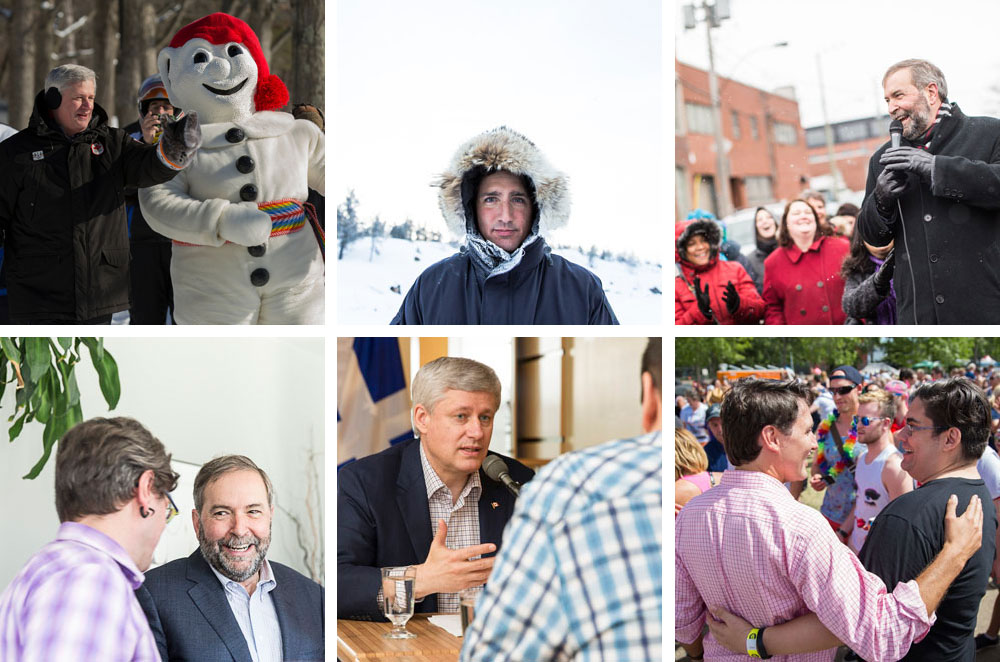 
From Harper’s handshake, Mulcair’s smile and Trudeau’s candids, the leaders’ official photo streams are used to promote their respective values and personalities, reports Daniel Leblanc. We asked an American expert with little knowledge of Canadian politics whose pictures cast Canada's main party leaders in the most flattering light

After looking at hundreds of official photos of Canada’s main political leaders, Michael Davis provided an objective take on what he’d seen. His expertise is clear – he went through one million pictures as the lead picture editor in the George W. Bush White House, and has worked for National Geographic and other media. As an American, he looked at the pictures of Canadian politicians uniquely with a photographer’s eye.

In the age of YouTube video and six-second clips on Vine, it seems surprising that photographs remain a key tool in a political party’s arsenal.

But all three main parties rely on dedicated photographers to capture their leaders interacting with Canadians, attending solemn ceremonies and, in most cases, smiling for the cameras.

The pictures are easy to distribute via social media, where a good shot can go viral. The Conservative Party, the NDP and the Liberals all manage Flickr and Instagram accounts to showcase pictures of, respectively, Stephen Harper, Thomas Mulcair and Justin Trudeau. Partisans and supporters can then share them through Facebook, Twitter and other digital tools, helping to shape each leader’s public image.

The shots will become even more precious during the summer as the three party leaders crisscross the country in a pre-electoral tour, attending mostly friendly gatherings in order to improve their standing in the public’s eye.

“There is great potential and great power in what photographs offer, in terms of conveying a sense of the values and the personality of a leader,” said Michael Davis, a photo editor who served in the White House during the George W. Bush presidency. 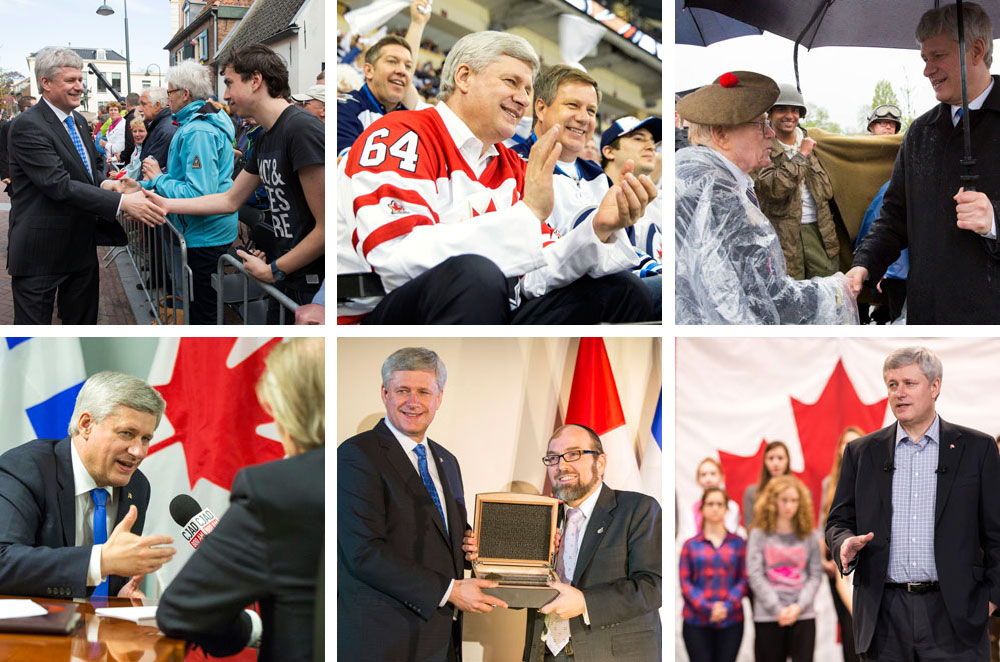 It’s very linear, very simplistic, not at all dynamic or deep. … It’s all very similar, it’s very distant, very removed from the person. It kind of represents him as an entity who does official things, and that’s about all you get. … These are just official records of events.

Compositionally, there is not much range, very little moment value in the imagery. … One gauge of dimension and dynamic in photography is how much the head sizes vary in the imagery, and they almost never do in the Prime Minister’s photographs. That means they are trying to do the same thing with every image.

“Back in the day, we took pictures for the history books,” said Peter Bregg, who was one of Brian Mulroney’s official photographers. “Now the Internet has given [the political parties] a canvas for all of these pictures.”

To this day, the Prime Minister has the biggest budget of the three party leaders, with a “photography unit” in his office, and the Conservative Party picking up additional costs. The chief photographer is Jason Ransom, while his wife, Deb, is listed as one of two other official photographers.

With his official duties, Mr. Harper has the most serious collection of pictures: meeting world leaders, attending military ceremonies and a series of standard shots of him at a podium during various political announcements. But there is also a lighter side to the galleries, including a series of cat pictures (his wife, Laureen, is a big lover of felines) and Mr. Harper enjoying some of the perks of his office, such as attending hockey games or kicking it up with Bonhomme Carnaval. 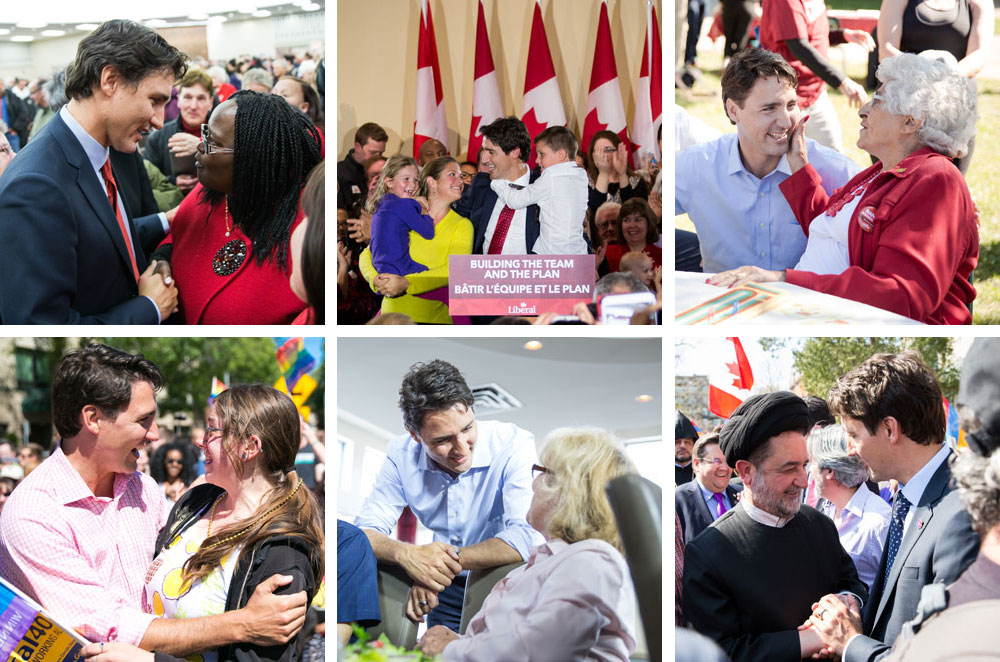 There is a much greater sense of photographic quality, greater moment value, you sense what he is like behind the scenes and in public.

There is a beautiful quality of light in the photographs. It’s using all of the components of the imagery to say something, and not just show something.

He’s willing to be openly perceived as he is, not as he is crafted. … It suggests he is much more open to being photographed. As a consequence, he comes across as a much more sincere, caring candidate and human.

The pair developed a close relationship over the years, with Mr. Scotti being part of the close circle of staffers who are almost always on the road with Mr. Trudeau, or inside his home taking family pictures. Mr. Scotti has authored a number of pictures that have been widely circulated on social media, including one of Mr. Trudeau dancing with his wife, Sophie Grégoire, and another of Mr. Trudeau helping someone in a wheelchair go up a set of stairs.

Mr. Scotti is mainly paid out of Mr. Trudeau’s parliamentary budget, but also receives remuneration from the Liberal Party, as his pictures are often used by the party and candidates across the country.

The NDP long had a less disciplined approach to the task of shooting Mr. Mulcair, with the party relying on freelancers spread out across Canada. The results varied from event to event, with the NDP posting at times pictures of Mr. Mulcair that looked fresh out of a community newspaper.

Still, the party has upped its game of late, now showcasing a steady flow of pictures of the NDP Leader wearing a constant smile. Paid entirely by the NDP (and not the party’s parliamentary budget), Jenna Marie Wakani still has other clients, but she now travels extensively with Mr. Mulcair, who is seeking to increase his public profile. 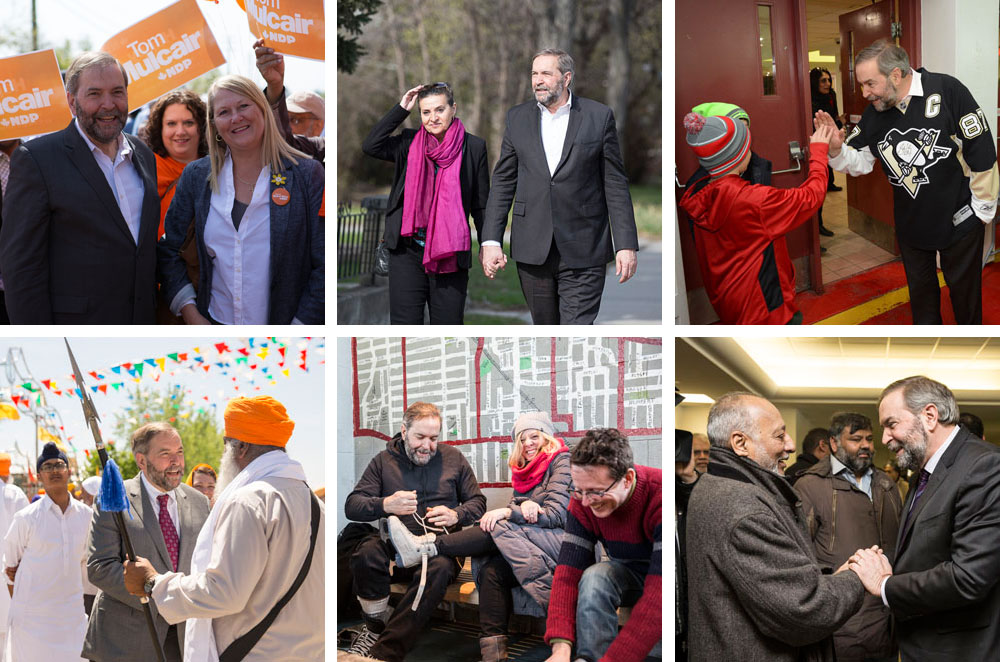 His expression almost never changes. Holy cow, he is constantly offering a one-note expression. … The sense you get here is that this isn’t at all accurate.

Some of them have direct flash, he’s just standing there with people. He is dead centre, there is nothing happening, no moment value.

Eye contact in photographs is a powerful thing. There is a big difference when you are looking at someone, as opposed to not looking at someone. There are far fewer eye-contact images in [Mr. Mulcair’s gallery] compared with Mr. Trudeau.

The three parties’ pictures are designed in part to bypass traditional media – although they don’t mind when their pictures end up in newspapers, either. In one case, Mr. Scotti’s picture of Mr. Trudeau meeting with a would-be Liberal candidate, Adam Vaughn, was used in a major Toronto newspaper to illustrate the behind-the-scenes wooing of the former city councillor.

In all cases, the pictures are designed to cast their subject in the most flattering light, with the parties exercising clear control over what is published. Mr. Davis, who now works at Syracuse University, said pictures can be used by a party to shape the public perception of their respective leader.

“You can extrapolate things from the imagery,” he said. “If you are presented as a more open and personable person in the photographs, one can assume that those are real qualities.”