It's a tight federal election with a late challenger when it comes to the voters' attention: Major League Baseball.

With much of Canada gripped by Blue Jays fever in the closing stages of an election campaign, the ultimate test comes on voting day.

Game 3 of the American League Championship Series between the Toronto Blue Jays and the Kansas City Royals – a series that will decide which team goes to the World Series – is scheduled for Monday, Oct. 19, with the first pitch just after 8 p.m. ET at the Rogers Centre in Toronto.

That is also when thousands of Canadians will be lining up to vote, or settling in to watch the election-night coverage, creating a very Canadian predicament: how to fulfill one's civic duty and stay on top of the outcome of the vote while keeping up with the baseball score.

Doing both – waiting to vote at a polling station while cheering the Blue Jays – is not that far-fetched.

Elections Canada has clear rules on the use of electronic devices in polling stations.

First off, smartphones are permitted in the polling station. The Elections Canada website states that such devices can be used for retrieving and showing an electronic bill or invoice that proves one's address and identity. There are also provisions for voters with disabilities to use a smartphone to read their ballot.

Following the baseball game on social media – or watching it live by logging in to a cable subscription on the smartphone – are not among the mentioned smartphone uses outlined by Elections Canada.

But that doesn't mean they are against the rules.

In an interview, Elections Canada clarified that bringing an electronic device like a portable radio or a smartphone into the polling station and using it to listen to a sporting event or to watch a live baseball game is allowed as long as voters are discreet about it and they preserve the peace of the voting site.

"So somebody that would be just listening to this and would be minding their own way, that's not a problem, as long as there's respect of the voting process and it's not being a distraction," Elections Canada spokeswoman Nathalie de Montigny said.

"And, of course, no selfies," she added, explaining that Elections Canada regulations do not allow photographs or audio and visual recordings inside the polling station because they impinge on the privacy of voters and the secrecy of each person's vote.

Major League Baseball announced its 2015 postseason schedule in August. The scheduling of Game 3 of the American League Championship Series on federal election day would have gone largely unnoticed because the Blue Jays were still in the hunt for a playoff spot. The ALCS is a best-of-seven round, guaranteeing that there will be a Game 4, and possibly more Jays games to take in.

But, for some baseball enthusiasts, every game is going to be a must-watch, including Game 3 on election day.

Voting ahead of election day – and guaranteeing that no baseball action is missed – is no longer an option.

The deadline for voting by mail has long passed, and four days of advance voting took place over the Thanksgiving weekend – with 3.6 million Canadians going to their local polling station to cast their ballots. That's a 71-per-cent increase in advance voting compared with turnout for the 2011 election. Many of those voters can kick up their feet on Monday and flip between election coverage and baseball.

For those who missed the advance polling days, voting early on election day – and before game time – is still possible.

Every Canadian employer is required by law to give employees three consecutive hours to vote without loss of pay, or face a maximum penalty of a $2,000 fine and three months in jail. There are some exemptions for transportation-industry employers, and ultimately the timing of when workers are permitted to vote is up to the employer..

Many Canadians do not take up the option of voting during their workday, and that means they will end up at their polling station around the time the Blue Jays will be on the field. That is when a fully charged-up smartphone will come in handy.

There is also the question of voter turnout, and whether some fans may sit this election out.

Earlier this year, Alberta's provincial election took place on the same day that the Calgary Flames played the Anaheim Ducks in Game 3 of their playoff series. The Flames won in overtime, but later lost the series.

The voter turnout was close to 59 per cent – the highest Alberta has seen in more than two decades.

To find out when polls close in your area, check out our voting day guide.

Opinion
We asked Canada's federal leaders: What makes you best-suited to run our country?
October 15, 2015
When do the polls open in the Canadian election? And other voting-day questions answered
October 14, 2015 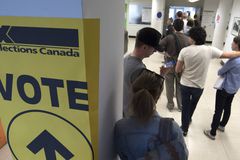 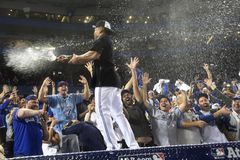