It was a cute thought, but I never took him up on it. Better just to try to come up with good answers to all those pesky questions.

But in the last days of this long election campaign, there is another idea of "un-Canadianness" that is getting a worrisome amount of attention. This is the idea that there are two kinds of Canadians. Those who are, well, real Canadians. Just like us. Old stock. And those who are not.

And so it is being argued by Stephen Harper's Conservatives that real Canadians would not seek to hide their faces in public places. And that what this country urgently needs is some sort of tip line so real Canadians can report the "barbaric" cultural practices of our un-Canadian neighbours to the authorities.

And that there are two classes of citizens: some whose citizenship can be removed for certain offences, and others who, being real Canadians, might go to jail for their crimes but will always be citizens.

It is as if the one thing Canada needs most urgently is not viable policies to remedy a persistently flagging economy, address the looming crisis of climate change, or restore Canada's position of credibility in world affairs, but rather, a legislated dress code for citizenship ceremonies.

But it is much worse than that.

There is a principle that is truly fundamental to our country. It is that we do not simply tolerate difference, we celebrate it.

We do not impose the values of one religion on all; instead, we respect religious freedom. This protection is written into our Charter of Rights and Freedoms, the document that, more than any other, is the expression of our deepest values as a nation.

Hardwired into our nation's system of government is the idea that we are not a seamless, homogeneous whole. We are instead a patchwork, a mosaic, a tapestry of different beliefs, customs and practices. The idea is that these differences should not divide us, but rather unite us, within a constitutional framework that guarantees basic rights to all while fundamentally respecting – as liberal democracies must – our individual right to live our lives autonomously, freely.

This must surely include the possibility that some will hold religious beliefs that call them to modesty in public, even to the extent of veiling their faces. There is, in fact, no difference between the Scottish-born immigrant who wants to wear his kilt to his Canadian citizenship ceremony, and the Muslim immigrant who wants to veil her face. Both want to become Canadian, to obtain full membership in a society that will not scorn their difference, but rather embrace it.

There are some who think otherwise. Plainly, some of Mr. Harper's Conservatives are in that group. But we have seen these people before. People who advocate for the creation of tip lines to rat on the behaviour of our neighbours are not much different from Joseph McCarthy and his House Un-American Activities Committee. Theirs is the politics of intolerance, fear and division. Today, we will be given the opportunity to phone the tip line. Tomorrow we will be required to do so.

Some will say that this is simply a political strategy. A late campaign attempt by the Conservatives to exploit so-called wedge issues intended to scare us into voting for them.

The problem, however, is this. If we reward them now for their intolerance, we can expect more of it.

There are important issues in this election campaign. The parties differ markedly on some, and not on others. We can choose among different approaches to economic growth, environment protection, refugee policy, parliamentary reform. It may be hard to see the differences sometimes through the noise of partisan rancour. But it's an election, not a tea party.

All except for this. The notion that what this country needs now is a politics that punishes cultural and religious difference, that classifies us into different categories of citizens, is profoundly wrong. It is, in fact, un-Canadian. We must reject it. 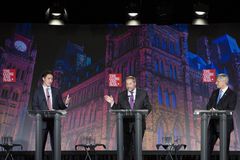