Rahim Jaffer's appearance before a Commons committee last week may not be his last.

Opposition MPs said Sunday that the former Conservative MP should be called back to explain why he and his business partner, Patrick Glémaud, told the government operations committee that they had never lobbied the government or been paid to do so - denials that appear to have been contradicted by three cabinet ministers.

Pat Martin, a New Democrat MP, told CTV's Question Period that Mr. Jaffer will have to return to the committee to tell federal politicians why he said his conversations with former colleagues in the Conservative caucus were limited to social banter.

"I think there has to be consequences if you willingly mislead or, slash, lie to a parliamentary committee. We can't take that lightly," Mr. Martin said.

Environment Minister Jim Prentice told the House of Commons on Friday he had learned the previous Tuesday that Mr. Jaffer had made representations to a senior ministerial aide on behalf of someone else's company.

And Gary Goodyear, the minister responsible for economic development in Southern Ontario, said Mr. Glémaud approached his office regarding three other projects.

Neither Mr. Glémaud nor Mr. Jaffer are registered as lobbyists with the federal Lobbyists Commissioner.

Liberal MP Siobhan Coady said she is upset that Mr. Prentice waited until Friday to divulge the information about the contact between Mr. Jaffer and his staff member.

"Why didn't Mr. Prentice give us this information on Tuesday before committee so that we could have asked Mr. Jaffer very pointed questions on this issue on Wednesday," Ms. Coady asked in an interview with The Globe and Mail.

On Wednesday of this week, the committee will hear from Nazim Gillani, a Toronto-area financier with whom Mr. Jaffer was working to help get grants and public funds for green technologies. Ms. Coady said the committee will likely want to talk to the companies for whom Mr. Jaffer and Mr. Glémaud were working. "Maybe we'll have to ask Mr. Prentice to appear," she said.

Liberal MP Frank Valeriote wrote to Karen Shepherd, the Commissioner of Lobbying, last Friday asking her to verify that Mr. Goodyear had reported the matter to her office. He also asked for information related to the status of any investigation she is conducting.

That drew an angry letter from Conservative MP Kelly Block. The Lobbying Act, wrote Ms. Block, "requires the Commissioner to conduct any investigations in private and not to disclose information that comes to her knowledge during the course of performing her duties."

But Ms. Coady said Mr. Valeriote was not asking the Commissioner to overstep her authority. "We're not asking her to release documents or give us any information."

During his testimony before the committee, Mr. Jaffer offered a tearful apology to his wife, Helena Guergis, who lost her cabinet post as minister of state for the status of women and was kicked out of the Conservative caucus as revelations about his business dealings were made public.

A private investigator says Mr. Gillani claims to have opened offshore accounts for Ms. Guergis and Mr. Jaffer. And Ms. Guergis sent a letter to Simcoe County on Sept. 9 "to encourage" officials to consider the BioDryer waste-disposal system at about the same time her husband's company was seeking money from the federal government for the same technology.

Ms. Guergis has stayed out of the public eye since the scandal broke. But she turned up Saturday at the annual general meeting in her Conservative riding association in New Lowell, Ont.

"It's really not appropriate for me to be answering, I know, the many questions that you do have," she said as she left the meeting. "I am anxious to answer those questions, but I will not be doing that right now." 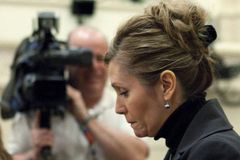 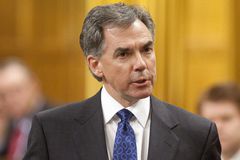 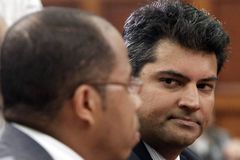 Jaffer's company sought federal funds at same time Guergis promoted project, documents show
April 23, 2010
Follow Gloria Galloway on Twitter @glorgal
Report an error Editorial code of conduct
Due to technical reasons, we have temporarily removed commenting from our articles. We hope to have this fixed soon. Thank you for your patience. If you are looking to give feedback on our new site, please send it along to feedback@globeandmail.com. If you want to write a letter to the editor, please forward to letters@globeandmail.com.
Comments