Alison Redford's controversial budget has passed, with opposition parties complaining the government fast-tracked proceedings to limit debate on the bill.

The budget was tabled March 7, and contains many of the provisions causing trouble for Ms. Redford, whose poll numbers have slid in recent months. The budget wasn't balanced, as had been promised, and cut university funding dramatically while setting out a plan for the province to take on billions in new debt.

After a series of small debates on each departmental plan over recent weeks, formal debate on the overall budget itself was sped through this week before it passed third and final reading Thursday.

The budget is expected to receive royal assent on Monday.

"That's an important milestone for us," Ms. Redford's house leader, Dave Hancock, said. "It's been a long and thorough process, it's an important budget, and it'll be important to get that piece of work done so we can go on with the rest of the business in the session."

Ms. Redford took to Twitter to applaud the passing of the budget, saying it "made difficult but necessary decisions to put [government] finances on stronger footing."

Budget bills go through a series of mini-debates, known as estimates, where spending plans are occasionally tweaked before a final bill is tabled. Known as Bill 20 or the Appropriations Act, this year's final bill was quickly brought through its required three readings before passing. Critics, though, said the government skirted parliamentary custom by shortening debate on Bill 20, which includes $43-billion in operational and infrastructure spending in the coming year.

"We shouldn't be limiting it to a couple hours of debate. That's not right," said Rob Anderson, house leader for the Official Opposition Wildrose Party.

Mr. Hancock rejected that, saying the changes to the estimates procedure – giving bigger ministries more time for debate – added 16 hours of debate, totaling 70 hours, or 30 per cent more than last year. It left opposition parties plenty of time to debate the budget, but government had to move on to other business, he said. "They have no legitimate complaint on that account at all," Mr. Hancock said.

"What they did in shutting down debate is evil and vile, and there's no other way I can describe it," Ms. Blakeman said, later adding with a smile: "I sentence them to an eternity of committee meetings for that."

NDP leader Brian Mason said Mr. Hancock "built in" closure on the standing orders to speed the budget through. "They're gaming that rule that they put in themselves, by taking [the budget] off while the clock still keeps ticking and bringing it [for debate] back just before the vote," he said.

The debate is largely moot – Ms. Redford has a majority, and can push through any bill she pleases. However, Mr. Mason argued that limiting debate on the budget – the foremost bill of the year – "disenfranchises" opposition MLAs. "One of the foundations of our parliamentary democracy is the right of the assembly, representing the people, to approve government expenditures," he said.

The budget held overall spending flat, a de facto cut in the fast-growing province. It has triggered some layoffs and salary freezes, with many post-secondary institutions – who were hit the hardest – claiming they were blindsided by deep cuts after earlier being promised modest increases in funding. In particular, the mayors of Calgary and Edmonton have spoken out against the university cuts as short-sighted.

Alberta, like most provinces, continues to struggle to meet demand for higher health funding. While overall spending was flat-lined, the health budget went up 3 per cent, which was still less than had been expected. That still nudged health spending to 45 per cent of total provincial expenses, with Health Minister Fred Horne warning all provinces need to do more to slow the growth of those costs.

This is Ms. Redford's second budget as premier, and first since winning last year's spring election campaign. Her first budget was dismissed by Wildrose as an "Alison in Wonderland" document that took a rosy view of revenues and an incoming bitumen windfall from the oil sands. This year's budget subsequently backtracked on many of Ms. Redford's promises due to what she has called an unforeseen drop in energy revenues, particularly due to a falling price paid for the province's bitumen. Ms. Redford has cited this downturn in advocating for pipelines, such as the Keystone XL project.

This budget was the first to be split into an operational plan, a savings plan and a capital plan. Ms. Redford argued that was a smarter way to show the books, more in line with the private sector, while some have complained it complicated things and obscured the true deficit, which is about $2-billion.

Alberta's MLAs adjourned Thursday evening and are set to resume sitting on May 6, and are scheduled to depart for summer break no later than June 6. 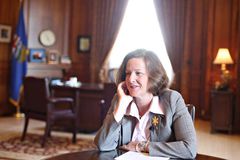 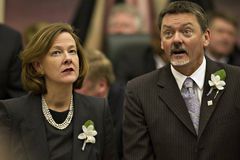 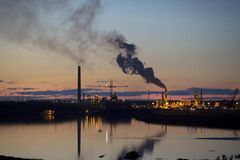 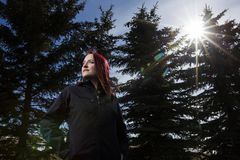 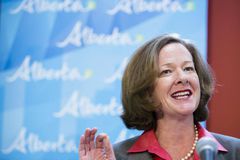 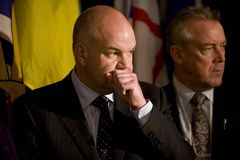 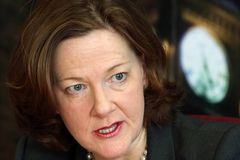 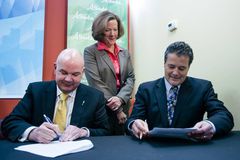