Alberta's freshly minted premier is breaking a mould set over decades by her predecessors – cozying up to Central Canada, looking beyond her province's borders and pushing for a national energy strategy.

Alison Redford met with Ontario Premier Dalton McGuinty and addressed the Economic Club of Canada on Wednesday, pushing for an energy strategy that pulls together Alberta's oil sands, the hydro power of British Columbia, offshore oil in the Atlantic and Mr. McGuinty's green energy agenda.

The moves signal a warming of ties between the two provinces, long at odds. Ms. Redford, meanwhile, is emerging after six weeks on the job as a premier anxious to shape the national agenda from a province whose leaders, she acknowledges, have often taken a more insular path.

"It's not the way I've ever thought," she said. "I see this as one big country with an awful lot of Canadians that have an interest in what our economic future will be."

Proponents of a national energy strategy hope to position Canada as an energy superpower by cutting red tape and enabling it to seek new export markets. Such a move might, for instance, help smooth the way to build bitumen pipelines from Alberta to the West Coast, a key initiative of Ms. Redford's administration.

She is in the middle of a trip designed largely to pitch the virtues of Alberta's oil sands, even as the White House delayed the proposed $7-billion Keystone XL pipeline from Canada to Texas. Ms. Redford thanked Ontario for its early investment in the sector. She believes a national strategy can advance the interests of fossil fuel production and green energy alike.

"We are a mosaic of people, regions and interests and we have always celebrated this diversity," she said. "Energy should be no different."

Ms. Redford's meet-and-greet tour began in Washington and New York and will continue Thursday when she meets with Prime Minister Stephen Harper in Ottawa. There are signs, too, of an improved relationship with Ottawa – the federal government on Wednesday announced $122-million in funding for a new Royal Alberta Museum in Edmonton after backing out of the project just weeks ago.

It was, however, the meeting with Mr. McGuinty, a Liberal, that may be most significant nationally, particularly as the provinces prepare for negotiations with Ottawa on a new health accord.

Any alliance between wealthy Alberta and Ontario, Canada's most populous province, would be formidable as both seek a higher share of health transfers than they received in the last deal. Ms. Redford and Mr. McGuinty also pledged to pursue academic exchanges and technical partnerships in their energy sectors. It's all a change of pace for Mr. McGuinty, who has often had difficulty finding common ground with his colleagues in the West.

An official in Mr. McGuinty's office said there is a "nice rapport" between the two leaders. A source in the office of Ms. Redford, who is a red Tory conservative, boasted Alberta already has a better relationship with Ontario than it did under predecessors Ed Stelmach and Ralph Klein.

"We're going out there, listening to what they say and we're taking a real partnership-style approach," the source said, adding closer ties with Mr. McGuinty do not mean a diminished relationship with Saskatchewan Premier Brad Wall or British Columbia Premier Christy Clark. "It's not a zero-sum game."

Mr. Wall worked closely with Mr. Stelmach and Gordon Campbell, Ms. Clark's predecessor. Saskatchewan doesn't see that alliance changing with Ms. Redford and Ms. Clark (neither of whom have won a general election as party leader). "We believe the West will continue to lead Canada's economy, so ensuring this relationship remains strong is important," said Kathy Young, a spokeswoman for Mr. Wall.

Ms. Redford is still aggressively pushing Alberta's interests behind closed doors, said David Taras, a political scientist at Calgary's Mount Royal University. "The old game in federal-provincial politics is: 'You scratch my back or I'll scratch your face,'" he said. Publicly, though, she's reaching out like few recent Alberta premiers have.

"There's a lot on the table that's going to affect Alberta," Prof. Taras said. "She knows the importance of bridge-building and having allies. But this is her entry to the stage and she's someone who sees the long run."

Try as she might, Redford still knee deep in oil 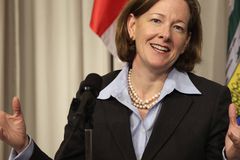 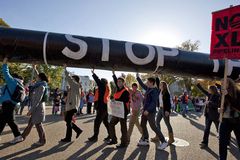 Opinion
The Keystone victory that wasn't

How a pipeline was defeated: actors, activists and one key conversation 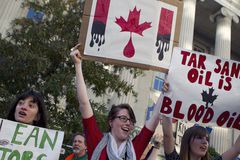 Follow Karen Howlett and Josh Wingrove on Twitter @kahowlett @josh_wingrove
Report an error Editorial code of conduct
Due to technical reasons, we have temporarily removed commenting from our articles. We hope to have this fixed soon. Thank you for your patience. If you are looking to give feedback on our new site, please send it along to feedback@globeandmail.com. If you want to write a letter to the editor, please forward to letters@globeandmail.com.
Comments