Alleged Nazi war criminal Vladimir Katriuk, a beekeeper of Ukrainian ancestry who lived in Quebec for more than 60 years, has died just as Moscow was preparing a criminal case against him in an effort to embarrass Canada.

Mr. Katriuk, 93, died last week, his lawyer said. He most recently lived south of Montreal near the U.S. border where he raised bees.

"Mr. Katriuk has passed away, after years of unwarranted harassment, media not excepted," Orest Rudzik told The Globe and Mail. Mr. Rudzik served as legal counsel to Mr. Katriuk over the years.

Relations between Vladimir Putin's Russian government and Canada are frosty today over Ottawa's strong and vocal opposition to Moscow's aggression in Ukraine. Canada has suspended all but low-level diplomatic relations with Russia and Moscow's leadership has told Prime Minister Stephen Harper to butt out of Ukraine, the ancestral homeland of more than one million Canadians.

Mr. Katriuk was set to become a pawn in Canada-Russia relations. On May 8, the Investigative Committee of the Russian Federation, a law-enforcement body that reports only to Mr. Putin, called on Canada to deliver Mr. Katriuk to Moscow so he can be tried for alleged war crimes.

The Harper government responded by ignoring the request and saying it will never recognize Moscow's annexation of Crimea and its interference in Ukraine.

Jewish groups have long urged the deportation of Mr. Katriuk, a former member of a Ukrainian battalion of the Waffen SS, the elite Nazi troops, and they increased their demands for action in recent years after new scholarly research that appears to tie Mr. Katriuk to a 1943 massacre of villagers in Belarus, a former Soviet republic.

In 1999, the Federal Court ruled that Mr. Katriuk obtained Canadian citizenship under false pretenses by not telling authorities about his collaboration with the Nazis but could find no evidence he committed atrocities. In 2007, the Harper cabinet decided not to revoke his citizenship.

Mr. Rudzik said his former client was the victim of unfair persecution.

Earlier Thursday, the Centre for Israel and Jewish Affairs, which did not know of Mr. Katriuk's death, urged Ottawa to take action on the Nazi collaborator.

"There have been recent reports that the Russian Federation has requested that Canada extradite Vladimir Katriuk, a Quebec resident originally from Ukraine, to be tried for war crimes he allegedly committed while serving in the Waffen SS during the Second World War," Shimon Koffler Fogel, CEO of the Centre for Israel and Jewish Affairs, said.

"While we are supportive of Canada's position on the integrity of Ukraine and the need to oppose challenges to Ukraine's sovereignty, this must be separated out from the imperative to ensure justice is served with respect to Nazi atrocities perpetrated against Jews and others during WWII. We call on the Government of Canada to review this case and take the necessary steps to ensure that, if guilty, Katriuk be held accountable for war crimes committed in collaboration with the Nazi regime."

The Ukrainian Canadian Congress, a lobby group with significant influence in the Prime Minister's Office, has urged Ottawa to ignore Russia's demands.

In a statement provided to The Globe and Mail earlier this month, the Ukrainian Canadian Congress (UCC) called for Mr. Katriuk to be left alone.

"The Federal Court of Canada in 1999 found no evidence that Mr. Katriuk participated in war crimes or atrocities against the civilian population" during the Second World War," UCC executive director Taras Zalusky said in a statement.

"Canada's cabinet refused to strip Mr. Katriuk of Canadian citizenship for those same reasons," he said.

Mr. Zalusky called Moscow's investigation "an obvious attempt to distract attention away from Russia's illegal annexation of Crimea, invasion of and war against Ukraine, and sow discord among ethnic communities in Canada."

In 2012, the Harper government pledged to re-examine the Katriuk case but nothing came of it. 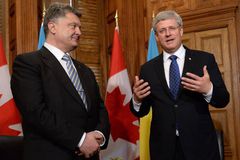 Chrétien pushing for Russia to send representative to dignitaries' meeting
May 19, 2015 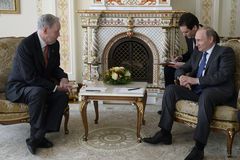 Nicholson keen to hear Kerry on his meeting with Putin in Russia
May 12, 2015 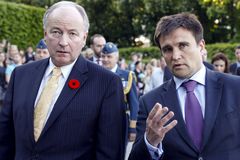 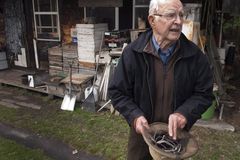 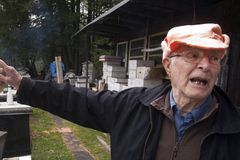