Taking a break from March Madness, America's annual obsession with college basketball, Kelly and Joe Craft flew into Dallas to see the NBA's Toronto Raptors play a Monday night game against the Mavericks.

Ms. Craft has known Raptors coach Dwane Casey since they were both students at the University of Kentucky in the 1970s and Mr. Craft's grandson was eager to meet the Raptors' star shooting guard, DeMar DeRozan. The special trip was organized to mark his13th birthday.

A Republican fundraising power couple whose lives revolve around hoops, education and Republican politics is preparing to represent the United States in Canada's capital. The Globe and Mail first reported in February that Ms. Craft was under serious consideration by U.S. President Donald Trump. But it was not until Wednesday evening that the White House made it official.

The appointment must still be approved by Congress through a confirmation process, meaning it is not entirely clear how much longer the U.S. Embassy in Ottawa will continue to operate without a permanent ambassador. Former ambassador Bruce Heyman, a Democratic fundraiser, stepped down in January.

The ambassador position will be an important link between the two governments as they embark on a renegotiation of the North American free-trade agreement, which is expected to begin this summer. Prime Minister Justin Trudeau's senior staff and Canada's Ambassador to Washington, David MacNaughton, have already established direct links with Mr. Trump's senior advisers in the White House. Cabinet ministers and provincial officials have also been making frequent trips south in the hope of preventing radical policy changes that would hurt the Canadian economy.

Ms. Craft has close and long-standing relationships with Vice-President Mike Pence and senior Republican members of Congress, people who will also play a key role in any policy changes that affect cross-border trade.

The Crafts are known as well-connected fundraisers who have raised millions for Republican politicians and the University of Kentucky. Ms. Craft also has a long history of organizing and fundraising for numerous charities.

In 2015, they donated $4-million (U.S.) to Kentucky's Morehead University to launch the Craft Academy for Excellence in Science and Mathematics, a two-year program that offers free tuition and housing for gifted students in their final two years of high school to study at the university.

They are passionate fans of the Kentucky men's basketball program, a perennially star-studded team that practises in a state-of-the art athletic facility named after Joe Craft.

"Both of them are very beautiful people, giving people, down to earth. There's no pretense about either one of them," said the Raptors' Mr. Casey, who supports the appointment even though he has been a vocal critic of Mr. Trump and his policies.

Ms. Craft grew up in the small town of Glasgow, Ky. – population 14,339 – and ran a marketing and consulting company in Lexington, Ky., where she raised two children from a previous marriage. She was appointed in 2007 by then-president George W. Bush as an alternate delegate to the United Nations general assembly, a short-term assignment that included speaking at the assembly about American support for Africa.

In a 2007 interview with the Glasgow Daily Times, she said she hoped to focus on children's issues and "social, humanitarian and cultural issues" while at the UN.

Zalmay Khalilzad, who was the U.S. ambassador to the UN when Ms. Craft was there, describes her as smart, politically connected and a quick study. Mr. Khalilzad notes that in an era where communication is easy and travel is cheap, officials can be in regular contact with their counterparts in other countries. As a result, ambassadors are not the key link between countries that they once were.

"The role of the ambassador is important, but different. Not as decisive as in the past," he said. "This is an issue that all ambassadors, especially in Western countries, representing the United States have … She will have an important role nevertheless, but there will be this complexity."

Ms. Craft has made few public comments over the years but she took on a higher profile in politics after entering into a relationship with Joe Craft, to whom she is now married. Mr. Craft is the billionaire president of Alliance Resource Partners, the second-largest coal producer in the eastern United States.

Mr. Trump campaigned on a pledge to bring back jobs in the American coal sector. That puts the United States at odds with the priorities of Canada's Liberal government, which is encouraging provinces to phase out the use of coal as part of a national climate-change plan.

The couple served as the Kentucky state finance chairs for Republican Mitt Romney's unsuccessful presidential campaign in 2012. They have supported other prominent Republicans over the years, including Vice-President Pence, Senate Majority Leader Mitch McConnell – who is from Kentucky – and House Speaker Paul Ryan. During last year's presidential campaign, the couple announced they would be supporting the Trump campaign after receiving assurances that he would not aim to replace Mr. McConnell or Mr. Ryan.

The couple is also close with Kentucky Governor Matt Bevin, a Republican who won in 2015 by campaigning as an establishment outsider in a way that has drawn comparisons with Mr. Trump. They co-chaired the inauguration committee in 2015 following Mr. Bevin's election victory.

In an interview, Mr. Bevin said the Crafts understand the importance of global trade and are good at bringing people together, two factors that will benefit both countries.

"She'll be a phenomenal ambassador," Mr. Bevin said in an interview. "She's somebody who moves in circles where people have global businesses and understand the need for these types of cross-border relationships. She gets it. She understands it. It's a world she lives in. She understands the significance of making sure that that is still possible. So I think she'll be an ally for both of us, because frankly all our interests are aligned."

Mr. Bevin said strong relationships have developed in recent months between state governors and provincial officials and he does not expect problems between the two countries over trade even as changes are proposed to NAFTA.

"I don't think it's going to be that big of a deal. You're our biggest trading partner by far," he said. "I'm not even a little bit worried that this will end up in some kind of a dispute."

The ability to take on large projects such as an inauguration or fundraising and complete them well is frequently cited as one of Ms. Craft's strengths, according to those who know her.

"Kelly's got a reputation for taking on big assignments and getting them done," said Jim Gray, the mayor of Lexington, a Democrat who grew up in the same town as Ms. Craft and went to the same church. "I would say that everything she decides to do, she does it with precision and skill and passion and commitment and she's a very quick study."

Mr. Gray said the Crafts are Republicans who will work across party lines.

University of Kentucky men's basketball coach John Calipari, who has an office in the Joe Craft Centre on campus and has accompanied the couple as they interacted with politicians in Washington, said the new ambassador has strong connections with decision-makers.

"The relationship with the United States and Canada – we know the importance of it. That person has to have the ear of the leadership in our government, and she does," he said in an interview. "If she calls, they're going to pick up that phone call. I also think that the people of Canada will enjoy who she is, what's she's about. You want somebody that has some presence, and she does." 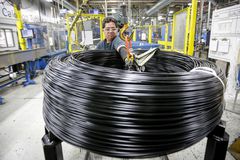