In a wide-ranging interview with The Globe and Mail, Mr. Scheer said he won't reopen contentious social issues such as abortion, but MPs are free to hold a variety of personal beliefs.

Mr. Scheer suggested Mr. Trudeau – who requires all of his MPs to support a woman's right to choose in any vote on abortion – has his own "values test" for MPs. The Conservative leader defended his decision last fall to appoint Conservative MP Rachael Harder, who has not previously supported legalized abortions, as chair of the status of women committee – a bid that was ultimately blocked by the Liberals and NDP.

"The Liberals showed how intolerant they are, and how they don't actually believe in people's rights to hold personal beliefs," said Mr. Scheer, a 38-year-old father of five.

Mr. Scheer, who himself is anti-abortion, has repeatedly said he won't bring forward any government legislation on the issue. He and other top Conservatives are set to speak at February's Manning Networking Conference in Ottawa, a major event hosted by the Calgary-based conservative Manning Centre think tank. One of this year's sponsors is the "We Need a Law" organization, which advocates for abortion legislation to protect "pre-born humans."

On gay and lesbian rights, Mr. Scheer said there are many ways to show support for the community aside from Pride parades. He pointed to a motion he introduced last June, which called on the government to condemn Russia for its persecution of the LGBT community in Chechnya, as well as his support for Mr. Trudeau's recent apology to sexual minorities.

"Not everybody marches," Mr. Scheer said. "There are other ways that I've chosen to show support for the community."

Mr. Scheer called the Liberals' attempts to paint him as a social conservative extremist who would scale back women's rights "fear mongering and character assassination." As an MP, he voted with most in his party against the same-sex marriage bill in 2005 and in favour of a 2016 private member's bill that would have made it a criminal offence to cause injury or death to a "preborn child" while committing a crime against a pregnant woman.

"I've made it very clear that I won't reopen those issues. And my position hasn't changed," he said.

Instead, Mr. Scheer said he considers himself a "full spectrum Conservative" and says "my job is to make sure our caucus and our movement is united. That means not bringing up divisive issues that would divide even our own party."

Mr. Scheer, who was elected party leader last May, said his party won't formalize its policy platform until after the Conservative convention in Halifax in August. But he said the first order of business if he forms a government would be to repeal the federal carbon tax plan.

Mr. Scheer also said it's a mistake for the Liberals to proceed with the $35-billion Canada Infrastructure Bank, as well as the nearly $500-million investment Canada is making in the China-led Asian Infrastructure Investment Bank to fund projects outside the country.

He reiterated his view that the time is not right for a free-trade deal with China.

"Until China's economy becomes more open and less affected by their own government, then I don't think it's in Canada's best interest," he said.

Mr. Scheer added that his party supports the concept of net neutrality, the rules that require all internet traffic be treated equally. This comes in contrast to his innovation critic and former leadership rival, Conservative MP Maxime Bernier, who publicly advocated against it in favour of less government control and more free competition.

"Conservatives, we work as a team and we have these kinds of conversations," Mr. Scheer said. "But at the end of the day, when the caucus takes a final decision on a position, then the rest of the MPs are asked to support that."

Andrew who?​ In search of Scheer’s still-elusive Conservative identity
October 6, 2017 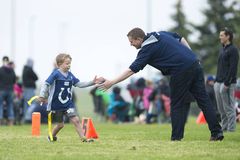 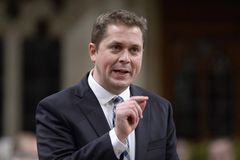