The Conservative minister responsible for the national capital region says he supports plans to construct a large monument to the victims of communism next to the Supreme Court of Canada in spite of a growing campaign to locate the memorial somewhere else.

Employment Minister Pierre Poilievre, who is also the minister responsible for the National Capital Commission, said the monument is a better option than original plans to build a new Federal Court building on the Wellington Street site, which is currently a grassy park-like area.

Mr. Poilievre represents the riding of Nepean-Carleton, which is a mostly rural region south of Ottawa.

"This is a visible site that would give appropriate recognition to the eight million Canadians who trace their roots to countries oppressed by communism and also to the soldiers who fought communism in the Korean war so I have no problem with the location," he said.

Ottawa Mayor Jim Watson, local NDP and Liberal MPs and the Chief Justice of the Supreme Court are among those who have expressed concern with the current location.

Architects have also objected to the size of the monument, which would be larger than the National War Memorial at the east end of Wellington Street.

The Royal Architectural Institute of Canada and the Ontario Association of Architects have called for it to be put in the Garden of the Provinces and Territories, which is about two blocks west of the current site.

Mr. Poilievre declined to comment on the size of the monument.

"That's a decision for the architects and the Tribute to Liberty organization that is putting the project forward," he said.

However, the size, and other aspects of the design, are subject to oversight by the NCC's advisory committee on planning, design and realty. The NCC's board of directors, when it approved the memorial in 2013, ignored advice from that committee.

"We were all unanimous in expressing our opposition," Paul Bedford, the former chief planner of Toronto who sits on the committee, recently told The Globe. "The Wellington Street site is clearly a prime building site and should be reserved for a prestigious building that is part of the capital precinct."

"I only hope that a more appropriate site can be found for the victims of communism memorial," Mr. Bedford added.

There have been suggestions that construction on the project could begin this summer, however the government has not confirmed a timeline.

The height of the monument has already been reduced to 12 metres from the original proposal of 14 metres.

The architect in charge of the project – Voytek Gorczynski of ABSTRAKT Studio – told The Globe that he is facing pressure from federal officials to approve further changes to the design.

In a February interview, Mr. Gorcynski said that his design team was looking for new images, which represent migration to Canada, to appear on the monument instead of the depiction of a Second World War massacre that had originally been included in the proposal. "Quite frankly this is because of the pressure we are under" from staff co-ordinating the project for the Ministry of Canadian Heritage, he said. Ministry staff had suggested some specific images, he said. He declined to be more specific.

This reflects a shift in emphasis that focuses more on Canada's role as safe haven rather than on the crimes of communist states. A January 2014 request for proposals document from the heritage department titled the project "Memorial to the victims of communism: Canada, a land of refuge." That subtitle was later dropped. 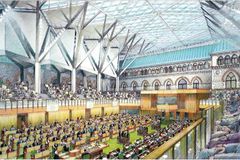 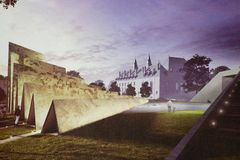 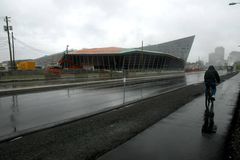 Follow Bill Curry and Alex Bozikovic on Twitter @curryb @alexbozikovic
Report an error Editorial code of conduct
Due to technical reasons, we have temporarily removed commenting from our articles. We hope to have this fixed soon. Thank you for your patience. If you are looking to give feedback on our new site, please send it along to feedback@globeandmail.com. If you want to write a letter to the editor, please forward to letters@globeandmail.com.
Comments