The federal Green Party has emerged from its national convention deeply divided over an issue – Israel – that some members worry may alienate voters as it eyes a possible electoral breakthrough in 2019.

Delegates voted Sunday at the biennial convention in Ottawa to support an international boycott, divestment and sanctions [BDS] campaign against Israel for its alleged failure to accord equal rights to Arabs in Israel and occupied Palestinian territories, despite opposition from party Leader Elizabeth May.

"I'm deeply disappointed," Ms. May said after the vote, on the heels of an emotionally charged debate among delegates at a downtown hotel. "The party policy on this issue is a position I can't support," she said, calling BDS tactics ineffective and "polarizing."

The BDS campaign has drawn the support of other Green parties, universities, churches, trade unions, entertainers and scientist Stephen Hawking. Parliament voted in February to condemn the BDS movement, which has been vociferously opposed by Israel.

Party president Ken Melamed struggled to contain the fractious discussion, cutting off speakers as he tried to ensure both sides were heard. "There are many issues that concern Canadians … and I think [we] need to remember that we act on their behalf," he said sternly at one point as the BDS discussion threatened to drag on. Like other federal parties, the Greens support a two-state solution and Israel's right to exist.

Opinions among Greens were sharply divided. "I've never felt prouder to be a member of this party," said Dimitri Lascaris, a past Green candidate and the party's justice critic, who tabled the motion. "We took a brave stand today for human rights," despite facing accusations of anti-Semitism, he said. He added some Jewish delegates supported the position.

Richard Zurawski, a past Green candidate, called the BDS vote "distressing" and "destructive for the party. Any time we polarize things like this … you lose people. I feel marginalized by this vote."

"Every country has its issues," he added. "When we specifically single out Israelis, I worry about the buzzwords and subtext and code language, which is anti-Semitic."

The party "just hurt itself," said Jean-Luc Cooke, a past Green candidate and the party's small-business critic. "I'm in a state of disbelief, frankly, that we chose such polarizing language to talk about something that is full of nuance. … It dominates the narrative of what comes out of this convention. I don't agree with it, I don't like having that over me going into [the next] election."

The BDS motion was one of two foreign-policy resolutions – both aimed at Israel – at the convention, which overshadowed another 30-plus issues debated by 300 delegates. The other resolution called upon the Canada Revenue Agency to revoke the charitable status of the Jewish National Fund over allegations it had planted trees over the ruins of Palestinian villages. Ms. May also opposed that motion, and delegates voted for a compromise, instead calling to revoke the charitable status of any organization complicit in human-rights violations.

The debate came as Green delegates heard that the next election could benefit the party should the government change the electoral system from a first-past-the-post count to one favouring proportional representation. The Greens earned just 3.5 per cent of the vote last year, but polls showed its support shrivelled near the end as voters feared they would be wasting ballots on candidates with no chance of winning, said pollster Frank Graves, who addressed the convention. If the Greens won 10-per-cent voter support under new voting rules, they could get 30 seats "and move from having no real influence … to holding the balance of power in a minority Parliament," said the president of EKOS Research Associates.

But he added that adopting the BDS motion could be a "risky strategy," as Canadians tend to hold "relatively moderate" views on Israel-Palestinian affairs. The Jewish National Fund and Canada's Centre for Israel and Jewish Affairs condemned the motion's adoption in a joint release.

The grassroots environmentalist party prides itself on its democracy, meaning member-led motions have a greater chance of making it to conventions than is the case in other parties. As for how voters react to the Greens' new policy, a neutral Mr. Melamed said: "I'm not sure. We'll have to see what the fallout is. It does distinguish us." 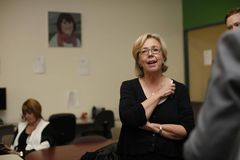 Green Party shuts down in Nova Scotia due to lack of support
June 15, 2016 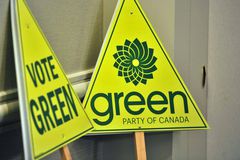 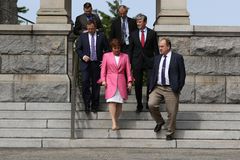