An Inuit group and the federal government are creating a national marine conservation area in Lancaster Sound that will be – by far – Canada's largest, Gloria Galloway writes

The federal government has reached an agreement with local Inuit that will lead to the protection and management of a massive swath of northern sea in one of the most ecologically sensitive regions of the Canadian Arctic.

The new proposed boundaries of a national marine conservation area in Lancaster Sound, which has sometimes been called the Serengeti of the Arctic because of the breadth of its biodiversity, would encompass more than 131,000 square kilometres of ocean.

That is 10 times larger than the biggest of the four existing national marine conservation areas, more than twice as large as any other protected area on land or sea, and would more than double the area of Canada's marine protected waters.

It also represents about 1.9 per cent of the country's expanse of ocean and would mark a significant step toward meeting its commitment, under the United Nations Convention on Biological Diversity, to conserve 10 per cent of coastal and marine areas by 2020. 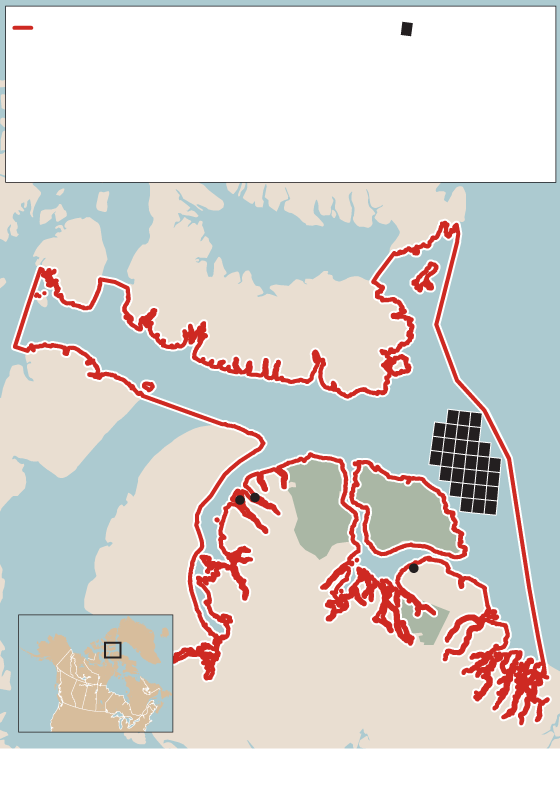 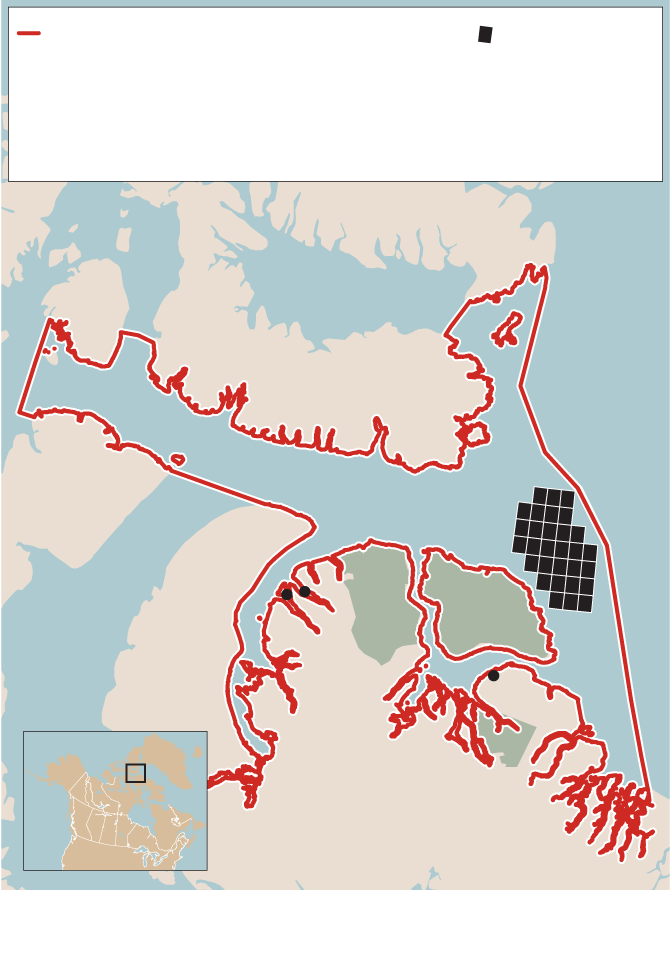 THE GLOBE AND MAIL, SOURCES: NATURE CONSERVANCY OF CANADA, 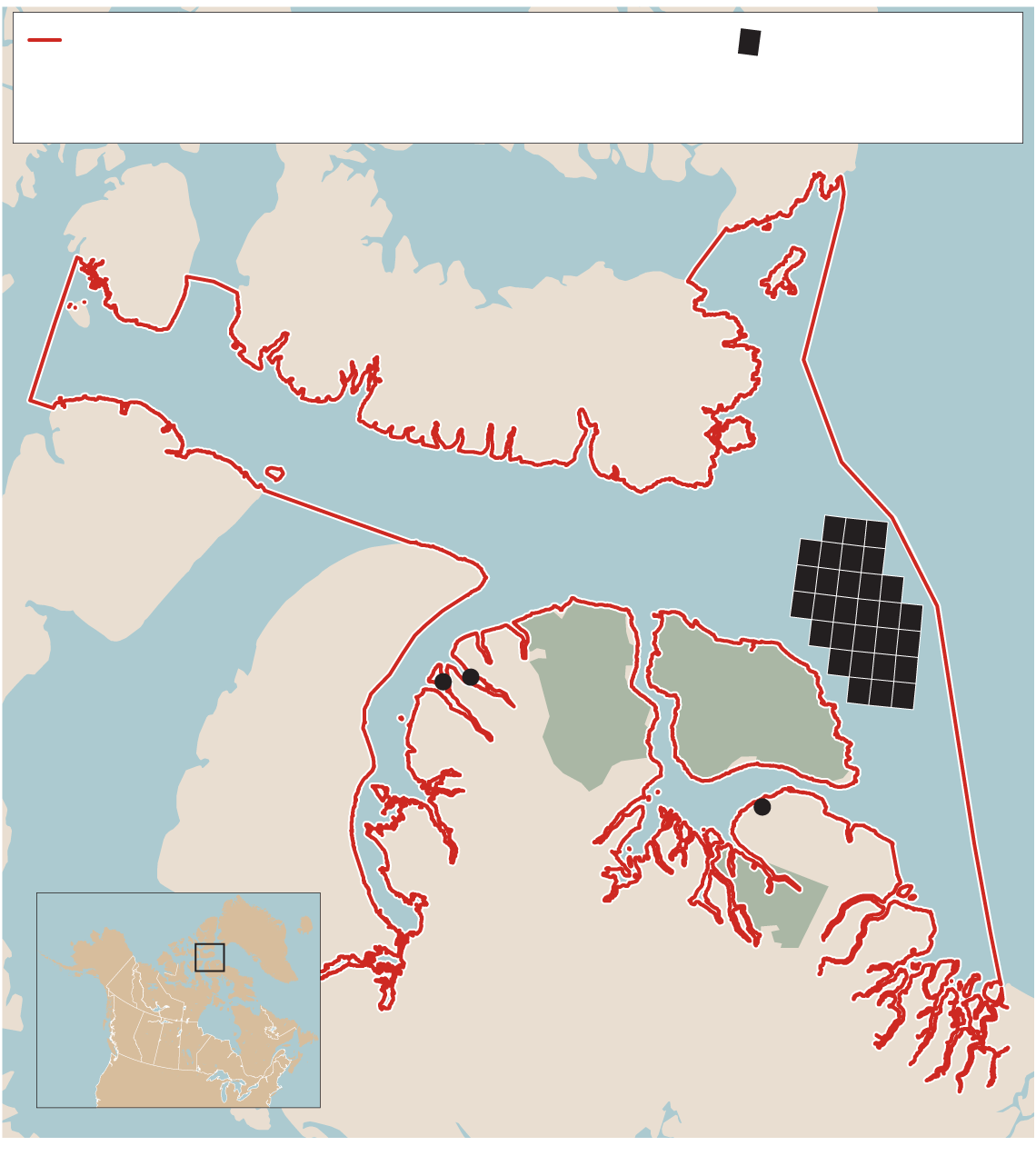 (expected to be similar to boundaries announced

on Monday by federal government)

The boundaries of the proposed new marine protected area, which will be announced by federal Environment Minister Catherine McKenna on Monday at Pond Inlet, Nunavut, would expand the Lancaster Sound marine conservation area well beyond what was contemplated in 2010 when the former Conservative government discussed protecting 44,500 square kilometres of ocean – an area twice the size of Lake Erie.

It would also be much bigger than the proposal to protect 48,000 square kilometres of marine territory that was put forth by Parks Canada in 1987.

The protections will be formalized when an impact and benefit agreement has been signed with the Inuit who have been lobbying for the protections for more than three decades.

The proposed size of the conservation area more than meets the expressed wishes of the Qikiqtani Inuit Association, which represents 14,000 Inuit, including those living in communities such as Pond Inlet that border on Lancaster Sound.

Because the water remains open in winter, the sound is a habitat for narwhal, beluga and bowhead whales, seals, walruses and polar bears, all of which are integral to the Inuit diet and traditions. With hundreds of generations of accumulated knowledge, the Inuit will take an active part in ensuring that the region is protected.

"The expanded approach really is a recognition that marine areas are inherently fluid and that the way that species use areas is often expansive and there are these large migrations of marine mammals," said Chris Debicki, vice-president of policy development for Oceans North, a charitable group that promotes science- and community-based conservation of Canada's Arctic Ocean.

This broader area, Mr. Debicki said, "captures much more of the migratory paths of the species that are really critical for Inuit."

The announcement comes after a six-year feasibility study that looked at ecological values, traditional knowledge and tourism.

It also follows the decision last year by Shell Canada Ltd. to voluntarily hand over its rights to conduct oil and gas exploration on 8,600 square kilometres of sea floor to the Nature Conservancy of Canada which, in turn, gave them to the federal government. The oil company had had those rights since 1971, but had not engaged in exploration activities in the region since 1978.

While Lancaster Sound and the rest of the marine conservation area will remain open to ship traffic – the sound is the eastern entrance of the Northwest Passage – it would put the region out of the reach of mineral extraction, drilling for oil and seismic testing. There is already a moratorium in place that prohibits such activities on a temporary basis.

Mr. Debicki said the most important aspect of the agreement to establish a marine protected area in Lancaster Sound has been the participation of the Indigenous people and the intent to create a region that will remain open for hunting but closed to environmental degradation.

"I spend a lot of time personally in Pond Inlet and I see first-hand that the families who are doing the best, and the families that are really doing well in Pond and high Arctic communities, are the ones who are maintaining a close link with Lancaster Sound and with the marine region and with hunting."

John Lounds, president of the Nature Conservancy of Canada, said it is important to ensure that the boundaries of the marine protected area reflect not only biodiversity but Inuit culture and heritage.

"If the folks who live there and work there and believe in its future think that this should be where the boundaries are, and it dovetails with the biodiversity that should be conserved there, I think that is a wonderful coming together that doesn't often happen," Mr. Lounds said.

Spokesmen for the Qikiqtani Inuit Association were unavailable to discuss the announcement. The federal government was unwilling to discuss what is being proposed in advance of Monday's event.

While all environmental groups contacted for this story praised the expansion of the protected area, some said they hoped the government would not wait long to actually put the permanent protections in place.

"We'd be pleased with any announcement that includes meaningful protections for Lancaster Sound," said David Miller, president and CEO of World Wildlife Fund Canada. "Since Shell relinquished 30 oil and gas exploration leases last summer after a WWF-Canada lawsuit, there is nothing standing in the way of creating the largest marine protected area in Canada, with a boundary that is informed by traditional knowledge that will fully protect the integrity of this unique ecosystem."

Right now, a large portion of the world's narwhal are feeding within the area to be protected, with their newborn calves at their side, Mr. Miller said. " Bowhead whales, beluga, walrus, polar bears and countless migratory birds are stocking up on Lancaster Sound's bounty in the 24-hour daylight to get themselves through next winter."