Stephen Harper warned on the campaign trail that a "sea of troubles is lapping at our shores," yet the latest economic news suggests his government is underestimating the choppy waters ahead.

Finance Minister Jim Flaherty announced this week that he will be relying on the very same economic growth assumptions that underpinned his March, 2011, budget, which died before the election.

But that decision, which he announced Tuesday after consulting with private-sector economists, has some questioning whether Ottawa's June 6 budget is now relying on outdated and overly rosy growth numbers as it lays out a plan to erase the deficit.

A lot has happened in the economy since the March numbers were compiled, much of it negative. Growth in the United States is slower than expected; Japan was rocked by a devastating earthquake and tsunami; Europe's debt woes continue and Canada's latest growth numbers included worrying signs that consumers are closing their wallets.

Add to this a view among some economists that the average of private-sector forecasts on which Mr. Flaherty relies - that shows 2.8-per-cent growth in 2012 and 2.7-per-cent growth in 2013 - is papering over the negative hit Canada will take when the United States gets serious about its deficit to fend off nervous bond holders.

That's a main reason why Parliamentary Budget Officer Kevin Page released his own, independent forecast Wednesday that predicts slower growth in 2012 and 2013 - and Ottawa missing its target for erasing the deficit by 2015.

"We've got big issues in the United States," Mr. Page said. "We're watching the U.K. go through fiscal consolidation and it looks really painful. How is the U.S. going to escape its deficits … get it down to something meaningful, without having an impact on growth?"

The Bank of Canada's projection for growth in 2013 is actually lower than the PBO's, at 2.1 per cent. While 2013 is too far away for the central bank to be taking into account specific potential threats to the economy, the number is low enough that a major shock could send Canada tilting toward another downturn.

Derek Holt, an analyst at Scotia Capital in Toronto, agrees with Mr. Page that starting in late 2012 and into 2013 the biggest risk to Canada's economy could be whatever action, or inaction, Washington takes on the U.S. budget deficit.

"I can easily see a scenario where the minute [President Barack]Obama is probably re-elected, he comes with some sort of messaging about how 'this is going to hurt me more than it's going to hurt you, but we're going to be forced into austerity by the ratings agencies and the bond markets,' and he imposes a sharp contraction in 2013. That's got to be out there as a big, big question mark on the minds of a lot of central bankers, the Bank of Canada included.''

In April, Moody's ratings agency said the United States could lose its cherished triple-A rating if it doesn't come up with, and start implementing, a credible belt-tightening plan by 2013.

One of the private-sector economists who met with Mr. Flaherty this week, BMO's deputy chief economist Douglas Porter, says he's forecasting lower growth than the consensus forecast the government will be using in next week's budget.

"It looks a shade optimistic," he said of the average, though he still considers it a reasonable forecast for Ottawa to use.

Canadian Auto Workers economist Jim Stanford said recent events clearly show Ottawa's numbers are on the optimistic side. While there was strong first-quarter growth in this week's Statistics Canada data, he said those headlines masked the "very worrisome" drop in consumer spending that should lead Ottawa to reconsider its deficit-cutting plan.

"Spending cuts can be a self-defeating strategy to reduce deficits if economic growth is harmed in the process. This has been proven in spades in Greece," he said.

A spokesperson for Finance Canada notes that the average of the 15 private-sector economists includes growth estimates for 2013 that are "as low or lower" than the PBO and the Bank of Canada.

"This practice introduces an element of independence into the fiscal forecast, and has been supported by international organizations such as the IMF," Stephanie Rubec said. 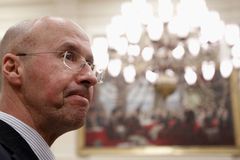 An 'unusually blunt' Jim Flaherty wades back in to budget swamp
May 31, 2011 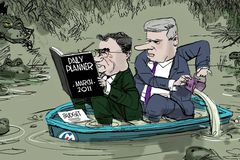 Flaherty to re-examine Canada's outlook
May 30, 2011
Follow Bill Curry and Jeremy Torobin on Twitter @curryb @jeremytorobin
Report an error Editorial code of conduct
Due to technical reasons, we have temporarily removed commenting from our articles. We hope to have this fixed soon. Thank you for your patience. If you are looking to give feedback on our new site, please send it along to feedback@globeandmail.com. If you want to write a letter to the editor, please forward to letters@globeandmail.com.
Comments