As Liberals prepare to unite around Justin Trudeau as their new leader this weekend, one of his rival candidates for the job warns the party is still divided on whether to embrace leftist or pro-business economic policies.

Martha Hall Findlay, speaking to The Globe and Mail, said her party "needs to clarify which one of those rather fundamentally different directions it will take" as it defines itself to Canadian voters.

She said while Mr. Trudeau "may walk away with the Liberal leadership," she felt it was important to run to champion the pro-business, pro-development, pro-trade policies that past party heavyweights have supported.

"I am of what I call the 'Martin, Manley, McKenna, MacLaren' persuasion," Ms. Hall Findlay said, referring to a series of former politicians who have been called "Blue Liberals" for their pro-business views.

Ms. Hall Findlay says she is "very progressive" on social issues but is also a "business-oriented free-trader" who "supports development of our energy and other natural resources."

Within the Liberal Party ranks today, however, she says there are "many Liberals who are economically protectionist, anti-'big corporations,' and anti-development environmentalists."

Ms. Hall Findlay said the leadership campaign has made little progress in distilling the economic vision that Liberals should pitch to Canadians because there was a "lack of real, substantive debate" in the race.

Ms. Hall Findlay said she respects that her fellow partisans are entitled to their views, and recognizes that "the Liberal Party has benefitted in the past from being a big tent," but cautions the time for mixed messages has passed.

"The party and its leadership need to be much clearer on economics and the 'hows' of achieving prosperity for Canadians," she said.

"In considering whether to support us in 2015, Canadians will want to know just what our vision for this country is, and how we propose to achieve it – with more than vague generalities."

She said the party is torn on how to fight NDP Leader Tom Mulcair and incumbent Conservative Prime Minister Stephen Harper. The Liberals have fallen to third place in the House of Commons after a disastrous showing in the 2011 federal election and have seen the NDP and Tories pick away at their support from either side.

Some Liberals now favour steering leftward to cut into Mr. Mulcair's flank, Ms. Hall Findlay says, while others want to steer to the right to create a more progressive pro-business alternative to the Tory Leader.

"There are some who suggest a two-election strategy – that the Liberal Party should 'go left' to take on Thomas Mulcair for 2015, and then focus on the next [ballot after that]."

On the other hand, Ms. Hall Findlay said, there are many others – including herself – that feel the Liberal Party is better off adopting an economically-oriented platform "that would attract a large number of disenfranchised progressive conservatives, business-oriented liberals and "Red Tories" in the next general election campaign."

She cites Mr. McKenna's opinion on the matter. "The other day [he] was quoted as having said that Canada needs parties that are 'of moderate inclinations, fiscally conservative, socially progressive and managerially competent'," the Liberal candidate said.

"In my view, three of the biggest issues that the Liberal Party will need to address prior to the next election, firmly and clearly, will be free trade, health care, and what we do about retirement and old age security."

"Some are free-traders like me, strongly believing that our future prosperity will depend on embracing global opportunities. Some are much more protectionist. Some will say that they support free trade, but, for example, continue to support supply management, which just doesn't fit with a pro-trade agenda," she said.

Canada's refusal to give up the supply management tariff walls will prevent this country from securing a deal with the Trans-Pacific Partnership trade talks and reduce its bargaining leverage with European Union trade talks.

(The Harper government, however, has also shown itself unwilling to jettison suppy management, and pledges it will not allow this farm protectionism be dismantled by international trade deals.)

On health care, Ms. Hall Findlay said, her fellow party members are also nervous about change. "Many, many Liberals balk at ideas such as greater private delivery within the single-tier publicly funded system ... or that greater competition in delivery could lead to greater innovation and efficiency," she says. They maintain this hesitation despite the success of operations such as the Shouldice Clinic, a pioneer in the for-profit surgery field that repairs hernias.

"One thing is clear – we can't just keep spending more and more money. So far, however, we have refused to take our heads out of the sand and have a frank discussion about this," the Liberal candidate says.

On retirement and old age security, she said the Liberals have to come up with innovative ideas to solve the problem of saving enough for Canadians' retirement. "The problem, as we know too well, is that people aren't saving enough for themselves ... [and] incentives like RRSPs only work for the minority that will probably be fine anyway," she said.

When Mr. Harper announced Canada would in the future raise the age threshold for receiving old age security benefits by two years to 67 – to save money – the Liberal Party should have had more to offer in the way of ideas. "The Liberal Party's reaction to Stephen Harper moving the OAS age to 67 was to simply say 'We'll move it back to 65,'" she said. "We need to get serious about this." 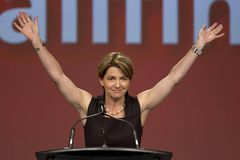 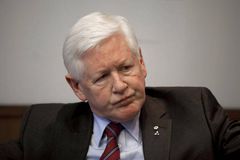