Canada is reviewing the security situation at its embassy in the Libyan capital of Tripoli in the wake of the killing of American diplomats in the eastern city of Benghazi, says Foreign Affairs Minister John Baird.

"As you would expect, we'll re-evaluate the environment as we regularly do for our personnel in Tripoli," Mr. Baird said Wednesday from India, where he was on an official visit.

Mr. Baird spoke after extremists killed the U.S. ambassador and three of his staff at a U.S. diplomatic post in eastern Libya.

"It's an attack on diplomacy," he said, adding that Foreign Affairs continually updates the security environment for Canadian personnel.

Mr. Baird said those responsible must be brought to justice.

Mr. Baird visited Benghazi in June, 2011, shortly after the uprising in the North African country that resulted in the ouster and death of former dictator Moammar Gadhafi.

He returned to Tripoli in October, 2011, to reopen the Canadian embassy, which had been closed for nine months after Canada joined NATO countries in launching air attacks on Libya to back rebel fighters trying to remove Col. Gadhafi.

"We call upon Libyan authorities to take all necessary measures to protect diplomatic premises in accordance with Libya's international obligations. We also urge Libyan officials to ensure the extremists responsible are brought to swift justice."

Defence Minister Peter MacKay called the attack "an act of violence that shocks us all."

"Canada, of course, has a vested interest in ensuring that we see security and a greater sense of stability spread within Libya," Mr. MacKay said.

"And we recommit ourselves and dedicate ourselves to that effort."

Ambassador Chris Stevens, 52, and three colleagues were killed when a group of embassy employees went to the consulate to try to evacuate staff.

One of the dead diplomats formerly served in the American consulate in Montreal.

"We grieve particularly for the death of information management officer Sean Smith," David Jacobson, the U.S. ambassador to Canada, said in a statement.

"Sean recently served at the U.S. consulate in Montreal. He and his family were a part of our mission family, and we extend to them our deepest condolences and sympathy.

"Each of us in the U.S. mission in Canada was shocked and saddened to learn of the deaths of our colleagues in Libya following the outrageous attack on the U.S. consulate in Benghazi."

Mr. Smith, described in reports as an online gaming enthusiast, was remembered fondly by one former State Department colleague as a devoted family man.

"He was a friend from the consulate and our children played often together when we were in Montreal," said the fellow diplomat, who spoke on condition of anonymity, calling Mr. Smith "a devoted father of his two children and a generous and committed U.S. diplomat."

Mr. Obama named Mr. Stevens and Mr. Smith, but said the families of their two fallen colleagues were still being notified.

"We will not waver in our commitment to see that justice is done for this terrible act. And make no mistake, justice will be done," Mr. Obama said.

The assault occurred Tuesday night in the eastern city of Benghazi when protesters with machine guns and rocket-propelled grenades stormed the consulate in what officials say was an angry response to a short film that ridiculed Islam and its founder, Mohammed.

U.S. Secretary of State Hillary Clinton blamed the deaths on a "small and savage group" of militants, and said the attack should "shock the conscience of people of all faiths around the world."

Mr. Stevens is the first U.S. ambassador to be killed in an attack since 1979, when Adolph Dubs was killed in Afghanistan.

On its website, Canada's Foreign Affairs Department is urging Canadians to avoid all travel to Libya, except for Tripoli and the Benghazi area, where only essential travel is recommended.

It was unclear Wednesday whether that advisory would be amended as a result of the attacks. 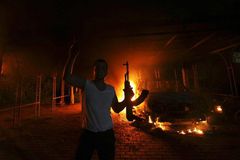 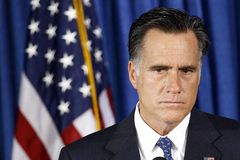 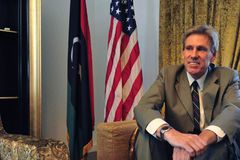 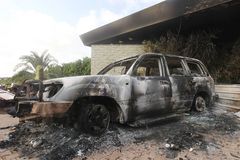